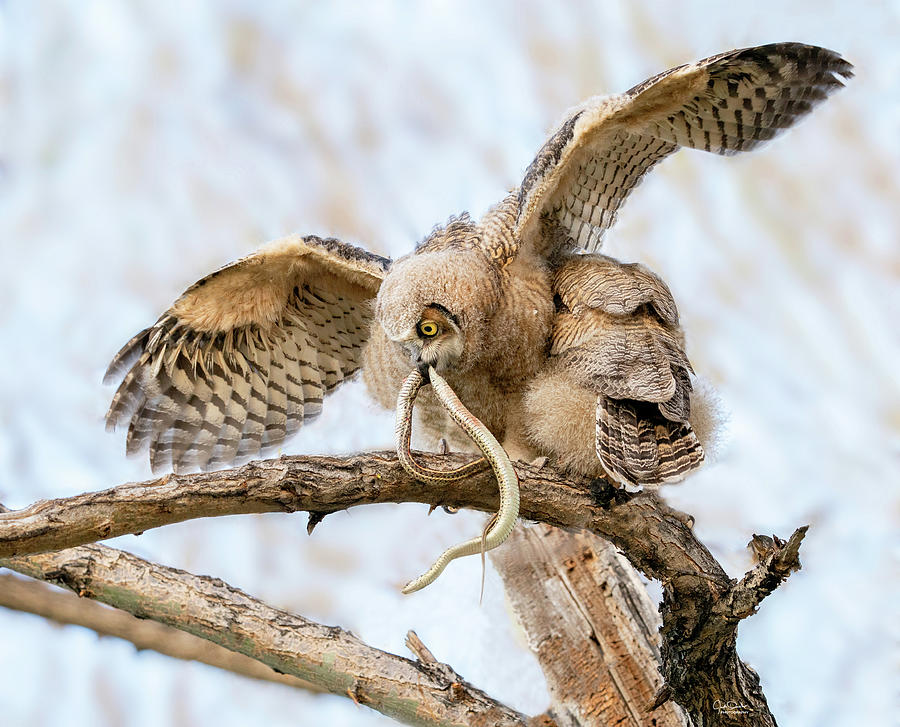 The story behind this photo was a blog post in the online magazine, including 8 images and the story written by me.

What an awesome and beautiful capture.

Hi Judi…I like your image. Actually, I love everything about it. This is a masterpiece…Your gallery is full of wonderful images. Outstanding photography…Cheers Bob fv

What an incredible capture!

This is stunning capture, well done!

What a capture Judi!

Outstanding shot!! congratulations on it's beauty.

What an amazing capture, Judi. Fabulous image of this beautiful young owl figuring out "How do I eat this thing?" L/fv/pin

Congratulations on your Top Finish in the contest… WILDLIFE IN NATURE! F/L

Thanks a lot, Jennie!

Thanks so much, Roe!

Fantastic photograph of a Great Horned Owlet, Judi! Congratulations on your first place finish in the Blow Our Minds contest! F/L/Voted

This is unbelievable, Judi. I can't imagine how you capture these moments! You're a master, that's for sure. like/f

Judi, Congratulations on your top finish in the BLOW OUR MINDS contest!

Good Friday morning to a sweet young lady and a virtuoso artist, I congratulate you, dear Judi, for your win in The Mindblowing photography group. The fact that you're the ultimate animal lover tells me that you do have a heart of gold. I like that.

Thank you, Bijan. Yes, I love animals. Bugs get caught and released from my house instead of getting killed, except mosquitos. I wouldn't be surprised if you do the same... :)

This is a magnificent work of art! Simply amazing!

Thank you so much, Michael!

Amazing capture, Judi! Congratulations on your top finish in the BLOW OUR MINDS WITH YOUR ANIMALS BIRDS AND INSECTS contest!

Wow, what a great shot. Love it.

Thanks very much, Anita

Congratulations on your tie for a 1st place win in the Blow Our Minds contest!

Congratulations on the shared 1st place in BLOW OUR MINDS WITH YOUR ANIMALS BIRDS AND INSECTS contest!

Thanks a lot, Ken!

Fantastic image, Judi, congratulations on your win in the BLOW OUR MINDS WITH YOUR ANIMALS BIRDS AND INSECTS contest!

Thank you so much, Jurgen!

Judi, congratulations on your 2nd place in the Mindblowing Animals Contest!

Thanks, Carmen! Actually it tied for 1st Place.

Wow this is amazing!

Voted your entry in the Blow Our Minds contest.

Thank you so much Maili!

Thanks a lot, Sandra!

Awesome capture Judi! Congratulations on your logo image for the Wildlife One A Day group!

What an amazing capture - so cool!

Thanks very much, Jennifer!