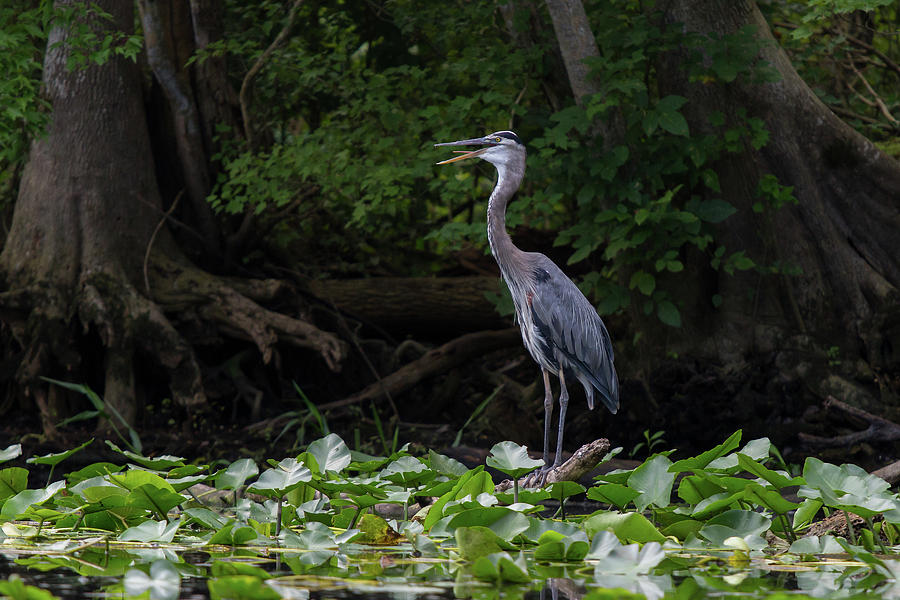 A great blue heron standing on a small log along the edge of the Ocklawaha River. The head is in profile with the beak open and the tongue held up, as they often do in the heat of a summer day, as this was. Spaterdock leaves cover the river in the foreground with the heron framed by the buttressed bases of two large trees on the riverbank.

This image has been featured in the following groups:
T100 100 plus views images Show CASE 1 a day
& Wildlife ONE A DAY

Great blues are the largest heron in North America and year-round residents of Florida, with migrating birds increasing the state's winter population. Great blue herons can be seen along the edges and in the shallows of both fresh and saltwater. The year-round range of Ardea herodias includes much of the United States, with summer breeding in the northern plains and the southern provinces of Canada. Winter populations extend throughout Mexico and Central America and along part of the northern coast of South America.
Standing about 1.25 meter (4 ft.) tall with a wingspan of 1.8 m (6 ft.), the body is mostly blue-gray. The head is white with a black stripe and short black plumes. The bill is long, thick and mostly yellow, juveniles having a dark upper bill. Legs are long, dull yellow to slaty-black, with rusty thighs. The front of the neck is striped black and white and the shoulder is black, with a bit of rusty coloring.
(Species description from the artist's Wild Florida Photo website www.wildflphoto.com)