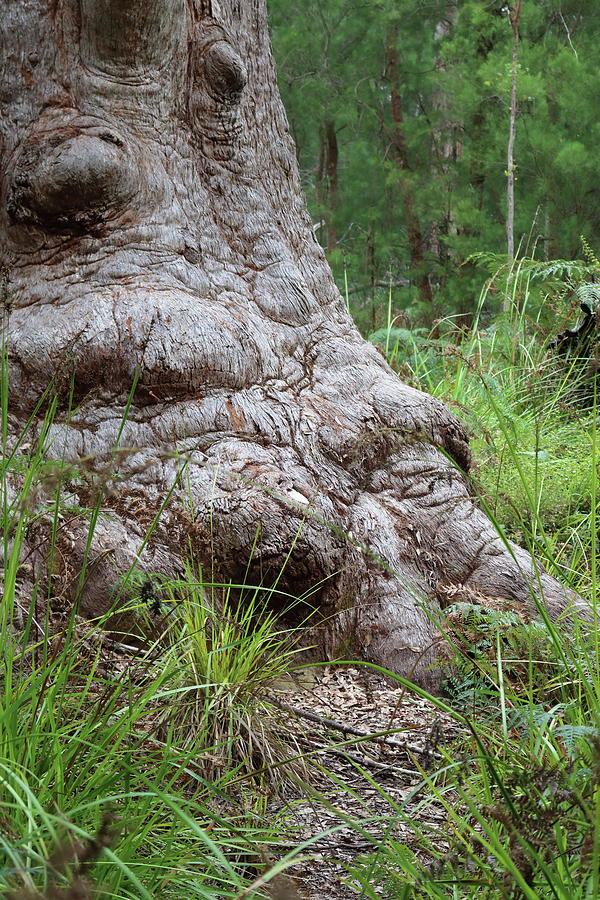 The Valley of the Giants, Walpole, Western Australia.

This is truly unique forest, a relict of ancient, more wet climate with numerous unique species of plants and animals. Here is the highest orchid diversity in Australia – 104 species, 37 plants from this area are exclusive – endemic. In the forest live some unique animals – such as the frog Geocrinia lutea or the relict species of spiders Moggridgea tingle and Micropholcomma lin-naei (the last was discovered in the fallen leaves of Giant Tingle Tree). These species have not been frozen in time but evolved, adapted to the changing environment.

The Ancient Empire is a 450 metre walk trail that takes you around and through some of the giant tingle trees including the most popular of the gnarled veterans, known as Grandma Tingle. The trail follows the story of the lost era of Gondwana.
The Ancient Empire is an interpretative trail that meanders across the forest floor in between 400 year old red tingle trees.

Eucalyptus jacksonii, commonly known as the red tingle, is a species of tall tree endemic to the south west Western Australia and is one of the tallest trees found in the state. It has thick, rough, stringy reddish bark from the base of the trunk to the thinnest branches, egg-shaped to lance-shaped adult leaves, flower buds in groups of seven, white flowers and shortened spherical to barrel-shaped fruit. Eucalyptus jacksonii is a tree that typically grows to a height of 8 to 55 metres (26 to 180 ft) and has thick, rough, stringy and furrowed grey-brown or red-brown bark. The trunk can have a circumference up to 24 metres (79 ft) round at the base and grow to a height of 75 m (246 ft). The crown is dense and compact, forming a heavy canopy

Lovely capture of this spectacular tree.

I just love old giant trees and this has a beautiful and interesting foot. I don't believe I have seen a Tingle Tree. Very interesting notes and photograph Michaela. L/F

Thanks Rita, they are immense here

What a lot of bumps and lumps on this tree.....leaves lots of room for the imagination. Like and favourite