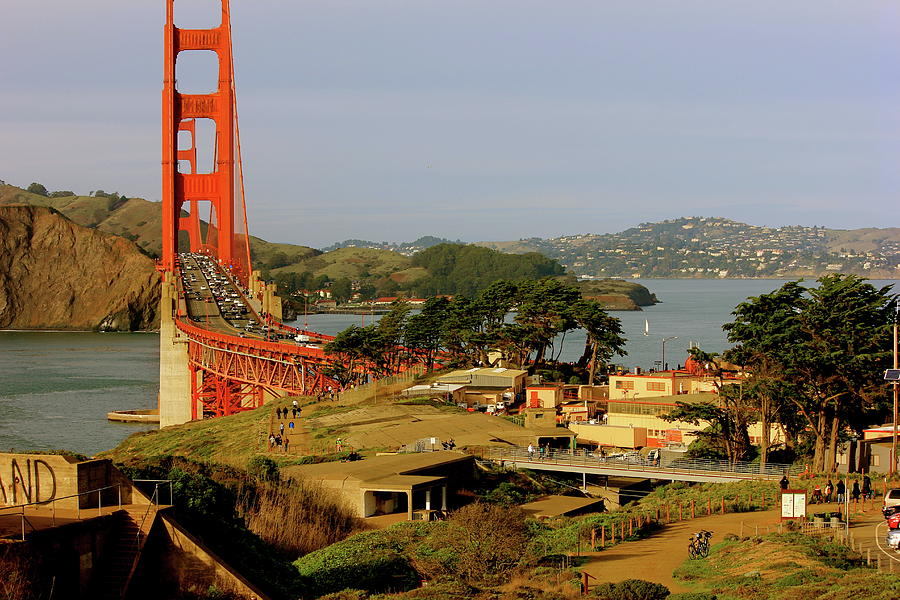 
Completed in 1937 the Golden Gate Bridge in San Francisco, California is one of the most famous bridges in the world and, at the time of its construction, was the longest suspension bridge in the world, with a total length of 2.7km (8,981ft). The steel bridge, which replaced a 20 minute ferry crossing from the city to Marin County to the north, was an enormous construction achievement. It had long been thought that to build a bridge at the location would be impossible due to strong currents, the depth of water in the Golden Gate Strait and the regular occurrence of strong winds and fog.

​Although proposals for a bridge had been talked about since 1916, it took many years for the project to get under way. It was intended to raise the cost of $30 million through the sale of bonds but this proved very difficult so soon after the Wall Street Crash and was only achieved when the Bank of America agreed to purchase all the bonds. Construction finally began in January 1933 and the bridge was finished four years later in April 1937.

The initial design by Joseph Strauss, an ambitious young engineer, called for two cantilever spans linked by a central suspension segment, but this was seen as unacceptable from a visual standpoint. The eventual graceful suspension design was conceived and championed by New York’s Manhattan Bridge designer Leon Moisseiff. Senior engineer Charles Alton Ellis, collaborating remotely with Moisseiff, was the principal engineer of the project.

Until 1964 the Golden Gate Bridge had the longest suspension bridge main span in the world, at 1,280m (4,200 ft). It now has the second longest main span in the United States, after the Verrazano-Narrows Bridge in New York City. The towers on either end of the bridge stand at 227m tall (746 ft) and the deck is 27m (90ft) wide. Median markers are changed to allow increased traffic flows north and south at times of high demand. The bridge’s distinctive colour was originally that of a protective sealant but it was soon apparent that the colour suited the surroundings and would stand out from the fog that regularly engulfs the structure. Known as International Orange it is now the official colour of the bridge.

In 2011 the American Society of Civil Engineers chose the Golden Gate Bridge for inclusion in its Seven Wonders of the Modern World.

Congratulations! Your beautiful artwork has been featured on the homepage of "Travel Art" group at Fine Art America, and saved on our Travel Art Group board on Pinterest: https://www.pinterest.com/travelways/travel-art-group-on-fine-art-america/ :) Please archive it in the specific travel category under discussions, and don't forget to promote it in our Facebook group ;)

Thank you for featuring my photography, Nature Landmarks L...

Thanks for the featured, Premium FAA Artis...