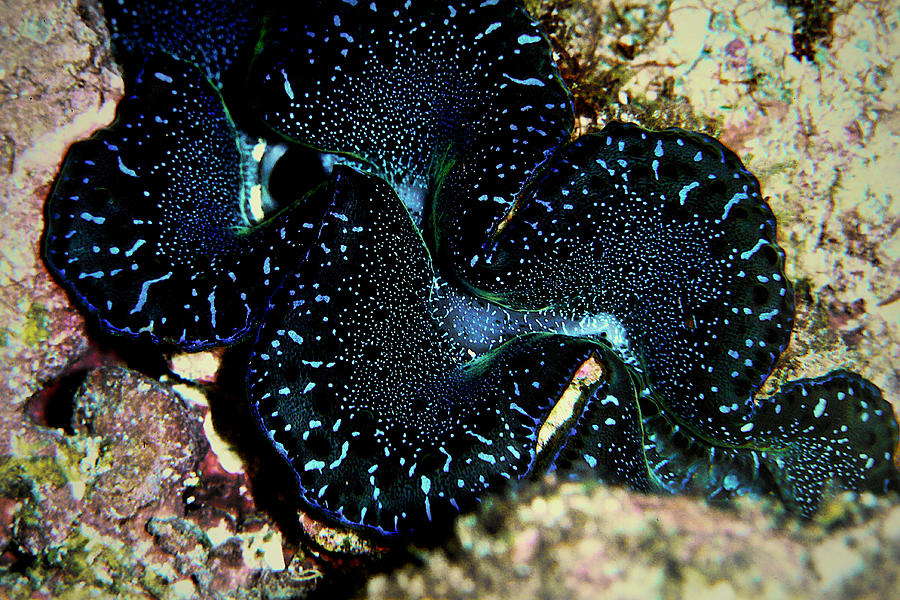 Giant Killer Clam found in the Marshall Islands Micronesia in the South Pacific, circa 1975

These bottom-dwelling behemoths are the largest mollusks on Earth, capable of reaching 4 feet in length and weighing more than 500 pounds. They live in the warm waters of the South Pacific and Indian Oceans.

The largest known specimen of giant clam was over four and a half feet (1.3 m) wide and weighed approximately 550 pounds (250 kg). The large majority of a giant clam’s mass is in its shell, with the soft parts accounting for only approximately 10% of the weight. Like most corals, some anemones, and other reef organisms, giant clams utilize a combination of methods to obtain food. The majority of their energy is derived from symbiotic algae living within their cells, providing the clams with excess energy that they make via photosynthesis (the use of sunlight to convert carbon dioxide into food/energy). In return, the algae have a safe place to live and receive the nutrients necessary to photosynthesize. The giant clams provides those nutrients by filter feeding small prey from the water above the reef surface, which it siphons through its body. The beautiful, bright colors characteristic of individual Giant Clams are actually a result of the symbiotic algae.

Though the soft body only accounts for about 10% of the body weight of giant clams, it is nearly pure, healthy protein, and this species has been hunted for at least several centuries. Unfortunately, this hunting has put the species at risk, and conservationists now consider it to be vulnerable to extinction.

Profits I receive from sale of Marine Animal fish photos in the will be donated to the preservation and restoration of our coral reefs. Mission Blue "Help us to build a network of Hope Spots large enough to save the blue heart of our planet" has been identified. Check it out https://mission-blue.org/2015/12/restoring-coral-gardens-in-fiji/