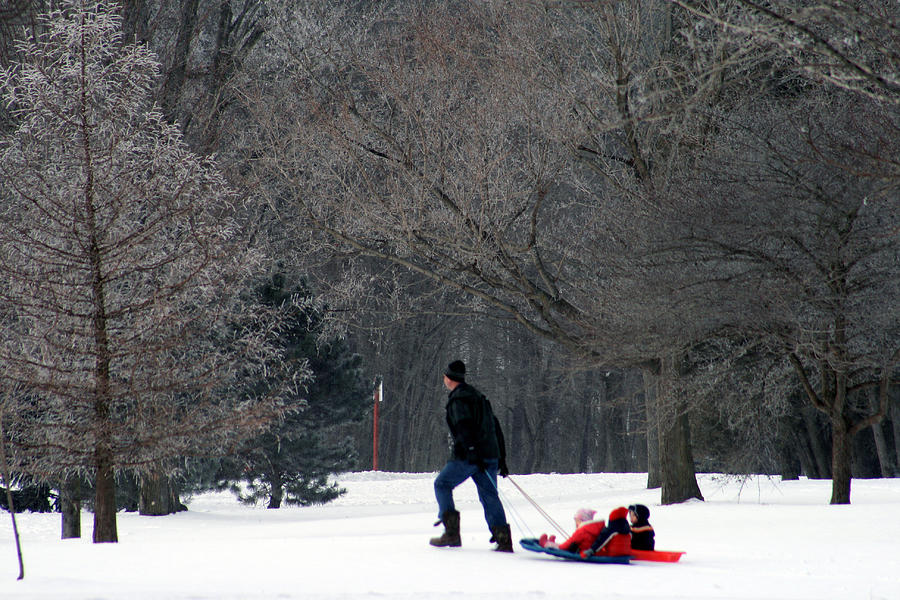 A young father pulling three children on two sleds in Petrifying Springs Park located in Kenosha County, Wisconsin.
The winter solstice is the solstice that occurs in winter. It is the time at which the Sun is appearing at noon at its lowest altitude above the horizon. In the Northern Hemisphere this is the Southern solstice, the time at which the Sun is at its southernmost point in the sky, which usually occurs on December 21 to 22 each year.
More evident from high latitudes, a hemisphere's winter solstice occurs on the shortest day and longest night of the year, when the sun's daily maximum elevation in the sky is the lowest. Since the winter solstice lasts only a moment in time, other terms are often used for the day on which it occurs, such as "midwinter", "the longest night", "the shortest day" or ""the first day of winter". The seasonal significance of the winter solstice is in the reversal of the gradual lengthening of nights and shortening of days.

Thanks so much, Kay!

Thanks so much for the nomination for a SPECIAL FEATURE in "1000 Views" group, Steve!

Thanks so much, Laurie!

Thanks so much, Carol!

What fun! Harkening back to when winter was fun - no diving and rushing to work in the ice and snow - just out having fun!

Fabulous! The tress form a great backdrop for the color.

Thanks so very much, Ann. Appreciated! kay

Thanks so much, Emmy.

I thank you so very much, John. Its always an honor to be featured in "Images That Excite You"!

Ella, thanks so very much for the homepage feature in "Beauty Captured" group.

Wonderful image of family. Great image for all time.

Nice photo! Love the frosty look of the trees! v&f

---ps--maybe I should read the other comments first---I see that it is a Christmas card---well it is a fun one--and love everything about it.

Kay--wow--this is a beautiful scene----and could be a Christmas card. voted

Thanks so much, Nava Jo.

A true blue, and lovely winter imagery of Wisconsin winter fun, Kay! Love the colors and the fun look of this photo op! fave and vote!

revisiting, Wonderful, saw this image in the Christmas Card 2012 in our Art Shoppe Cafe group.