Gazing Out From Within The Gila Ruins 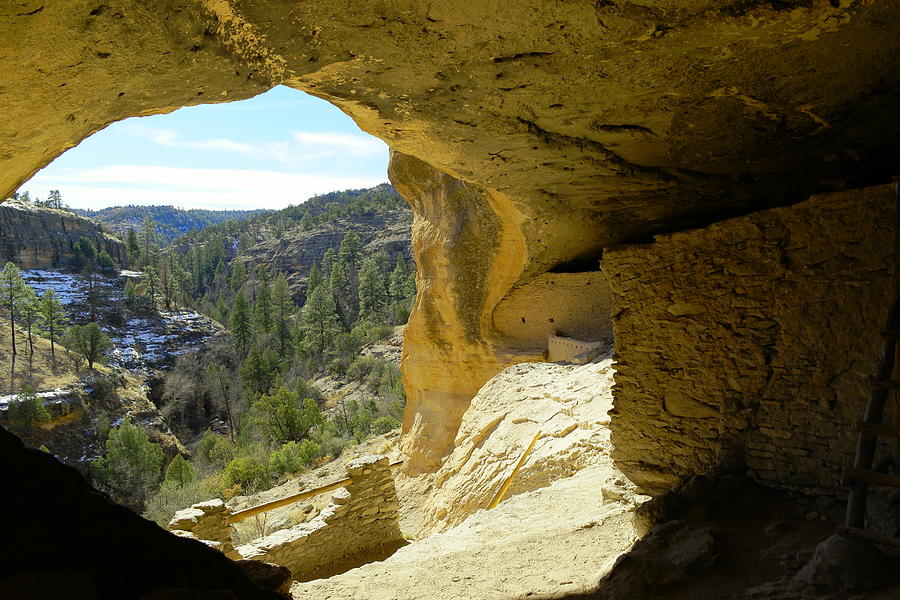 Gazing Out From Within The Gila Ruins

Gila Cliff Dwellings National Monument is a U.S. National Monument created to protect Mogollon cliff dwellings in the Gila Wilderness on the headwaters of the Gila River in southwest New Mexico. The 533-acre (2.16 km2) national monument was established by President Theodore Roosevelt through executive proclamation on November 16, 1907.[2] It is located in the extreme southern portion of Catron County. Visitors can access the Monument by traveling northbound from Silver City, New Mexico approximately 37 miles on NM 15.

Map of major prehistoric Oasisamerica archaeological cultures
Considered by archaeologists to be on the northernmost portion of the Mogollon People's sphere of influence, the Gila Cliff Dwellings National Monument is home to two prominent ruins sites among a collection of smaller sites located within the Gila Wilderness inside the Gila National Forest. The Monument landscape ranges in elevation from around 5,700 to 7,300 feet above sea level and follows the branches of the Gila River. The terrain around the ruins is rugged and arid, and contains steep-sided canyons cut by shallow spring rivers and mesas and bluffs forested with Ponderosa pine, Gambel's oak, Douglas fir, New Mexico juniper, pinon pine, and alligator juniper (among others). The area geologic history stems from the Oligocene epoch and volcanic activity that subsequently covered the area with ash. The Monument's hot springs are remnants of this volcanic history.

The Monument consists of 553 acres (2.24 km2) and contains the remains of a Mimbres Culture community in various locations, two of which are most prominent. The namesake ruins' developers made use of natural caves to build interlinked dwellings within five cliff alcoves above Cliff Dweller Canyon.[3] The TJ Ruins[4] are located on a bluff overlooking the Gila River.[5] The Mogollon Peoples are believed to have inhabited the region from between 1275 and into the early 14th century, during the Pueblo III Era.

Archaeologists have identified 46 rooms in the five caves on Cliff Dweller Canyon, and believed they were occupied by 10 to 15 families. The "Heart-Bar Site" or the TJ Ruins (named for the former ranch which the mesa takes its name from) located on TJ Mesa are largely un-excavated.[6] It is not known why the community was abandoned.

Hopi oral tradition refers to migrations occurred based cycles calendars, and in response to changing environmental conditions. Other ruins include Javalina House, about 1/3 mile above the main ruin, West Fork Ruin, currently under Highway 15 across from Woody Corral, Three Mile Ruin along the west fork of the Gila River, and middle fork of the Gila River at the 11 room Cosgrove Ruin. Dendrochronology (tree ring dating) determined that the wood used in the dwellings were cut between 1276 to 1287. The region provided for growing, gathering and hunting food.

To visit the namesake dwellings, requires visitors to hike a well-traveled mile (1.6 km) long trail loop with several foot bridges over a stream. The entire walk takes about an hour. The hike begins at an elevation of 5695 Feet (1736 Meters) and ends at 5875 Feet (1790 Meters).

Congratulations!! This beautiful image has been selected to be featured for the week in the “Art for Ever with You” Group Home Page. You are welcome to add a preview of this featured image to the group’s discussion post titled “2018 July: Stunning Group Featured Images and Thank-you’s” for a permanent display within the group, to share this achievement with others. If the activity is allowed, your image will also be posted to our group Google+ page. Thank you for your participation in the group! ~Jan (July 30, 2018)

Congratulations! Your fantastic photographic art has been chosen as a Camera Art! You are invited to archive your work in the Features Archive thread! group as well as any other thread in which it would fit!

Congratulations on your feature in Greeting Cards For All Occasions!

Congratulations! Your excellent work is featured on the Homepage of Fine Art America Group " All Natural Beauty Of This World "...Beth

Jeff Swan the New Mexico Land of Enchantment Group is honored that you chose to submit your work to the group and we are proud to feature your magnificent image on the Homepage in the Featured Images.

Jeff, Congratulations on your Sale!...L

I just love this picture......hanging in any home it would be a great conversation starter.....what beautiful country.....L/F