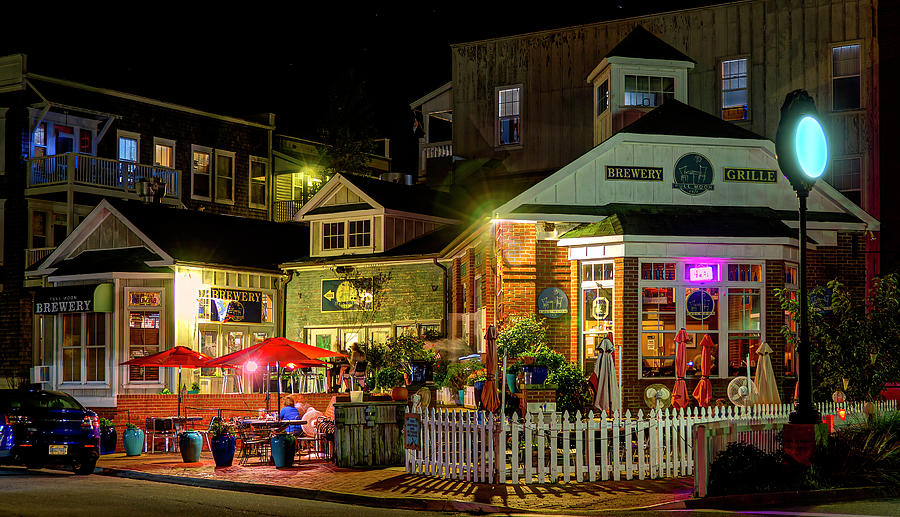 Full Moon Cafe has been a favorite dining destination on the Outer Banks since 1995. In 2011 we became The Full Moon Café and Brewery, your favorite brew pub. In 2013 we became the fastest growing locally crafted beer on the Outer Banks. By 2014 the beer we distributed to other restaurants became known as Lost Colony beer. Confusing? Was to us and to a lot of our loyal customers (even the sober ones). The search for The Lost Colony of Roanoke Island took on a new meaning as thousands of thirsty travelers with charts, treasure maps and smart phones in hand looked for the brewery.

We even asked ourselves: ”Who are we? Where are we”?

Well, we are The Full Moon Café. The one the NY Daily news called “brilliant”. The one the Boston Globe called “friendly, affordable and delicious”. The café the Philadelphia Enquirer, Washington Post and Atlanta Journal loved.

We are the Full Moon Brewery, winner of 8 World Beer Championship Medals. The brewery world renowned beer expert Charlie Papazion said had a Porter “as good as he has ever tasted”!

We are The Lost Colony Brewery, with beers in over 50 locations on the Outer Banks from Corolla to Orcracoke.

We are the home town restaurant where first dates, prom dates, wedding proposals, family gatherings, showers and birthdays have taken place for 22 years.

And now we are the Lost Colony Brewery and Café.

The Lost Colony Brewery and Cafe is located on a busy corner in the heart of downtown Manteo giving the restaurant a lively, happening feel. Dine outside under shady umbrellas or take a seat by a window indoors; either choice offers a great view of the activities in downtown Manteo. The atmosphere here is fun, un-stuffy and relaxed, with friendly service.

The food is diverse, delicious and incredibly fresh. We have high standards for freshness, flavor and presentation. Known for our perfectly prepared Angus steaks and fresh, local seafood. The menu also includes a surprising range of fare for everyone from seafood lovers to meat eaters to vegetarians to kids.

Right next door is our tasting room, a cozy bar where you can enjoy our funky and chill atmosphere while sipping on our homemade, award-winning beers

Today, county business still brings people to town, as well as many reminders of the island's history, including the representative 16th century ship at Roanoke Island Festival Park, or the George Washington Creef Boathouse and Roanoke Marshes Lighthouse, part of the North Carolina Maritime Museum. Each summer, the town welcomes singers, dancers, and actors back to Waterside Theatre, where they perform the nation's oldest outdoor symphonic drama, The Lost Colony.

Weather is always a topic on an island, and in Manteo, the day's weather report takes the form of signal flags flying from a restored US Weather Bureau tower.

I appreciate the FV and your great comment Rolando!!

Thank you very much Ann for your great comment and l/f!! :)

Thanks John for the feature in the Fine Art America Group "Images That Excite You!" and the fav!!