Frog Prince Or So He Thinks 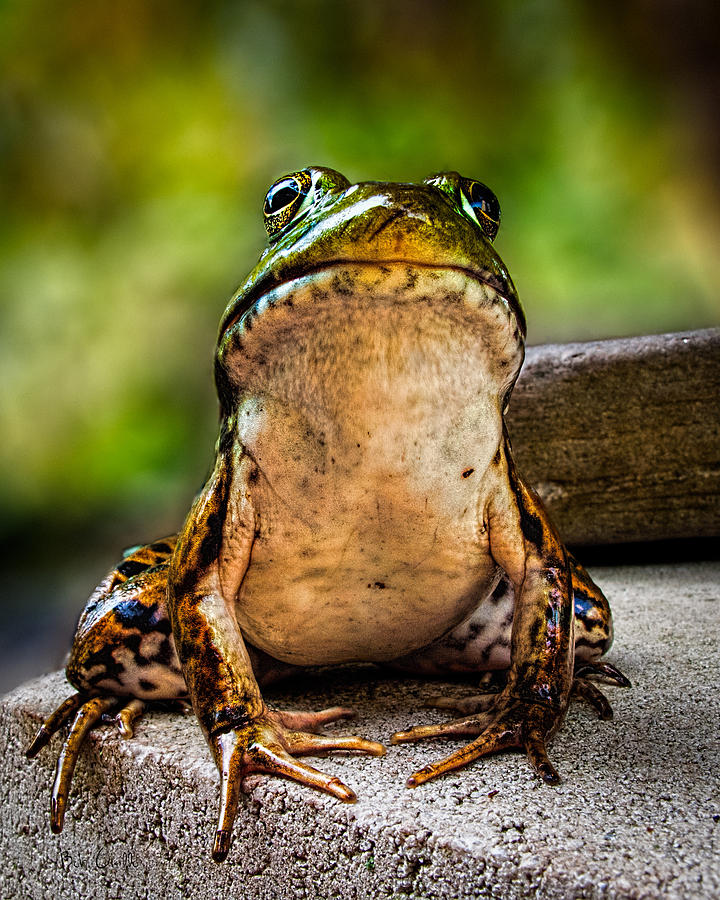 Frog Prince Or So He Thinks


Enter the domain of the prince of bull frogs, close up and personal from a ants eye view. Frog photography by Bob Orsillo.
Frogs are amphibians in the order Anura (meaning "tail-less", from Greek an-, without + oura, tail), formerly referred to as Salientia (Latin salere (salio), "to jump"). Most frogs are characterized by a short body, webbed digits (fingers or toes), protruding eyes and the absence of a tail. Frogs are widely known as exceptional jumpers, and many of the anatomical characteristics of frogs, particularly their long, powerful legs, are adaptations to improve jumping performance. Due to their permeable skin, frogs are often semi-aquatic or inhabit humid areas, but move easily on land. They typically lay their eggs in puddles, ponds or lakes, and their larvae, called tadpoles, have gills and develop in water. Adult frogs follow a carnivorous diet, mostly of arthropods, annelids and gastropods. Frogs are most noticeable by their call, which can be widely heard during the night or day, mainly in their mating season.

The distribution of frogs ranges from tropic to subarctic regions, but most species are found in tropical rainforests. Consisting of more than 5,000 species described, they are among the most diverse groups of vertebrates. However, populations of certain frog species are declining significantly.

A distinction is often made between frogs and toads on the basis of their appearance, caused by the convergent adaptation among so-called toads to dry environments; however, this distinction has no taxonomic basis. The only family exclusively given the common name "toad" is Bufonidae, but many species from other families are also called "toads," and the species within the toad genus Atelopus are referred to as "harlequin frogs".

Frogs have become a symbol in culture, and have also become rather popular exotic pets.

Great shot .... It looks like he has a lot to contemplate :)

He is so handsome!

Bob, this is such a great shot of this little fellow :~) F&L

The Prince looks so happy and content !!! Amazing capture with a lovely title,Bob ! (F/L)

Bob, what a delightful capture and title! Love this! l/f

He does look proud, and he has some beautiful jewel colors too - superb work Bob! LF

Congratulations, on your sale, great light!

Congrats, Bob, on your portrait sale of the Frog Prince. He looks like one to me!! :) kk

Congrats Bob - it's a cracker!

A frog with a regal bearing. Fantastic! Perfect title, Bob, and wonderful shot.

Bob ,Nice work great one but Ionly like the Little green frogs get one of them for me to see one day Love your work whatever it is , v/f

This is fabulous photography Bob. F/V

Bob, love the "ants eye" perspective. Thanks for the description; I now know everything there is to know about Old English frogga. vtd

Of course he is...my husband's favorite creature...it must be like him, a Prince...beautiful shot dear Bob.!! F/V.

Thank you Heiko and Helga, you might be right :))

Wow a great image Bob! Congrats on your sale!

Wonderful portrait! Congrats on your sale!

Congrats on your sale !!!

Ribbit! Congrats on your sale Bob!