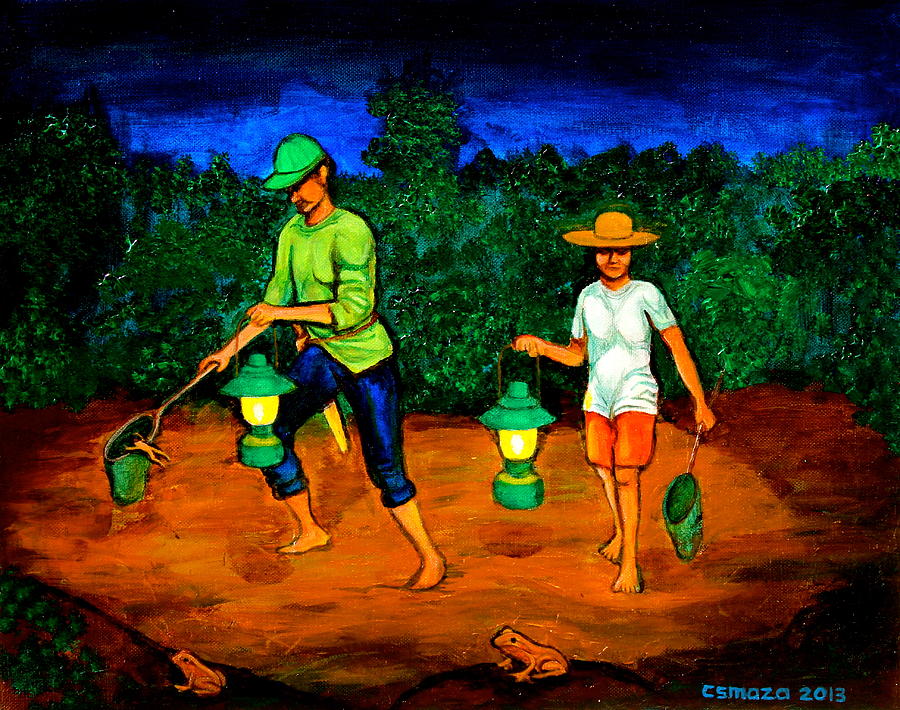 These two men (a father and a son) are hunting for frogs. Armed with lamps and nets, they venture into the night, walking barefooted on the muddy field, looking for some fresh frogs for their family's next-day meals.
.....
According to Wikipedia, "frog legs are one of the better-known delicacies of French and Cantonese cuisine. They are also eaten in other regions, such as Thailand, Vietnam, Indonesia, the region of Alentejo in Portugal, Spain, Slovenia, northwest Greece, and Northern Italy, as well as the Southern regions of the United States. Currently the world's largest exporter of frogs is Indonesia, also a large consumer. In regions such as Brazil, Mexico and the Caribbean many frogs are still caught wild. A type of frog called the edible frog is most often used for this dish. Frog legs are rich in protein, omega-3 fatty acids, vitamin A and potassium. They are often said to taste like chicken because of their mild flavor, with a texture most similar to chicken wings. The taste and texture of frog meat is approximately between chicken and fish. Frogs are raised commercially in certain countries, e.g. Vietnam. Frog muscle does not resolve rigor mortis as quickly as warm-blooded muscle (chicken, for example), so heat from cooking can cause fresh frog legs to twitch."
.....
This is an acrylic on canvas painting. I finished this painting on August 31, 2013.
.....
This is another scene painted from my childhood memories. I was a little kid back then, living with my family in a farm. Our house was nearly surrounded by rice fields with many frogs croaking and hopping around. I remember myself running after those frogs one night.
.....
This painting has been featured in the following FAA groups:
1.) Naive Art: September 1, 2013
2.) Life off the Grid: September 1, 2013
3.) Excellent Self-Taught Artists: September 1, 2013
4.) Comfortable Art: September 2, 2013
5.) Memories and Nostalgia: September 4, 2013
6.) Asian Artists: September 9, 2013
7.) Your Best Work: September 21, 2013

Cyril, I love this theme in your wonderful use of color painting . F/L.

Thanks, Michele, for appreciating this painting and the story behind it.

What a neat narrative piece, Cryril, that illustrates how people catch frogs...go out at night when they really come out! Love how the father and son are working together here to catch them! Fave! L/F/FB/P!

Thank you, Kimberlee. I really appreciate your comment and support.

I love this painting, Cyril! It is such a unique and fun subject matter.

Thanks, Harriet. I really appreciate your feedback.

Most interesting subject and story of this image, Cyril! You've captured the effect of the light falling from the lamps very well - liked!

Thanks for the feedback and support, Bonnie.

Love your work and enjoy reading your description! Shared them at Community > Discussions > Original Art, Story Or Journal > http://fineartamerica.com/showmessages.php?messageid=1653768

Thanks for your support, Xueling. I really appreciate it.

Wonderful paintings of the Philippines, Cyril. Am I correct? Beautifully done. F/L

You are correct. Thanks, Phyllis.

This is a fantastic image, Cyril! L/Fav

Wonderful storytelling and scene, and such beautiful color!!! :)))fv

Your work is very pure / V

Thank you so much, Juergen.

I'm glad you find my works enjoyable, Joyce. Thanks.

Lovely painting, Cyril! Looks like a fun time for everyone - except the frogs! V/F

Thanks for the compliment, Hanne.

Thanks for your support, BeautifulSky.

Wonderful description to a wonderfully delightful painting, Cyril. I love the story. f/v

What a great story - vfg