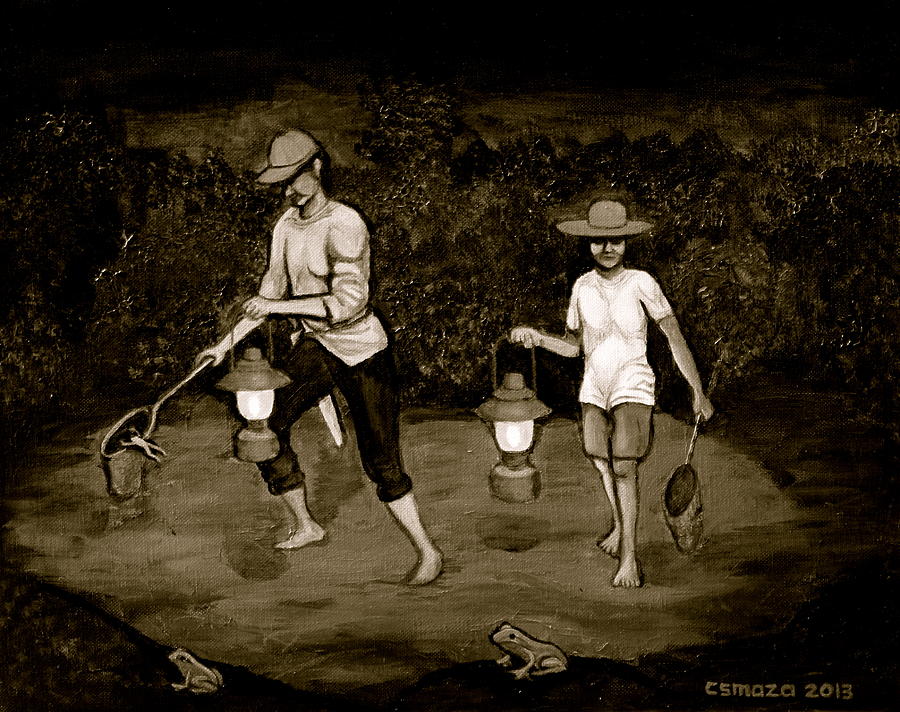 These two men (a father and a son) are hunting for frogs. Armed with lamps and nets, they venture into the night, walking barefooted on the muddy field, looking for some fresh frogs for their family's next-day meals.
.....
According to Wikipedia, "frog legs are one of the better-known delicacies of French and Cantonese cuisine. They are also eaten in other regions, such as Thailand, Vietnam, Indonesia, the region of Alentejo in Portugal, Spain, Slovenia, northwest Greece, and Northern Italy, as well as the Southern regions of the United States. Currently the world's largest exporter of frogs is Indonesia, also a large consumer. In regions such as Brazil, Mexico and the Caribbean many frogs are still caught wild. A type of frog called the edible frog is most often used for this dish. Frog legs are rich in protein, omega-3 fatty acids, vitamin A and potassium. They are often said to taste like chicken because of their mild flavor, with a texture most similar to chicken wings. The taste and texture of frog meat is approximately between chicken and fish. Frogs are raised commercially in certain countries, e.g. Vietnam. Frog muscle does not resolve rigor mortis as quickly as warm-blooded muscle (chicken, for example), so heat from cooking can cause fresh frog legs to twitch."
.....
This is a black and white photograph of my original acrylic-on-canvas painting called "The Frog Hunters." I finished the original painting on August 31, 2013.
.....
This is another scene painted from my childhood memories. I was a little kid back then, living with my family in a farm. Our house was nearly surrounded by rice fields with many frogs croaking and hopping around. I remember myself running after those frogs one night.
.....
This black and white photograph of the "Frog Hunters" painting has bee featured in the following FAA groups:
1.) Artist News: September 2, 2013
2.) Asian Perspective: September 7, 2013
3.) Asian Artists: September 9, 2013
4.) Your Best Work: September 21, 2013
5.) Life Off the Grid: December 11, 2014

I love this! Very nicely done!

Thanks for the compliment, Kathryn.

Thanks for the feedback and support, Michele.

not only a nicely done painting but you gave some interesting facts about frog legs.

Very nice also in this version!

This is one of my favorites of yours, Cyril!

Thanks for the feedback, Kathy.

I love this! Beautiful image. v/f

Great work! I like the exciting nighttime adventure feel, the black & white adds to that! V

Thanks, Thomas. I'm glad you love it.

Thanks for liking, Viggo.

L/F I love the sepia tone in this paiting. It is what attacked my attention and I have to click to see the larger image. Very nice story tellling in this scene. Love those bright lamps! The one frog looks like he is hopping into the net all by himself!

Thanks for the feedback, Linda. I'm glad you love it.

This is very unusual for your colourful gallery :) But nice, liked:)

i love this art work , v

I'm glad you do. Thanks, Mark.

What an interesting piece Cyril! We added our Like! Celebrate life, Debra and Dave

Thanks, Debra and Dave.

Wow! This is great! I love the mood.

Thanks for the feedback, Dan.

I can relate to this image. Excellent treatments. f/v

Very nice painting, Cyril! I like the black and white.

Thanks for the feedback, Colleen.