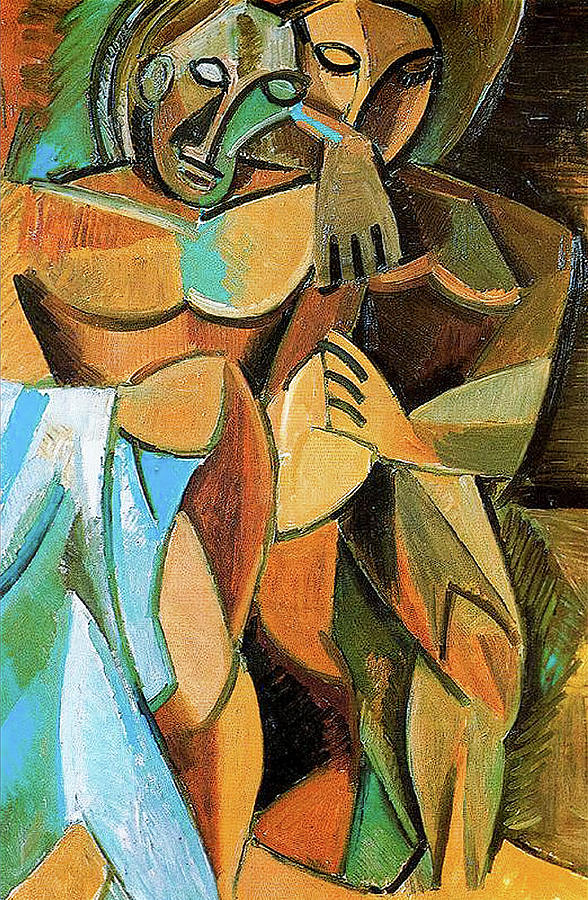 Picasso painted Friendship in 1908. Executed with with great fluency and confidence. It has been interpreted as an image of both lesbian and heterosexual love, but since Picasso concealed the figures' genitals and endowed each with a massive physique of ambiguous gender they were perhaps supposed to be the androgynes of 'primitive' ancestor myths.

Androgyny fascinated Gauguin, and in his Tahitian paintings men and women alike have the same hulking, thick-waisted bodies, tree-trunk limbs and big, rugged hands and feet (see Where Do We Come From? What Are We? Wher Are We Going?). One of Picasso's most prized possessions was a copy of Noq Noq given to him by Charles Morice, and where Gauguin's interest in androgyny emerges in, for example, a famous passage where he describes seeing a young Tahitian man and pursuing him lustfully in the mistaken belief that he was a girl. Now that Picasso had become interested in Polynesian sculpture himself, now that he owned a Marquesan tiki which Gauguin himself would certainly have appreciated, he may have felt a return of those feelings of identification with his former favorite. In Friendship the match between Gauguin's Tahitian work and 'reasonable' Polynesian carvings, such as the large tiki, was not arbitrary and reflects a proven historical connection.