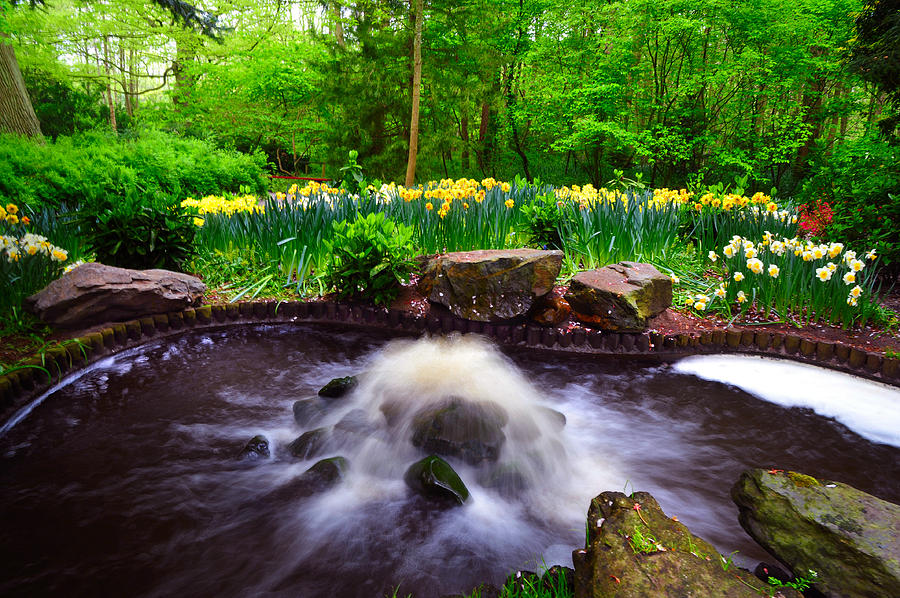 Keukenhof (Kitchen garden, Dutch) also known as the Garden of Europe, is the world's largest flower garden. It is situated near Lisse, Netherlands. According to the official website for the Keukenhof Park, approximately 7,000,000 (seven million) flower bulbs are planted annually in the park, which covers an area of 32 hectares.
Keukenhof is located in South Holland in the small town of Lisse, south of Haarlem and southwest of Amsterdam. It is located in an area called the "Dune and Bulb Region" (Duin- en Bollenstreek).
Keukenhof is open annually from mid-March to mid-May. The best time to view the tulips is around mid-April, depending on the weather.

Keukenhof is situated on 15th century hunting grounds. It was also a source of herbs for Jacqueline, Countess of Hainaut's castle, which is the source of the name Keukenhof (it served to provide herbs for the castle's kitchen). Rich merchants took over the grounds after the Countess's death. VOC captain and governor Adriaen Maertensz Block lived there in his retirement years in the 17th century in the country house (now known as Castle Keukenhof) which he had let built in 1641.
In the 19th century, the Baron and Baroness Van Pallandt assigned the landscape architect Jan David Zocher and his son Louis Paul Zocher, who had also worked on the Vondelpark, to design the grounds around the castle.[3]
The garden was established in 1949 by the then-mayor of Lisse. The idea was to present a flower exhibit where growers from all over the Netherlands and Europe could show off their hybrids and help the Dutch export industry (the Netherlands is the world's largest exporter of flowers). Keukenhof has been the world's largest flower garden for over fifty years.

In 2005 the park was opened by Her Royal Highness Princess Margriet.

Different gardens and garden styles go hand in hand at the Keukenhof. For example, the English landscape garden with winding paths and unexpected see-through points (designed by Zocher in 1830, the garden architect of the Vondelpark in Amsterdam, among others). There is a Historical Garden, an enclosed garden where you can see many old types of bulbs. You can visit a nature garden, which consists of a water garden, where shrubs and perennials are combined with bulbous plants. And the Japanese country garden, a playful non-traditional garden in a natural environment.

What a pretty place! Nice composition.