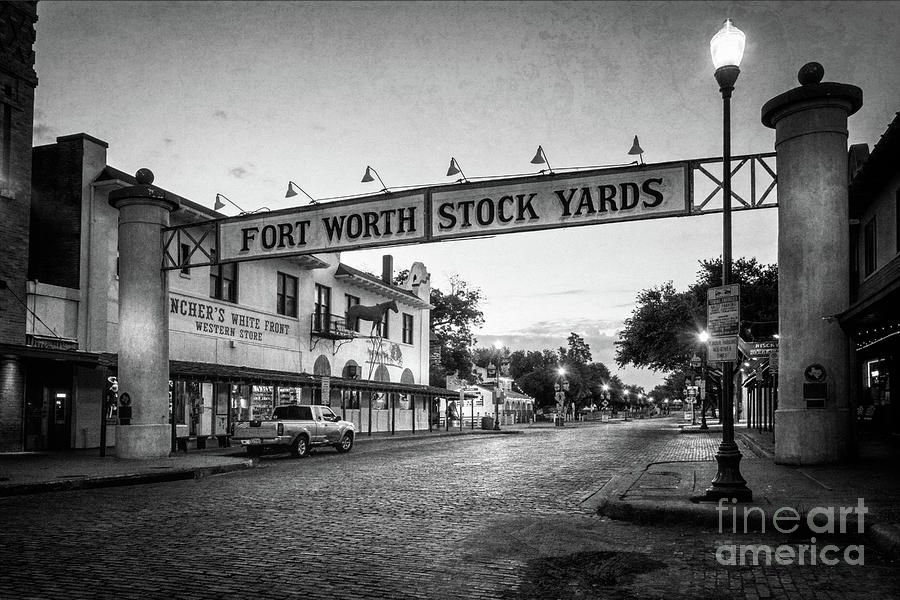 There is no indication at dawn that this area will be bustling with tourists later in the day! This is the Fort Worth Stockyards, a historic district that is located in Fort Worth, Texas, north of the central business district. The 98-acre (40 ha) district was listed on the National Register of Historic Places as Fort Worth Stockyards Historic District in 1976. The area is a former livestock market which operated under various owners from 1866. The arrival of railroads in 1876 made the area a very important livestock center. Fort Worth Union Stockyards opened for business on January 19, 1890, covering 206 acres. On February 7, the Fort Worth Dressed Meat and Packing Company was founded. This facility was operated without profit until purchased by G. W. Simpson of Boston. In an effort to produce revenue, they reached out to the Swift and Armour companies to establish packing houses. By 1886 four stockyards had been built near the railroads. Boston capitalist Greenleif W. Simpson, with a half dozen Boston and Chicago associates, incorporated the Fort Worth Stock Yards Company on March 23, 1893, and purchased the Union Stock Yards and the Fort Worth Packing Company. By 1907, the Stockyards sold a million cattle per year. The stockyards was an organized place where cattle, sheep, and hogs could be bought, sold and slaughtered. Fort Worth remained an important part of the cattle industry until the 1950s. Today, The Stockyards consist of mainly entertainment and shopping venues that capitalize on the "Cowtown" image of Fort Worth. Home to the famous boot making company M.L. Leddy's which is located in the heart of the Stockyards and The Maverick Fine Western Wear and Saloon where customers "can 'belly up' to the bar, relax and have a cold beer while in the Stockyards; just like they did in the days of the big cattle drives".

One of your peers nominated this image in the 1000 views Groups nominated images by your fellow artist in the Special Features #17 promotion discussion. Please visit and pass on the love to another artist.....L/F/Tw

Great work! Nominated for special feature in the 1000 Views Group

A great mood for a great image!

nice treatment of the scene

thank you Neale and Judith!

I love your treatment! l/f

Great work in black and white; love the texture!

One of my favorite places to visit! l/f

Congratulations on reaching 500+ views on this wonderful image, Joan! l/f

Congrats Joan on over 500 views!

Congratulations on reaching over 500 views!

Congratulations!! This stunning Black and White image has been selected to be featured for the week in the "Creative Black and White Fine Art Photographs" Group’s Home Page!! You are welcome to add a preview of this featured image to the group’s discussion post titled “2018 July: Stunning Group Featured Images and Thank-you’s” for a permanent display within the group, to share this achievement with others. If enabled, your image will also be posted to our group Google+ page. Thank you for your group participation! (July 23, 2018)