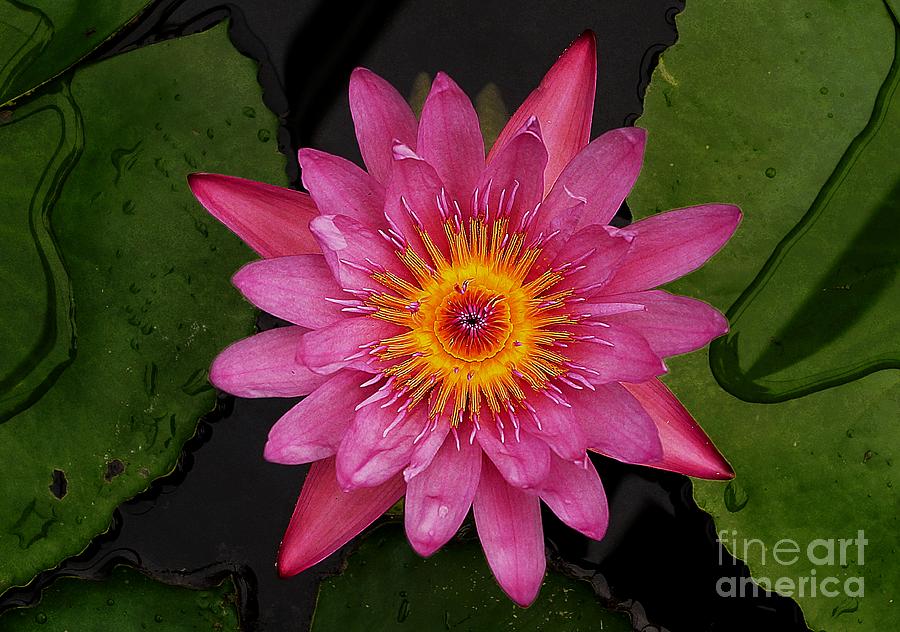 a picture i took of a water lily in a botanical garden in cuernavaca mexico...

Nymphaeaceae /ˌnɪmfiːˈeɪsiː/ is a family of flowering plants. Members of this family are commonly called water lilies and live as rhizomatous aquatic herbs in temperate and tropical climates around the world. The family contains eight large-flowered genera with about 70 species.[2] The genus Nymphaea contains about 35 species in the Northern Hemisphere.[2] The genus Victoria contains two species of giant water lilies endemic to South America.[2] Water lilies are rooted in soil in bodies of water, with leaves and flowers floating on the surface. The leaves are round, with a radial notch in Nymphaea and Nuphar, but fully circular in Victoria.

Water lilies are a well studied clade of plants because their large flowers with multiple unspecialized parts were initially considered to represent the floral pattern of the earliest flowering plants, and later genetic studies confirmed their evolutionary position as basal angiosperms. Analyses of floral morphology and molecular characteristics and comparisons with a sister taxon, the family Cabombaceae, indicate, however, that the flowers of extant water lilies with the most floral parts are more derived than the genera with fewer floral parts. Genera with more floral parts, Nuphar, Nymphaea, Victoria, have a beetle pollination syndrome, while genera with fewer parts are pollinated by flies or bees, or are self- or wind-pollinated.[3] Thus, the large number of relatively unspecialized floral organs in the Nymphaeaceae is not an ancestral condition for the clade.

This lovely piece of art work deserves many accolades, and I hope you get them on our WFS site, as they surely are worthy of high recognition. It is with pride and pleasure that I Feature this beautifully done piece of artwork on our Homepage. Thanks much for sharing your talents and the beauty of your great works. Liked & Faved Forever, Elvis

Thanks so very much, Randy!!

With nature's natural colour coordination, and the close-up view you have given, this makes a beautiful throw pillow.

Thank you very much Eston !!