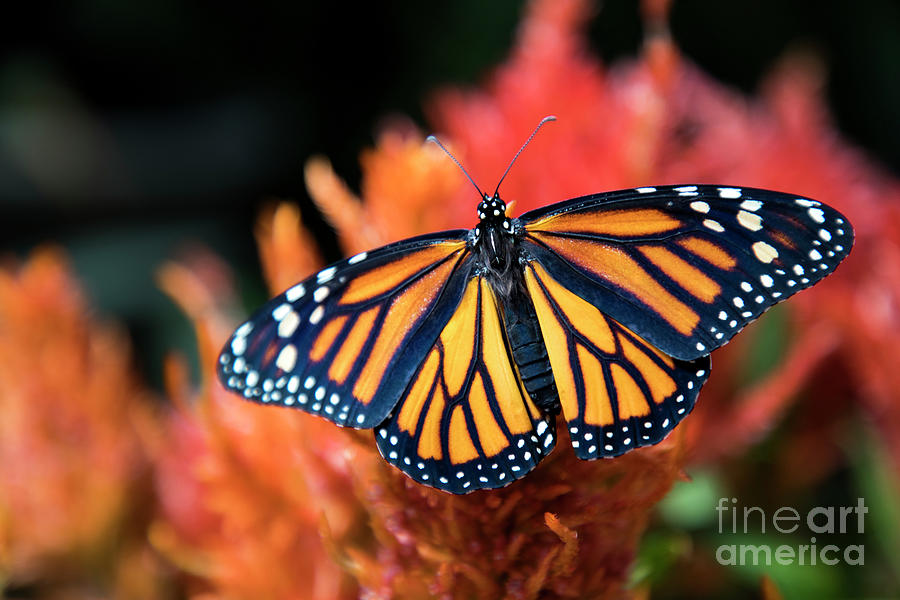 The monarch butterfly or simply monarch (Danaus plexippus) is a milkweed butterfly (subfamily Danainae) in the family Nymphalidae. Other common names depending on region include milkweed, common tiger, wanderer, and black veined brown. It may be the most familiar North American butterfly, and is considered an iconic pollinator species. Its wings feature an easily recognizable black, orange, and white pattern, with a wingspan of 8.9–10.2 cm ( 3 1⁄2–4 in). The viceroy butterfly is similar in color and pattern, but is markedly smaller and has an extra black stripe across each hindwing.

The eastern North American monarch population is notable for its annual southward late-summer/autumn migration from the northern and central United States and southern Canada to Florida and Mexico. During the fall migration, monarchs cover thousands of miles, with a corresponding multi-generational return north. The western North American population of monarchs west of the Rocky Mountains often migrates to sites in southern California but has been found in overwintering Mexican sites as well. Monarchs were transported to the International Space Station and were bred there.

In the U.S., the eastern population migrates both north and south on an annual basis. The population east of the Rocky Mountains migrates to the sanctuaries of the Mariposa Monarca Biosphere Reserve in Mexico and parts of Florida. The western population overwinters in various coastal sites in central and southern California. The overwintered population of those east of the Rockies may reach as far north as Texas and Oklahoma during the spring migration. The second, third and fourth generations return to their northern locations in the United States and Canada in the spring. Captive-raised monarchs appear capable of migrating to overwintering sites in Mexico, though they have a much lower migratory success rate than wild monarchs do. Recent discoveries have located monarch overwintering sites in Arizona.

FEATURED in the following groups:
~ Polish Photographers Platform
~ BUGs BUGs and more BUGs
~ Wildlife ONE A DAY
~ Fine Art America Professionals
~ USA Photographers ONLY
~ Images That Excite You
~ Out Of The Ordinary 1 a Day
~ Art District
~ Pure Nature Photography
~ Your Very Best Photography
~ ART – It Is Good For You

That bold orange and black background is perfect for this beauty. Well done.

Wow, Kasnia! What a beautiful capture of this Female Monarch! So well done!

Stunning capture of one of my favorite butterflies. Love its coloring!!

Thank you Dawn Currie for featuring my "Female Monarch Butterfly" in the group Pure Nature Photography!

Thank you Pamela Williams for featuring my "Female Monarch Butterfly" in the group Art District!

Thank you Lyric Lucas for featuring my "Female Monarch Butterfly" in the group Out Of The Ordinary 1 a Day!

So beautiful! Congratulations on your feature in Wildlife One A Day! FL

Kasia, this is gorgeous. f/l

Thank you Nader Rangidan for featuring my "Female Monarch Butterfly" in the group Images That Excite You!

Thank you Nader Rangidan for featuring my "Female Monarch Butterfly" in the group USA Photographers ONLY!

This is really gorgeous