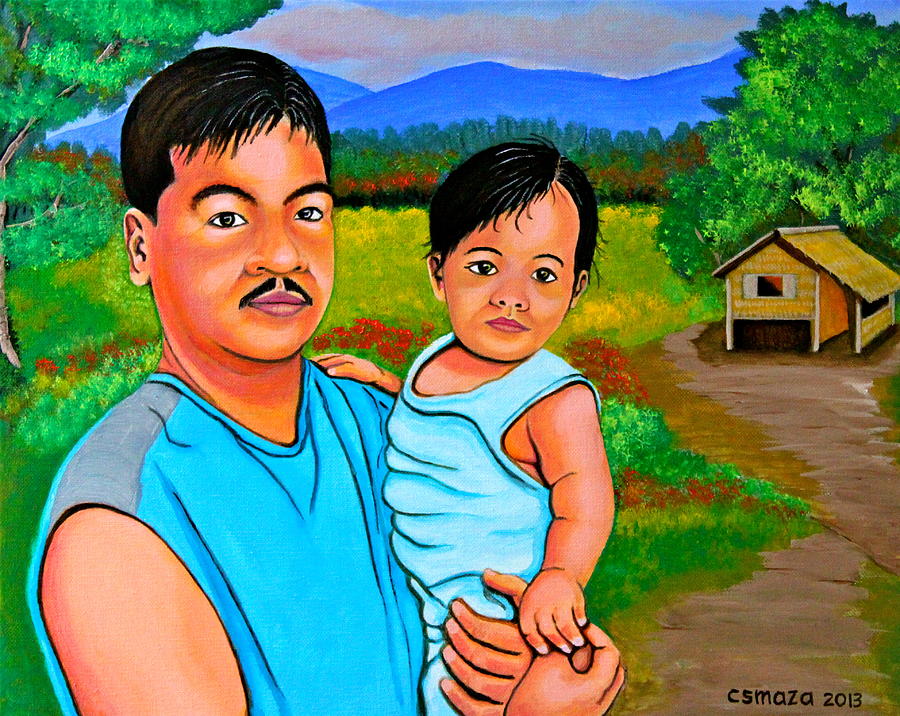 "Father and Son" is the third in my series of parent-and-child paintings. The first two paintings are "A Moment with Dad" and "Mom and Babe." This painting features a baby boy, instead of a baby girl, giving it a little bit of distinction from the other two.
.....
All three paintings were made in the first quarter of this year (January to March 2013), and were painted using acrylic paints on canvas. I finished this one on the 31st of March.
.....
The background of this painting depicts a countryside scene, which is typical of rural villages in the Philippines. There is a nipa hut in the background, as well as trees, mountains, shrubs, grasses, and tropical flowers. The father is shown carrying his son in his arms, apparently standing on an elevated portion of the land. A narrow pathway is shown on the side slope, leading down from where they are, towards the level ground below, where the nipa hut stands.
.....
This painting has/had been FEATURED in the following groups:
1.) Asian Artists: April 2013
2.) Naive Art: April 4, 2013
3.) Artists News: April 10, 2013
4.) Children Sector: April 30, 2013
5.) Memories and Nostalgia: June 26, 2013

Revisiting this fine double portrait with its wonderful colors and warmth of feeling, Cyril - liked!

Thanks, Michele, for your undying support. I really appreciate it.

Very handsome and sweet looking little boy who is so content to be held by his father! Love your composition and the subjects you chose to paint, which shows what you value, Cyril! Nicely done! Fave! L/F!

He does look so much like you, Cyril! V endearing and beautiful work! f/v

What a lovely father and son portrait, Cyril!!! L/F

Thanks for the compliment, Hazel.

Love your parent and child series, Cyril! A fine composition and rendering of the figures - liked!

I'm glad you like it, Michele. Thank you so much.

Lovely portrait, Cyril! A treasure for generations to come! L/F

Thank you, Cyril, for visiting my portfolio and for your kind comments. I admire your skill as an artist and the pride of a father for his son as you,ve captured here. - Mike (V)

Thanks to you, as well, Michael.

I assume this is a self portrait! Very nice painting as always! v

You are correct! Thanks, Elizabeth.

You are welcome, Gerald. Thanks also for visiting and commenting on my painting.

Bold work of Father and Son with lovely details.V/F

This is a beautiful work, both a self-portrait and the relationship with your son so beautifully shown here! Instant v/f

Great presentation of the very special and tender moment...v

Nice portraits. Clean and colorful, have a cheerful quality. (Is this a self-portrait?)

Oh, yes. This is a self-portrait.

I love this one, the colors and message are great

Voted. I love your style of painting! I like how you used shading to produce form in this Father and son. The composition is very pleading to my eyes. Wishing you the best is selling the original painting!

I love the care with which you represent families.

It's good to hear that. Thanks, Beverley.

Loooove it, ur profile pic compliments it sooo nicely....great self portrait...v

Thank you so much, Lovejoy.

Cyril that is a beautiful self portrait. A real treasure that i'm sure will be enjoyed by generations to come. v/f

Thank you, Peter. I really enjoyed working on this painting... This is something really special.

Another of your incredible and very unique paintings. v

Thank you so much, Mary.

Cyril, Priceless moment caught on canvas, excellent facial expressions and such vibrant colors on the individuals and in the background, excellent painting, fav, voted, google and tweet promoted and selected as my Pay It Forward in the group, Self Taught Artists

Thank you so much, John, for your very kind and encouraging comments. I really appreciate it.