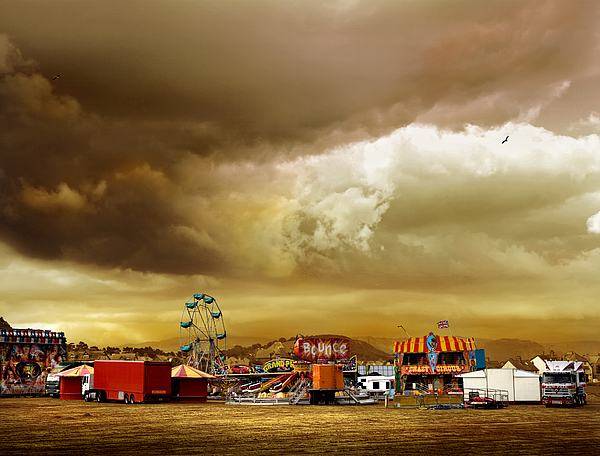 The funfair has its origins in pagan times and the word fair comes from the latin feria meaning a holiday. In the UK and most of Europe a fair is usually run by individual showmen who come together for the duration of an event. Descended from the medieval strollers and players of mainly Romani descent who have followed this way of life for generations, they have a distinct culture related to their trade and nomadic existence.
Fairs contain a mixture of attractions including children's rides, thrill rides and sideshows. The rollercoaster features fast moving carriages on tracks with steep drops, sharp curves and loops. Sideshows incorporated freak shows, wax works, boxing and wrestling and theatrical productions.
In the United Kingdom, many larger towns host travelling fairs at specific times of the year. Frequently the fairground is on an area of common land and has a history extending back to the Middle Ages.
North Wales has always been a popular region for fairs and amusement parks - firstly for the elusive nature of many of the locations, and secondly for the great sense of change that sweeps through the area reflecting broader social trends such as the decline of the British holiday and the associated demise of the sea-side park.
Colwyn Bay had the 'Happy Hour' park run by J.P. Collins as part of the larger Collins group. The location of the park was by the railway line and the old A55 road. Colwyn Bay's park continued in the 1980s under the ownership of Arthur Barnard, who took over in 1962, however the park was taken over for the new A55 expressway development.
Bucking the downward trend has been the very popular Victorian Extravaganza held during May Day Bank Holiday in neighboring Llandudno which brings together a vast array of rides, shows and other fairground paraphernalia.
This photo captures a small funfair being assembled for the Llandudno Wonderland Carnival on a particularly unsettled summer's day in 2010.

What Russell said. SO nostalgic and filled with emotion. I feel like I've been catapulted back to childhood. What a wonderful image!

Its like something out of a Ray Bradbury book or the Land of OZ...Incredible!

FANTASTIC. Love your colour pallet and your composition. No rule of 3 here, just circus and sky.

surreal but eye catching. nice off beat composition. You have a knack for using your software in post very creativly. Peace, Sven

An awesome image with a wonderfully surreal feel to it.

Hi Mal! This is a great photo- amazing sky.

The details in this are absolutely amazing.... It has such a nostalgic feel to it that I was immediately transported back to my childhood.... Stunning. FAVOURITE.

I second what Allen said and then add the bird way up there just kind of adds a special touch. Fabulous work Mal!!!