Eye To Eye With Big Woody 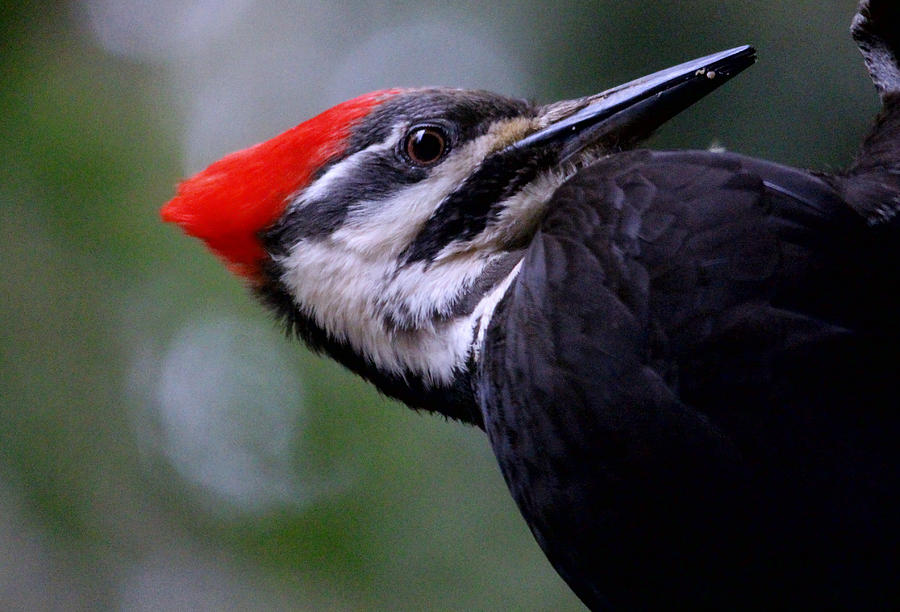 Eye To Eye With Big Woody

I came face to face with this somewhat young Pileated Woodpecker this morning! I wasn't paying much attention and there we were. Eye to eye, gazing into each others eyes. This is a fairly young Pileated Woodpecker. He startled me, I scared him, but for a minute, we were friends.
Here's a little information about the "big feller" if you want to know about him.
The Pileated Woodpecker is one of the biggest, most striking forest birds on the continent. It’s nearly the size of a crow, black with bold white stripes down the neck and a flaming-red crest. Look (and listen) for Pileated Woodpeckers whacking at dead trees and fallen logs in search of their main prey, carpenter ants, leaving unique rectangular holes in the wood. The nest holes these birds make offer crucial shelter to many species including swifts, owls, ducks, bats, and pine martens.
Size & Shape The Pileated Woodpecker is a very large woodpecker with a long neck and a triangular crest that sweeps off the back of the head. The bill is long and chisel-like, about the length of the head. In flight, the wings are broad and the bird can seem crow like. Color Pattern Pileated Woodpeckers are mostly black with white stripes on the face and neck and a flaming-red crest. Males have a red stripe on the cheek. In flight, the bird reveals extensive white under wings and small white crescents on the upper side, at the bases of the primaries.
Behavior
Pileated Woodpeckers drill distinctive rectangular-shaped holes in rotten wood to get at carpenter ants and other insects. They are loud birds with whinnying calls. They also drum on dead trees in a deep, slow, rolling pattern, and even the heavy chopping sound of foraging carries well. Their flight undulates like other woodpeckers, which helps separate them from a crow’s straight flight path. Habitat Pileated Woodpeckers are forest birds that require large, standing dead trees and downed wood. Forests can be evergreen, deciduous, or mixed and are often old, particularly in the West. In the East they live in young forests as well and may even be seen in partially wooded suburbs and backyards.
Pileated Woodpeckers are such large, striking birds that they’re hard to confuse with other species. They are most similar to the Ivory-billed Woodpecker, which is now extremely rare or extinct and was only ever known from swamps of the Southeast. For information on how to distinguish the two species, visit our Ivory-bill site. The Red-headed Woodpecker is smaller with a shorter neck, an entirely red head, and large white patches on the trailing edge of the wing. At distance, in flight, American Crows flap steadily instead of with the impulsive, bounding motion of a Pileated Woodpecker. Crows show no white in the wing.

Kym, great close up of a Pileated Woodpecker, nice work.

Promoted in Don Columbus's group, A Birding Group - Wings. Such a great capture.

Cutie.....clean and wonderful. I am astonished by your inmense luck...being able to share space with such wonderful creatures. Delicious....I live in an urban shore....and that means that apart from pigeons, sparrows, cats and dogs, and another kind of birds, the fauna here is not so variagated and wild. Your photos are tremendous!!!. Love them....you can capt the inner, soul expression of each creature, with such a expression in them that is touching. Rosa

Kym, great capture, nice sharp image! I still want to know if the raccoons live in your house?

This is an amazing bird. Wonderful shot, Kym.

Congratulations Kym, your work is Featured in "Clear BIRD Photography"! Easy to see why this work has been so popular it has the look of "What are you doing here?" Great Clarity, Details, Focus goes immediately to its eyes and Red head. Great Work!!

Kym: I wouldn't get ANY CLOSER! to this beautiful woodpecker...Here in St. Louis outskirts we have several types: downy, hairy, red bellied and redheaded (big ones!) but have only seen a pileated way out in JIllinois and Springfield, Mo. from a friend....Birds are such perfect subjects for art and photoshoots...Keep shooting I love your work!LF

Perfect capture, an award winning photo! Congratulations on all the features!

Wow Kym this is such a beautiful photo!!! L/F

This is a gorgeous capture! Love your description, also. I miss seeing them up close as I once often did a few years back. l/f

An excellent close up, so exciting to see these huge woodpeckers! LF

I love woodpeckers!! This is a beautiful shot, Kym!

Great capture of this lovely Woodpecker!

What a gorgeous handsome bird! L

You're not only a great photographer you are a fantastic writer. Your descriptions are the very best!

Excellent capture. We must live in the same part of the world, because we have all the same critters as those you capture so well:)

Wonderful timing and great close up.