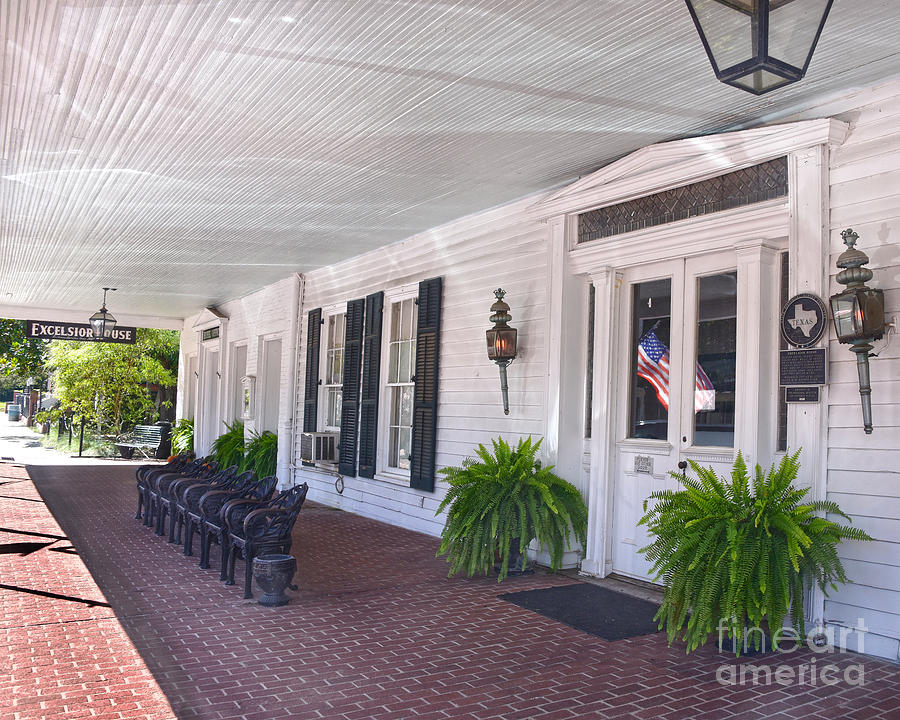 Wrought iron chairs provide a cool, restful spot in the shade at the entrance of the Excelsior House in historic Jefferson, Texas. The Excelsior was built in the 1850s and has been in continuous operation ever since, making it the oldest hotel in East Texas according to the National Register of Historic Places.

Among the famous guests of the hotel were Ulysses S. Grant, Rutherford B. Hayes, Jay Gould, and Lady Bird Johnson. Oscar Wilde was also a guest there when he was in Jefferson to recite poetry at the opera house.


One of the many American flags flying in front of the hotel is reflected in the glass window of the front door.

The Excelsior is noted as a site of some hauntings.

According to Haunted History, a page of Facebook: "The story most people want to hear is about Steven Spielberg, who stayed in the hotel in the early 70’s before he made it big. On a Monday night, after scouting locations, the crew stayed at the hotel. Spielberg really didn’t want to spend the night, he thought it was an old, musty hotel and wanted to go into Marshall and stay somewhere new. Everyone else was tired and cranky so he gave in.
“They gave him number 215, known as the Jay Gould room…It’s supposed to be the most active room…sometimes you can feel somebody come sit on the bed and touch you,” said Breck.

She said they keep a journal in the room for people to document their stay. “It’s interesting to go back and read what other people have experienced in the room.”

“The story with Spielberg is, he threw his briefcase in the rocking chair and it threw it back at him.” He said he felt uneasy all night; felt someone was behind him and following him everywhere he went. He had a hard time sleeping, “but he finally managed to go to sleep. Sometime after midnight he woke up. There was a little boy asking him if he was ready for breakfast. He said, ‘We’re outta here!’ He got everybody up in the middle of the night, they left and they got a room in Marshall.”

Breck said for years and years she didn’t know if it was true or just one of those “stories,” because she couldn’t find his name in the register.

“Now there are two ways we know in fact, this story is true. There was a story written in the Dallas Morning News not long after the incident occurred that you can still look up online and read. There was an interview many years ago on an entertainment show; and they were asking about some of the movies he made with poltergeist being one of them. They asked him if he had ever been in a haunted house. He said he hadn’t been in a haunted house, ‘but I’ve been in two haunted hotels.’ He talked about the Stanley Hotel in Colorado and the Excelsior here in Jefferson and told them pretty much the same story that I just told ya’ll.”

Excelsior Hotel is on the National Register of Historic Places, is a Recorded Texas Historic Landmark and part of Jefferson Historic District.

Thank you very much, Morris!