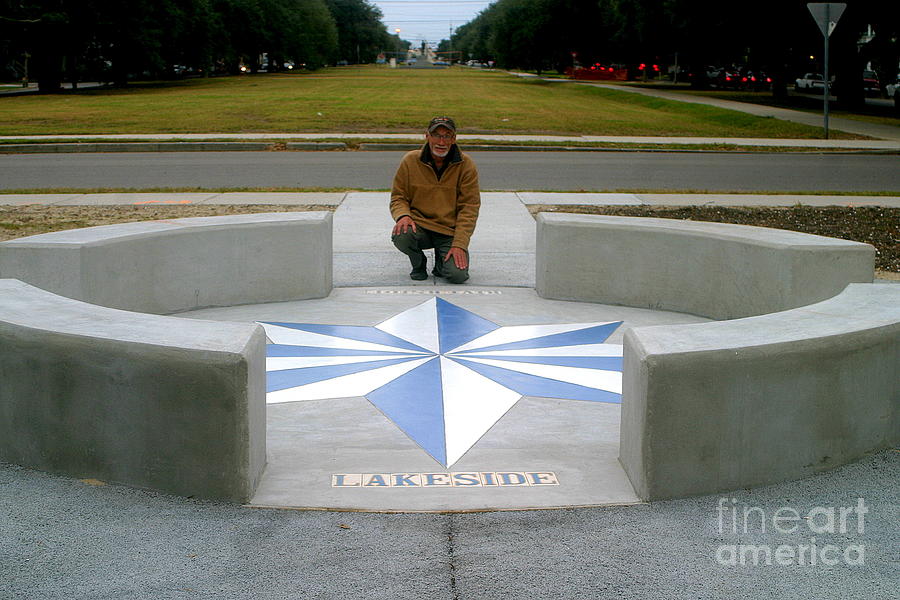 "Equity Circle" a public meeting place to make new friends or renew old friendships and resolved any indifferences in the middle of the neutral ground in MidCity which is consider the heart of New Orleans. The center circumference is 30 ft wide. The structure was built at the oppside end of the neutral ground where the once controversal bronze mounment of Jefferson Davis along with the city council voting and renaming of Jefferson Davis Parkway to now to the African-American educator whose vision transformed Xavier University, the New Orleans City to Norman C. Francis Parkway

All participants received the prestigious Mayor of New Orleans Mitch Landieu The City of New Orleans Community Excellence Award a 3 1/2 wide bronze metal presented to members at a Gala held at The World War II Museum. Equity Circle project concept and deisgn by Michael Joseph Hoard. The central focus compass rose design is inlaid with brass. Each entrace and main points of the compass rose points to Lakeside, Riverside, Upriver and Downriver inlaid cermic tiles as seen on street names on corners all throughout New Orleans, LA. The smaller compass rose points to true north, south, east and west. The design and project was awarded $50,000.00 for its construction by the Kellogg Foundation and Winter Institute.
The deisng was unamiously voted by the other 29 group members. The project was built under budget, the remainder $5,000.00 was used for a 3 night public movie presentation on Race and Reconcilation at Tulane University, with a question and answer by distinguished Speakers and Directors of the selected films.

All which remains are the tree planting outside the 6ft circular pathway behind each bench quadrant. On Saturday December the marble commemorative marker was installed on the inside bench wall on the right side of the photo.

Sunday December 11, 2016 will be the official city wide ribbon ceremony. I was selected by fellow members to perform and dedicated the song "Deep River" to all those enslaved past and future.

Greetings Tonya, thank you so much for viewing Equity Circle Portrait it pleases me this photo appeals to you and I appreciate very much the generous comment, it has truly been a great experience from concept and design to reality.....cheers from Nawlins and Happy Holidays

Greetings Jenny thank you for viewing Equity Circle Portrait, it pleases me this photo appeals to you and I appreciate the generous wonderful. Its been an amazing larger than life project. Cheers from Nawlins and Happy Holidays!!!