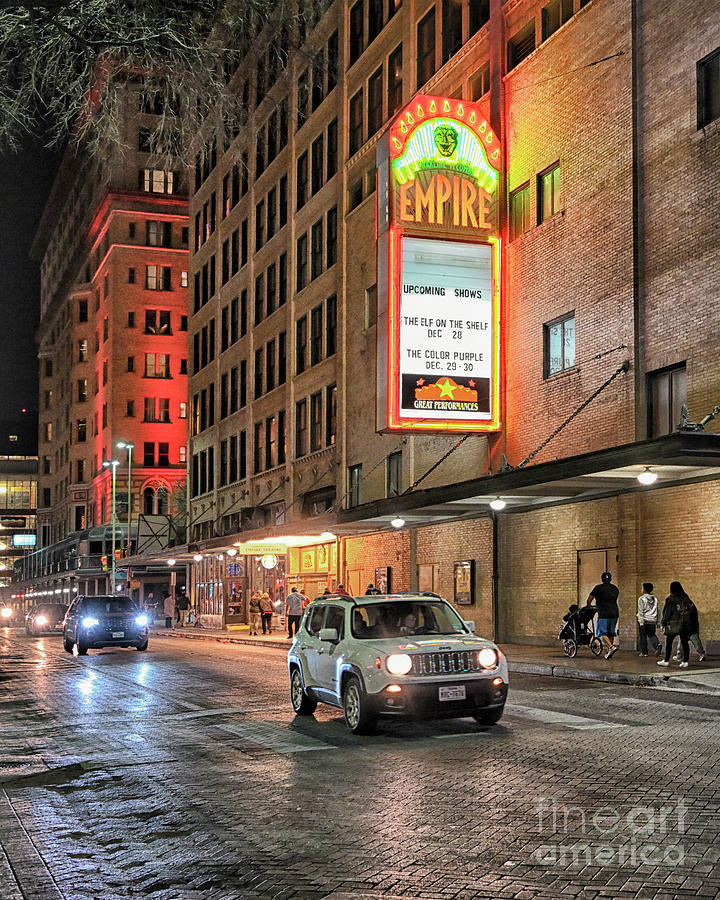 Since the 1870’s, the land on which the present Empire Theatre sits on has been occupied by a theatre, first the Turner Opera House, later called Riche’s Opera, the Houston Street Theatre, the Alhambra Theatre, and finally the Empire Opera House.
Thomas Brady acquired the Empire Theatre in 1890 and remodeled it for legitimate “wholesome” theatre, as it remained until 1913, when Brady built a new Empire Theatre on the site, inside an office tower later named the Brady Building. The Empire Theatre opened on December 14, 1914.
Designed by the firm of Mauran, Russell & Crowe of Saint Louis, the theater was designed as a European-style opera house, and was acclaimed as the first modern theater of San Antonio, and the city’s largest at the time. It boasted electric lighting, fans, and motorized stage equipment, as the Empire not only staged legitimate fare, but vaudeville, stage revues, and motion picture screenings.
The Empire Theatre’s interior was plush and elegant, with gilding covering nearly every piece of plasterwork in the theater. The ornate plaster took the shape of goddesses, floral designs and medallions, covered with not just gold gilt, but various types of metallic leaf, including various bronze and copper shades.
The auditorium itself takes up four floors of the Brady Building, contains two balconies, side boxes, a soaring proscenium arch, trimmed in gilded, highly intricate plaster, with a large stage area. The Empire’s auditorium was (and still is) noted for its superb acoustics.
Outside, over the marquee, a copper sculpted eagle, in full flight, highlighted the facade. Later, a large vertical marquee, four stories tall, was added to the corner of the Brady Building, overlooking St. Mary’s Street.
During the Empire’s golden age, the 1920’s, many of Hollywood’s biggest stars made personal appearances there to promote their new films, including Charlie Chaplin and Lon Chaney. Even during the Depression years, which caused many movie houses to lose business or even shut down, the Empire Theatre boomed, including one week when well over 15,000 people packed the theater for Mae West’s “Belle of the ‘90s”. Among the last major celebrities to appear on the Empire’s stage were Gene Autry and Roy Rogers (including his horse Trigger) to throngs of enthusiastic fans.
Tragedy struck the Empire Theatre in 1921 when during a flood, more than nine feet of water filled the theater, destroying large sections of plasterwork, and causing heavy damage to the rest of the theater. However, the owners of the Empire Theatre at the time opted not to bother restoring the original paint color schemes and gilding, and after cleaning up, painted all of the auditorium completely white.
After many years of falling into decline, including years of screening adult features, the Empire Theatre was shuttered in 1978. A decade later, the city of San Antonio bought the decrepit theater and, with support from the Las Casas Foundation, funds were raised to restore the Empire Theatre to its original appearance.
The original autumnal color scheme was restored, as were pounds of gold leaf on repaired plasterwork. The proscenium arch, its gilded plaster goddesses and flora now shimmering under warm lighting, frames the enlarged stage area.
Even the copper eagle, removed decades ago from the front of the Empire’s facade, has been restored to its perch, discovered hidden in a ladies' room during the renovation.

Photograph made with an infrared converted Nikon Z7.

Congratulations! Your fantastic photographic art has been chosen as a Camera Art Group feature! You are invited to archive your work in the feature archives discussion in the Camera Art Group

Congratulations - Your beautiful artwork has been featured in the "Travel Art" gallery! For further promotion, you can post it to the specific Travel Destinations galleries, our Facebook group and our Pinterest board - all the links are provided on our group's homepage: https://fineartamerica.com/groups/1-travel-art.html * * Want to be on our group's blog: travelartpix.com? Check the group's homepage for details!

Richard ... thank you so much for the comment and support of the Texas winter vacation Travel image, "Empire Theater San Antonio".

Congratulations Norman, your work is Featured in "Photographic Camera Art" I invite you to place it in the group's "2020 Featured Image Archive" Discussion!! L/Tweet!

Don ... thank you so very much for the feature and support of the Texas Travel Night image, "Empire Theater San Antonio", in the Fine Art America group, "Photographic Camera Art".

John ... Thanks for featuring the Texas Travel Night image, "Empire Theater San Antonio", in the Fine Art America group, "Images That Excite You!"

Nice, I like the bright tone of the colored lights

Micah ... thanks for the visit and comment on the Texas Travel photog, "Empire Theater San Antonio".

Catchavista ... thank you for the splendid comment on the Texas Travel photograph, "Empire Theater San Antonio".