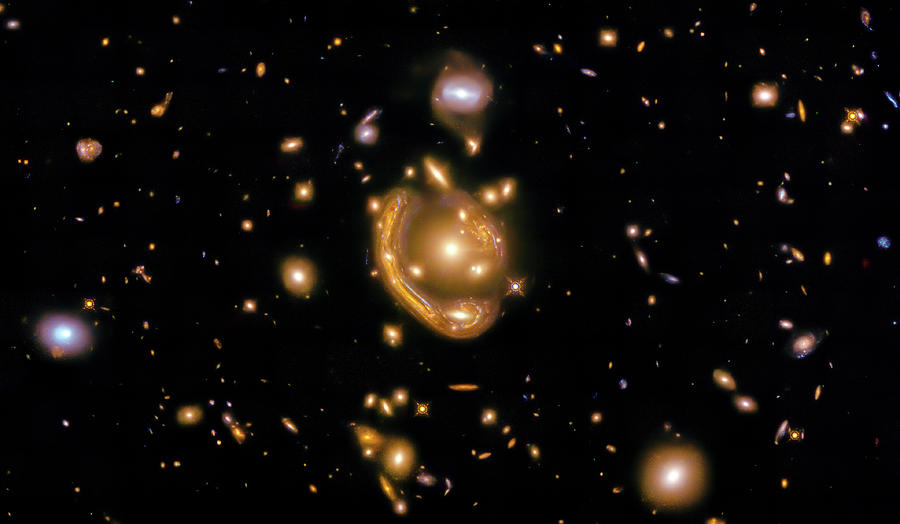 The narrow galaxy elegantly curving around its spherical companion in this image is a fantastic example of a truly strange and very rare phenomenon. This image, taken with the NASA/ESA Hubble Space Telescope, depicts GAL-CLUS-022058s, located in the southern hemisphere constellation of Fornax (The Furnace). GAL-CLUS-022058s is the largest and one of the most complete Einstein rings ever discovered in our Universe. The object has been nicknamed by the Principal Investigator and his team who are studying this Einstein ring as the "Molten Ring", which alludes to its appearance and host constellation.

First theorised to exist by Einstein in his general theory of relativity, this object’s unusual shape can be explained by a process called gravitational lensing, which causes light shining from far away to be bent and pulled by the gravity of an object between its source and the observer. In this case, the light from the background galaxy has been distorted into the curve we see by the gravity of the galaxy cluster sitting in front of it. The near exact alignment of the background galaxy with the central elliptical galaxy of the cluster, seen in the middle of this image, has warped and magnified the image of the background galaxy around itself into an almost perfect ring. The gravity from other galaxies in the cluster is soon to cause additional distortions.

Objects like these are the ideal laboratory in which to research galaxies too faint and distant to otherwise see.

Wow. This is incredible. vlf