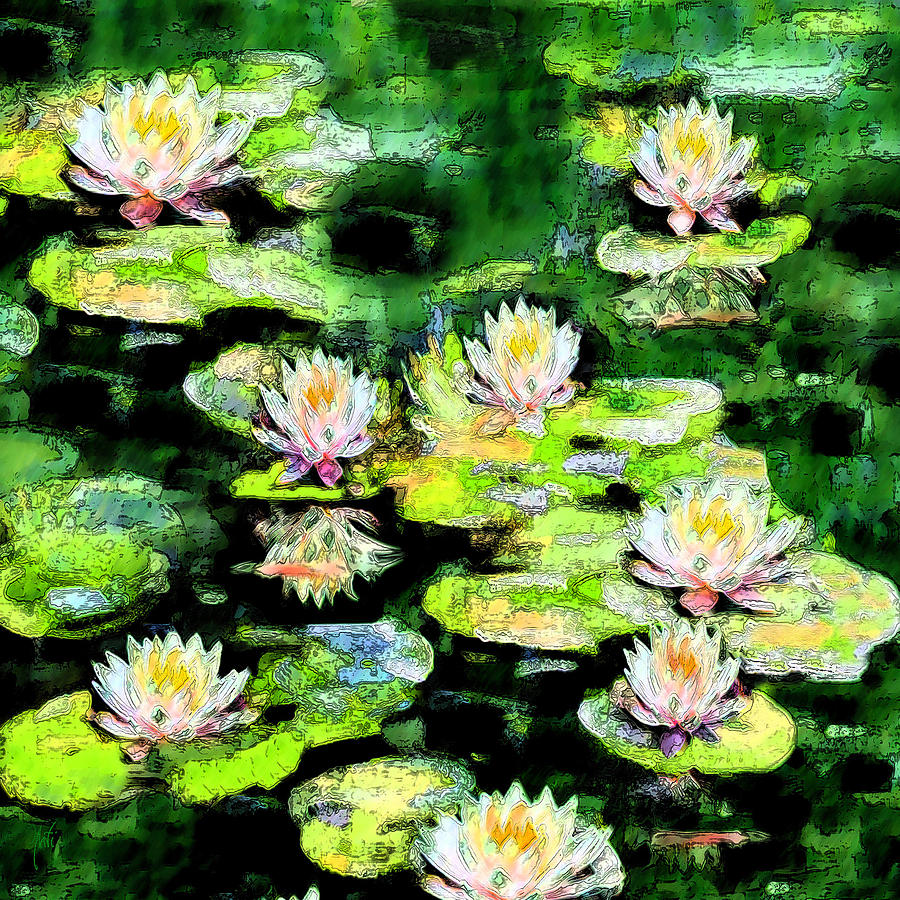 This is a completely digitally painted piece. This piece is available in much larger sizes and can be customized for your color scheme. Email any request you have, as an artist I have done commissioned pieces for individuals and corporations. A full wall of these beauties would be great in any spa or retreat.

Waterlilies
Nymphaeaceae /ˌnɪmfiːˈeɪsiː/ is a family of flowering plants. Members of this family are commonly called water lilies and live as rhizomatous aquatic herbs in temperate and tropical climates around the world. The family contains eight large-flowered genera with about 70 species.[2] The genus Nymphaea contains about 35 species in the Northern Hemisphere.[2] The genus Victoria contains two species of giant water lilies endemic to South America.[2] Water lilies are rooted in soil in bodies of water, with leaves and flowers floating on the surface. The leaves are round, with a radial notch in Nymphaea and Nuphar, but fully circular in Victoria.

Water lilies are a well studied clade of plants because their large flowers with multiple unspecialized parts were initially considered to represent the floral pattern of the earliest flowering plants, and later genetic studies confirmed their evolutionary position as basal angiosperms. Analyses of floral morphology and molecular characteristics and comparisons with a sister taxon, the family Cabombaceae, indicate, however, that the flowers of extant water lilies with the most floral parts are more derived than the genera with fewer floral parts. Genera with more floral parts, Nuphar, Nymphaea, Victoria, have a beetle pollination syndrome, while genera with fewer parts are pollinated by flies or bees, or are self- or wind-pollinated.[3] Thus, the large number of relatively unspecialized floral organs in the Nymphaeaceae is not an ancestral condition for the clade.
Horticulturally water lilies have been hybridized for temperate gardens since the nineteenth century, and the hybrids are divided into three groups: hardy, night-blooming tropical, and day-blooming tropical water lilies. Hardy water lilies are hybrids from the subgenus Castalia; night-blooming tropical water lilies are developed from the subgenus Lotos (L.) Carl Ludwig WilldenowWilld.; and the day-blooming tropical plants arise from hybridization of plants of the Brachyceras Casp. subgenus.

Wonderful color harmonies- your lilies sparkle and glow in a marvelous way!

Thank you, Suzanne.. wish you could see this in person!

Wow, this is fantastic!

I am so glad you are visiting! We each have so many images, it is a gift to take the time to look into them. TY!

This is just gorgeous, Michele! So enchanting and serene, I would visit it every day. =)

Thats good that your camera did not get wet..Might have been a little costly..

Well, like every photographer who would be in my position the camera was held high above my head..lol..because it is one of my most precious possessions. Back then it was filled with film too and I would have lost all of that.

Beautiful.. makes me feel like i am at the pond taking pictures..

Thank you, Rebecca..I once fell in a pond taking pictures at the botanical gardens..lol.. the only thing that did not get wet was my camera.. lol..

Michele, such a peaceful image. I love the texture too, invoking mystery hidden within. l/v

Stunning jewels floating as if waiting to to be plucked by your hand. Absolutely love these vibrant tones,Michele.

Thank you, Karen.. would love to sit by this pond and have a little picnic with you!

Thanks, Janice, I just love lilypads and lotus blossoms..

Thank you, Kae...I am learning my way around here..hope to get a lot more of my work up.

Lovely work And welcome to FAA!

Thanks, Carla...I love waterlilies..must do more have a painting going even now with them...