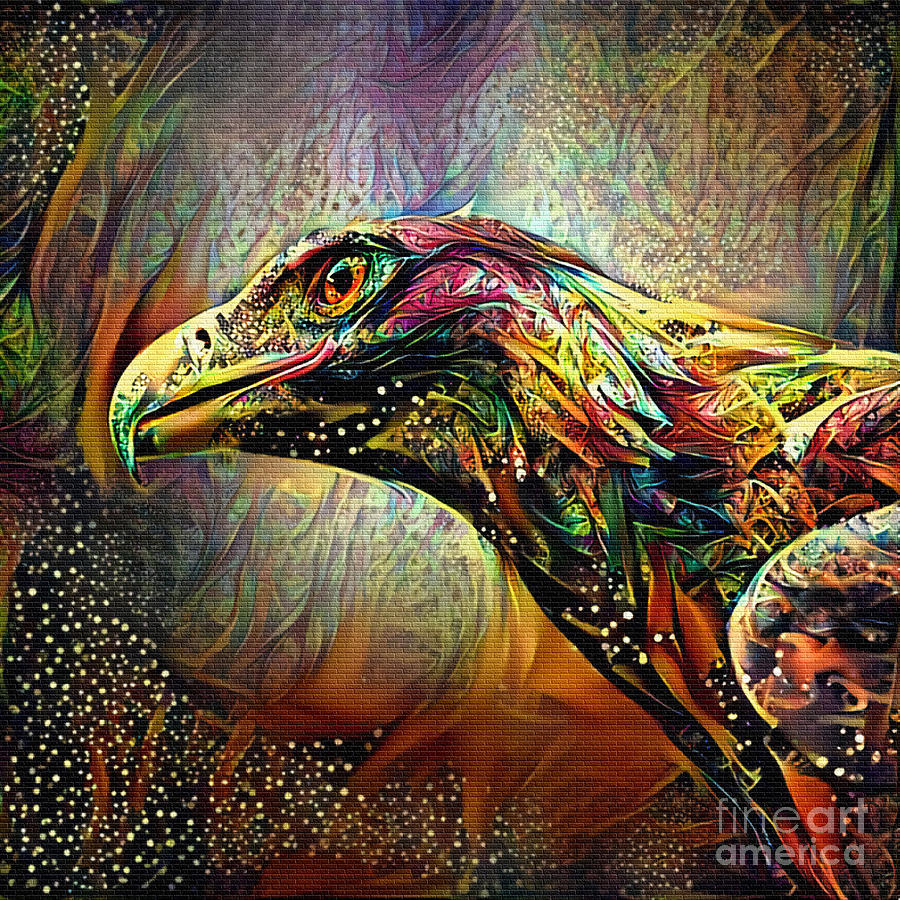 Digital art rendition of my photograph Wedge-tailed Eagle Portrait. A bright and colorful digital art version with a fantasy jungle background and a textured brick overlay.

A Wedge-tailed Eagle, Aquila audax, captured at Port Macquarie, NSW, Australia.
One of the four largest Eagles in the world. Wide-ranging, singly or in pairs; feeds on small mammals, birds and carrion. Nests in large trees.

[From Wikipedia]
The wedge-tailed eagle (Aquila audax), sometimes known as the eaglehawk (both misnomers, as it is not a hawk, and its tail is shaped more like a diamond), is the largest bird of prey in Australia, and is also found in southern New Guinea. It has long, fairly broad wings, fully feathered legs and an unmistakable diamond-shaped tail. Because of both its tail and its size it is one of the largest birds of prey in the world - it can be identified at a glance as a "Wedgie" even by the non-expert.

Sorry for the mispell of your name Arlane :)

Thanks Arlene for your kind comment. I sent a couple of L/F's your way.

Beautiful work (and it makes a great puzzle!)

Thanks so very much Michael for the feature and also 'Photo of the Day' selection in your group - The Great Puzzle Designs Group :) It was a pleasure to browse more of your wonderful new images and I left numerous L/F's in appreciation.

Many thanks Gary for your comment and vote :) Much appreciated. I sent a few L/F's your way as a thank you.

Spectacular artwork! Voted in the What Is Art contest

Thanks for your kind comment Dorothy :) I enjoyed browsing some of your new artworks and I left a few L/F's as a thank you.

Thanks very much Jurgen :) Loved viewing your lovely new images and I left a few L/F's in appreciation.

Thanks again Debra for your comment and feature, and thanks Gary also. I browsed both of your new artworks and left a few L/F's in appreciation.

Congratulations this wonderful art has been featured on the Home Page of the group "TATONG". L/F/T Kaye, I simply love your art, how very beautiful... Thank you for the joy much needed by all. GREAT ART! Blessings, Debra

Thanks Kay for your comment and congratulations. Loved browsing some of your new images and I left a few L/F's as a thank you.

Many thanks Debra for your congratulations and for hosting the contest. I loved viewing some of your new artworks and I left a few L/F's and a tweet in appreciation.

Congratulations on your 2d place win in the Bird and Leaf contest! l/f

Congratulations on your 2nd place win in The Bird and Leaf Abst. Contest Kaye. I love your work. You are excellent.. L/F/T

Thank's Deborah for your comment and vote. I enjoyed browsing your new artworks and left a few L/F's in appreciation.

This is stunning. L/F and voted.

Thank you Lisa :) It was a pleasure to browse your new paintings and I left a couple of L/F's as a thank you.

Thanks very much Rainbow Artist :) Loved viewing your amazing art and I left a few L/F's as a thank you.

Wow how strikingly gorgeous this creation is Kaye!! i love the fabulous colours and design. a superb visual effect and outcome!! L/F

Thanks so much Maria for your comment and viewing my work :)

Thank you Jeff :) It was a pleasure viewing your new images and I left a couple of L/F's as a thank you.