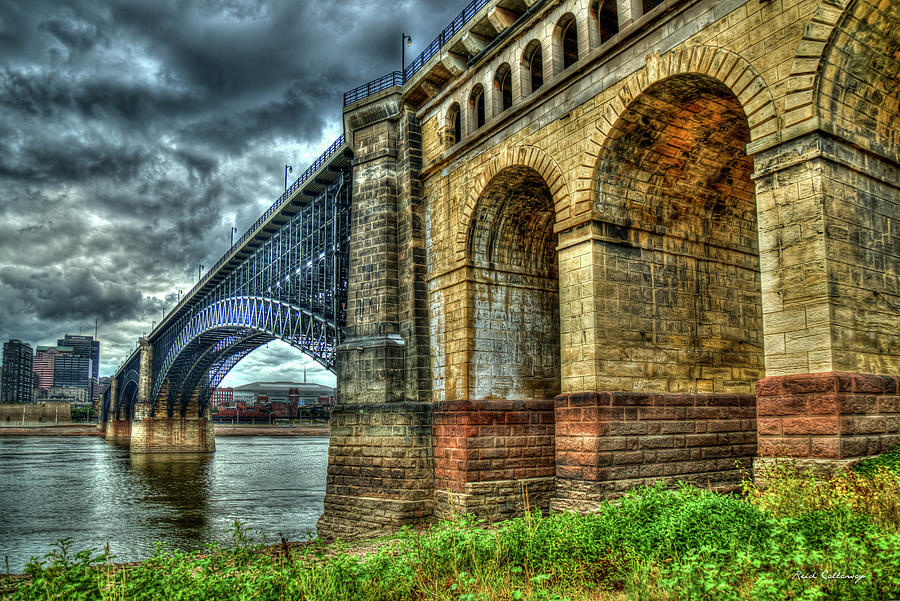 The Eads Bridge is a steel combined road and railway bridge over the Mississippi River connecting the cities of St. Louis, Missouri and East St. Louis, Illinois. Envisioned and financed by a young Andrew Carnegie. Opened in 1874, it was one of the earliest long bridges built across the Mississippi, the world's first all steel construction, and built high enough so steamboats could travel underneath. As such, the St. Louis Landmark is listed on the National Register of Historic Places as a National Historic Landmark. As of April 2014, it carries about 8,100 vehicles daily, down 3,000 since the new Stan Musial Veterans Memorial Bridge opened in February 2014.

The bridge is named for its designer and builder, James B. Eads. When completed in 1874, the Eads Bridge was the longest arch bridge in the world, with an overall length of 6,442 feet (1,964 m). The ribbed steel arch spans were considered daring, as was the use of steel as a primary structural material. This was the first such use of true steel in a major bridge. The cost of building the bridge was nearly $10 million ($210 million with inflation).

The Eads Bridge was also the first bridge to be built using cantilever support methods exclusively, and one of the first to make use of pneumatic caissons. The Eads Bridge caissons, still among the deepest ever sunk, were responsible for one of the first major outbreaks of "caisson disease" (also known as "the bends" or decompression sickness). Fifteen workers died, two other workers were permanently disabled, and 77 were severely afflicted.

On June 14, 1874, John Robinson led a "test elephant" on a stroll across the new Eads Bridge to prove that it was safe. A big crowd cheered as the elephant from a traveling circus lumbered towards Illinois. It was believed that elephants had instincts that would keep them from setting foot on unsafe structures. Two weeks later, Eads sent 14 locomotives back and forth across the bridge at one time. The opening day celebration on July 4, 1874, featured a parade that stretched for 15 miles (24 km) through the streets of St. Louis.

The Eads Bridge, which became an iconic image of the city of St. Louis, from the time of its erection until 1965 when the Gateway Arch was constructed, is still in use. The bridge crosses the St. Louis riverfront between Laclede's Landing, to the north, and the grounds of the Gateway Arch, to the south. Today the road deck has been restored, allowing vehicular and pedestrian traffic to cross the river. The St. Louis MetroLink light rail system has used the rail deck since 1993.

Comments, Likes and Favorites are appreciated... ☺

Reid, Congratulations on your Sale!!...L

Thank you Romuald Henry Wasielewski for featuring my artwork in our group... Arts Fantastic World! 1/16/2019

Thank you Joseph C Hinson Photography for featuring my artwork in our group... North American Trains and Rails and Stations! 2/13/2018

Thank you Pamela Williams for featuring my artwork in our group.... Art District! 11/9/2017