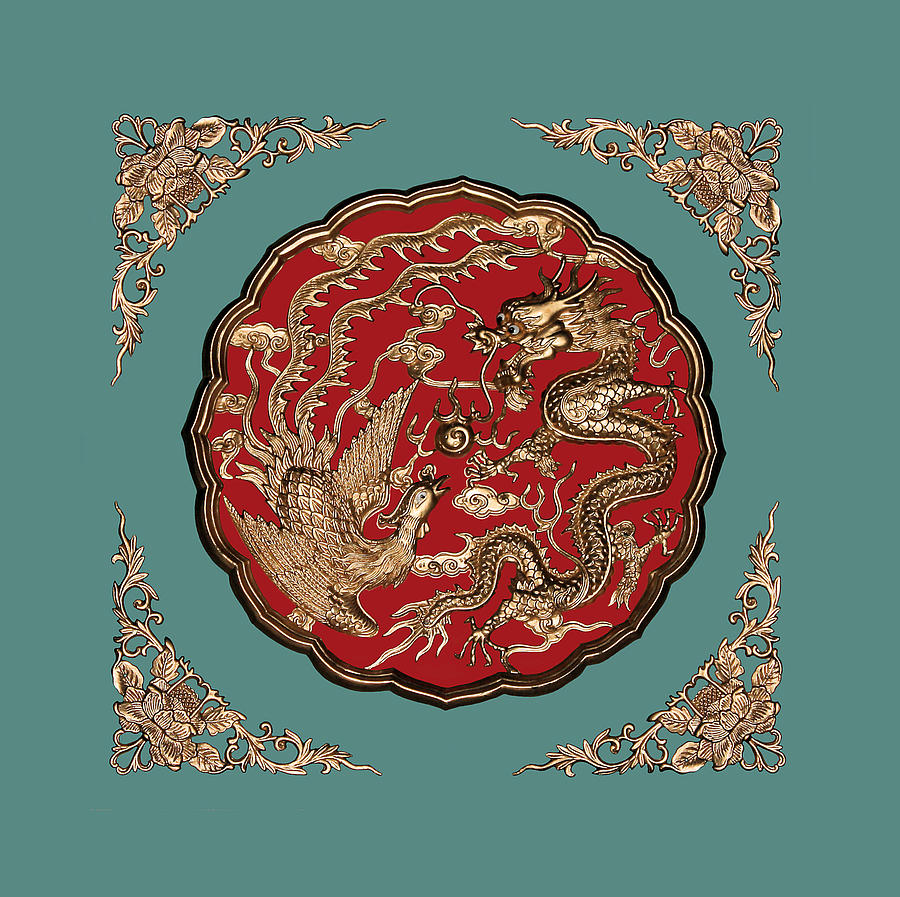 In China, the dragon and the phoenix are traditional animals symbolic of auspiciousness. Along with the lin and the tortoise, they were known as the "Four Supernatural Spirits." According to ancient records, the dragon appeared in a magical variety of forms. It could be long or short, small or gigantic. It could be both secretive yet active, and it also inhabited everywhere from the heights to the depths. Traveling between the skies and earth, dragons were considered the mounts of heavenly deities. They also had the power to control rain.During times of drought, dragons could bestow precious water, and in times of flood, they could stop the rain and clear the skies.

The dragon and the phoenix, in addition to serving as auspicious symbols, were often metaphors in ancient China for the gentleman and the sage. For example, Confucius reportedly compared Lao-tzu to a dragon; both reserved yet elusive spirits capable of freely transcending the boundaries of heaven and earth. Lao-tzu is also said to have compared the wisdom and grace of Confucius to the lofty virtues associated with the phoenix; both took benevolence as the ultimate virtue in treating others. Consequently, we know from ancient texts and artifacts that the dragon and the phoenix were auspicious animals as early as the Neolithic age in China. Highly revered and appreciated, images of dragons and phoenixes found their way onto ceremonial jade ornaments and were carved, painted, or sewn onto objects of everyday use--representing reverence for the spirits and desire for auspicious fortune. This custom was passed down through the ages. From references of dragons and phoenixes in local festivals and rites to the heights of literature and fine art, they all reveal the glory of these legendary animals.

Ever since the Ch'in dynasty (221-206 B.C.), when the First Emperor of China proclaimed himself descendant of the dragon, almost every ruler was referred to as "The True Dragon, Son of Heaven." The dragon thereby became a symbol of the ruler, while the phoenix became an embodiment of his mate. The forms of the dragon and phoenix were transformed gradually into images associated with the court, representing imperial nobility and authority. Almost everything related to the court, from the decoration of palace architecture down to the insignia on everyday objects and clothing--even covers and cases for books--were adorned with images and patterns bearing imperial dragons and phoenixes. These appear in a variety of materials, ranging anywhere from jade to paper. Even in the same medium, they take on different appearances, such as the case with paintings in monochrome ink or color. Of every imaginable type and pose, dragons and phoenixes not only serve as decoration, but also seem to come alive, making them "true" treasures of ancient Chinese arts and crafts.

I love the green and red contrast which make the gold pop out even more! Really lovely!

Congrats on your sale, Kristin! :)

congrats on the sale

Congrats on the sale :-)

Thanks, Krys, Lucia and Owlspook (what a great avatar name!). :)

So beautiful as always.

congrats on your recent sale! (smile)

Marvelous work! Congrats on your sale!

Thanks, Sandi and Dorothy. :)

Congrats on your sale, Kristin!!

Congrats on your sale, Kristin!!

Thanks, Odon, Xueling, Brandon and Karma. :)

congrats on your sale

Congratulations on your sale, Kristin! What a gorgeous capture!

Thanks, Matthias, Marcia, Sumit and Bill. :)

Congratulations on your sale!!

Great work, congrats on your sale!

Thanks, Nickolas. Yes, it took me several days to get it completed. It was worth the effort as it has sold three times now. :)