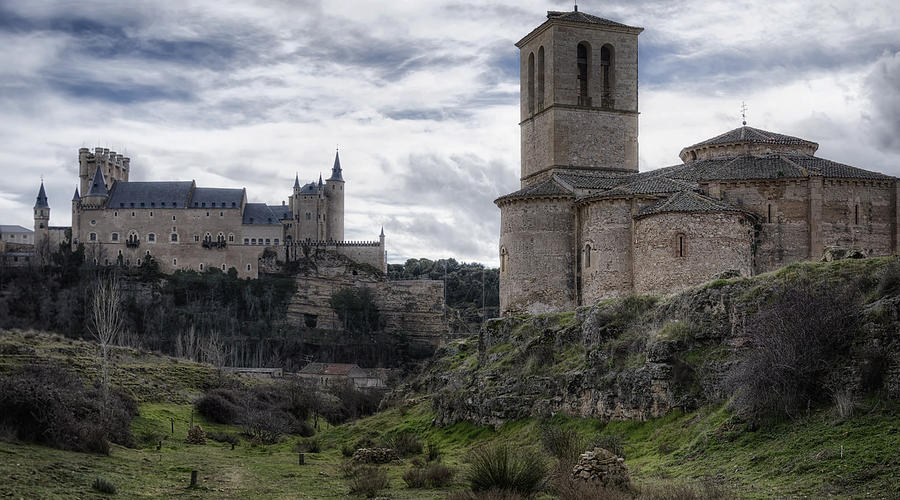 I had read about the unique architecture of the Church of the Holy Cross in Segovia, build in 1208. So, loving a good walk, I walked 45 min from my B&B to see it. Of course, it was closed until between 2 and 4 pm, and I had arrived at 3 pm. Lucky me! That meant I had an hour to kill looking all around the area looking for good vantage points and shooting hundred of photos. The light changed several times during that hour from totally overcast to a bit of blue so I was lucky to be forced to be there to wait it out! I think I was very lucky to be delayed! The Church of the Holy Cross (Vera Cruz) is on the right foreground. An unusual Romanesque church. Its floorplan is a 12-sided polygon. It has 3 chapels with tympanums and 2 portals with archivolts on columns. The church is inspired on the Holy Sepulchre in Jerusalem, the origin of the Templar Order. The Alcazar is on the left in the distance. It is a stone fortification rising out of a rocky crag above the confluence of the Eresma and Clamores rivers. It is one of the most distinctive castle-palaces in Spain by virtue of its shape - like the bow of a ship. The Alcazar was originally built as a fortress but has served as a royal palace, a state prison, a Royal Artillery College and a military academy.The castle is said to be one of the inspirations for Walt Disney's Cinderella Castle.

Marvelous - I've been to Segovia, but never got here!

Beautiful POV, very interesting place, must have been a lovely walk!

thank you Caroline! a lovely walk and a wonderful place to be delayed!

Such a beautiful capture! L/F/twt

Wow, this is beautiful. L/G+

This is very nice! Types of photos that fairy tales are made of!!

Beautiful image Joan as always your work is so wonderful. L/F/P

thank you so much Lesa!

Fantastic capture of these historic buildings the landscape surrounding them. The dramatic sky is the perfect backdrop. vf fav g+ tweet