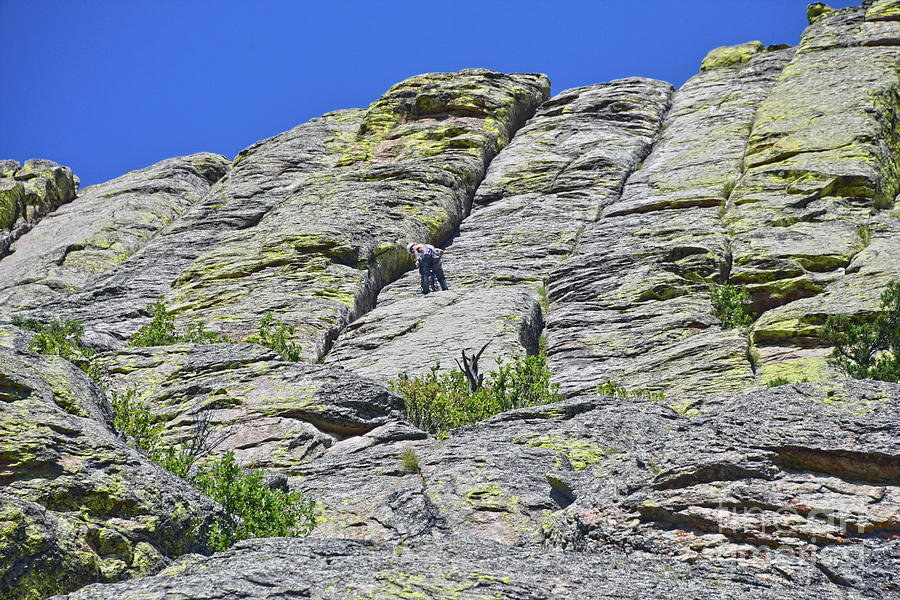 A climber nears the summit of Devils Tower National Monument in Wyoming.

He was one of the ten people I saw climbing Devils Tower National Monument, Wyoming, when I walked the trail around the base on August 27, 2019. Four climbers are seen in this photograph. It made me dizzy just to look at them!

Since 1893, people have been climbing the Devils Tower National Monument since 1893, when two local ranchers climbed the tower using a 350-foot stake ladder pounded into a crack. That ladder is still visible today, sitting 200 feet above the Tower Trail.

Today, climbers use specialized gear such as spring-loaded cams, ropes and rubberized shoes. Hundreds of parallel cracks divide Devils Tower into large hexagonal columns, making it one of the finest traditional crack climbing areas in North America. The longest of these continuous cracks are almost 400 feet long and vary significantly in width.

All climbers must register for a free climbing permit before climbing, and immediately after climbing each day. Registration is used for climber safety and also becomes part of a historical database that has been maintained since 1937. Registration also provides documentation of the Tower as a climbing resource.

Some routes are annually closed in order to protect nesting Prairie Falcons. Routes are frequently closed between March and July.

American Indians have been drawn to the tower for upwards of 10,000 years, and consider it a sacred place. It is recommended that climbers don't climb in June, a time when many Native American perform ceremonies at the tower. The Lakota Sioux call the Tower Mato Tipila (Bear Lodge).

Historically, many tribes of the Great Plains and Black Hills regions had connections with the area around Devils Tower. Today there are over two dozen tribes associated with the Tower site. Common peoples of the region include: Arapaho, Crow, Cheyenne, Shoshone and Lakota.
Devils Tower (also known as Bear Lodge Butte) is a butte, possibly laccolithic, composed of igneous rock in the Bear Lodge Ranger District of the Black Hills, near Hulett and Sundance in Crook County, northeastern Wyoming, above the Belle Fourche River. It rises 1,267 feet (386 m) above the Belle Fourche River, standing 867 feet (265 m) from summit to base. The summit is 5,112 feet (1,559 m) above sea level.

The igneous material that forms the Tower is a phonolite porphyry intruded about 40.5 million years ago, a light to dark-gray or greenish-gray igneous rock with conspicuous crystals of white feldspar. As the magma cooled, hexagonal (and sometimes 4-, 5-, and 7-sided) columns formed, each about six feet in diameter. As the rock continued to cool, the vertical columns shrank in width and cracks began to occur at 120-degree angles, generally forming compact 6-sided columns.

Thank you very much, Aurelio!