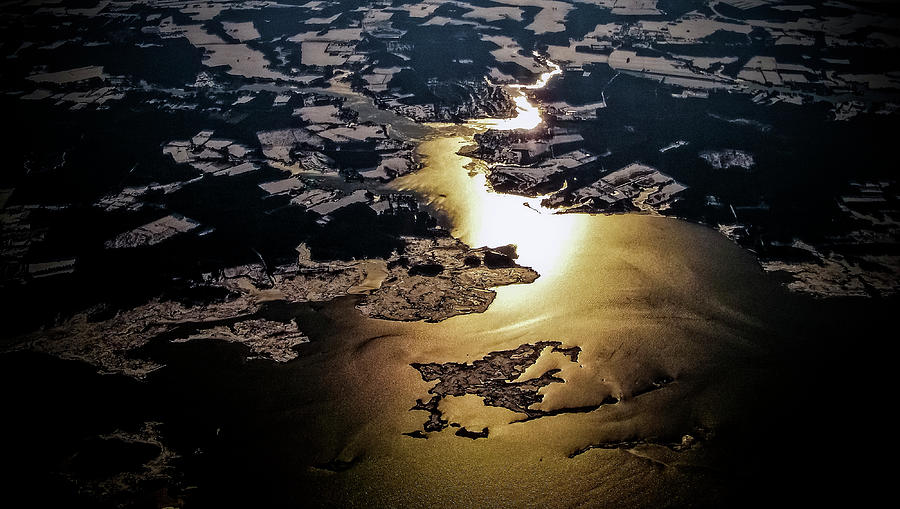 The Delmarva Peninsula, or simply Delmarva, is a large peninsula on the East Coast of the United States, occupied by Delaware and parts of the Eastern Shores of Maryland and Virginia. The peninsula is 170 miles (274 km) long. In width, it ranges from 70 miles (113 km) near its center, to 12 miles (19 km) at the isthmus on its northern edge, to less near its southern tip of Cape Charles. It is bordered by the Chesapeake Bay on the west, the Delaware River, Delaware Bay, and the Atlantic Ocean on the east, and the Elk River and its isthmus on the north.

The toponym Delmarva is a clipped compound of Delaware, Maryland, and Virginia (abbreviated VA), which in turn was modeled after Delmar, a border town named after two of those states. While Delmar was founded and named in 1859, the earliest uses of the name Delmarva occurred several decades later and appear to have been commercial; for example, the Delmarva Heat, Light, and Refrigerating Corp. of Chincoteague, Virginia, was in existence by 1913[1]—but general use of the term did not occur until the 1920s.[2]

Dover, Delaware's capital city, is the peninsula's largest city by population, but the main commercial area is Salisbury, Maryland, near its center. Including all offshore islands (the largest of which is Kent Island in Maryland), the total land area south of the Chesapeake and Delaware Canal is 5,454 sq mi (14,130 km2). At the 2000 census the total population was 681,030, giving an average population density of 124.86 inhabitants per square mile (48.21/km2).

Cape Charles forms the southern tip of the peninsula in Virginia.

The entire Delmarva Peninsula falls within the Atlantic Coastal Plain, a flat and sandy area with very few or no hills; the highest point in the peninsula is only 102 ft (31 m) above sea level.[3] The fall line, found in the region southwest of Wilmington, Delaware, and just north of the northern edge of the Delmarva Peninsula, is a geographic borderland where the Piedmont region transitions into the coastal plain. Its Atlantic Ocean coast is formed by the Virginia Barrier Islands in the south and the Fenwick Island barrier spit in the north.

The culture on Delmarva is starkly different from the rest of the Mid-Atlantic region and is much like that of the Southern United States. Many Delmarva counties are much more conservative than the "mainland" counties of Delaware, Maryland, and Virginia.[4]

Delmarva is driven by agriculture and commercial fishing.[5] Most of the land is rural, and there are only a few large population centers.

Many dialect studies show that Delmarva residents have a variation of Southern American English which is particularly prevalent in rural areas.[6]

-was formed nearly 12,000 years ago when glaciers melted and flooded the Susquehanna River valley;

-has an average depth of 21 feet (the deepest part of the Bay, a.k.a. "The Hole," is 174 feet deep and located off of Bloody Point, southeast of
Annapolis, Maryland;

-is fed by 50 major tributaries (or streams and rivers) every day—the largest of these are the Susquehanna, Potomac, Rappahannock, York, and James;

-produces more than 500 millions pounds of seafood harvest each year.

Great use of light!

Thank you Carol for the fav and wonderful comment!! :)

SUPERB! ALMOST ABSTRACT. AT FIRST I THOUGHT IT WAS A CLOSE UP WATER REFLECTING FROM THE GROUND, LIKE IN A STREET OR SOMETHING...

I appreciate your wonderful comment Camilla, indeed many where the amazing sights I was privileged to see over the years from my front office!!

This is a beautiful capture. Looks like a river of flowing gold. FV

Thank you Rolando for the FV and your great comment!!

Thanks Phil for your nice comment and the l/f!!

Thank you very much Cia for your wonderful comment and fav!!

Thank you Carol for your 'Fabulous' comment and fav!! :)

Thanks John for your fav and the feature in the Fine Art America Group "Images That Excite You!"