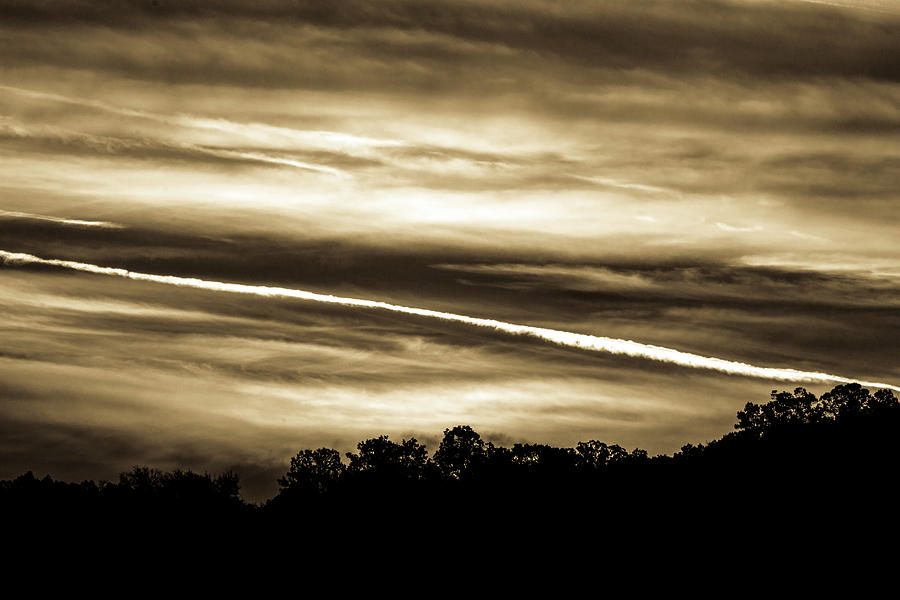 Silhouettes and shadows appear in the pre-dawn light in the Davis Mountains of west Texas. A possible airplane contrail illuminates bright white against the dramatic sky. The sky illuminates as on a brilliant artist's pallet. So dawns a new day.

The Davis Mountains host a wide variety of flora and fauna. Located near Fort Davis, Marfa, McDonald Observatory, and the Hobby Eberly Telescope there is much to see and do in the area.

"As one travels west on I-10 or I-20, out of the vast desert, on the horizon, slowly rises the purple mass of the Davis Mountains, the largest mountain chain entirely within Texas. Elevations range from 3,500 to 8,000 feet as they rise above the Chihuahuan desert. The mild climate and volcanic soils support a most biologically diverse selection of mountain flora and fauna.

The mountains receive more rain than the surrounding Trans-Pecos area and therefore have vegetation not found in the desert lowlands, such as piÂ¤on pine, black cherry, alligator juniper, live and dwarf gray oak, yellow and limber pine and the unusual and rare Madrone tree. The fall colors truly rival the best of northern and eastern states."

https://www.weather.gov/fgz/CloudsContrails
"A contrail is the condensation trail that is left behind by a passing jet plane. Contrails form when hot humid air from jet exhaust mixes with environmental air of low vapor pressure and low temperature. Vapor pressure is just a fancy term for the amount of pressure that is exerted by water vapor itself (as opposed to atmImage of contrails across the sky.ospheric, or barometric, pressure which is due to the weight of the entire atmosphere above you). The mixing occurs directly behind the plane due to the turbulence generated by the engine. If condensation (conversion from a gas to a liquid) occurs, then a contrail becomes visible. Since air temperatures at these high atmospheric levels are very cold (generally colder than -40 F), only a small amount of liquid is necessary for condensation to occur. Water is a normal byproduct of combustion in engines.

This cloud formation is very similar to the process that occurs when you breath on a cold winter day and you can see your own breath in the form of a "cloud". You may have noticed that on some days this "cloud" you produce lasts longer than on other days where it quickly disappears. The length of time that a contrail lasts is directly proportional to the amount of humidity that is already in the atmosphere. A drier atmosphere leads to a more short-lived contrail, while an atmosphere that has more humidity will lead to longer-lived contrails. However, if the atmosphere is too dry, no contrails will form. Occasionally a jet plane, especially if ascending or descending, will pass through a much drier or more moist layer of atmosphere which may result in a broken pattern to the contrail, with it appearing in segments rather than in one continuous plume."

so beautiful in sepia