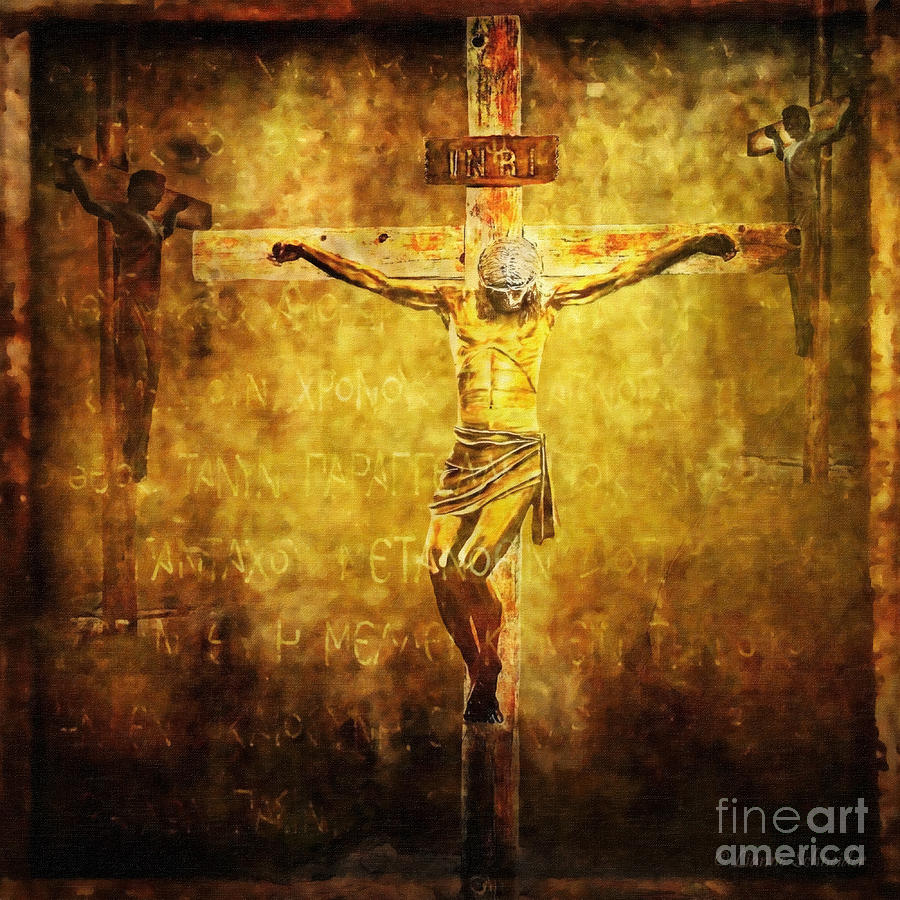 The twelfth in a series of 14 images -

These images - 14 in all - are in fulfillment of a commission of 40x40 prints of the series that represent the 14 Stations of the Cross or Via Dolorosa (Way of Sorrows). The stations are vignettes of Jesus Christ's walk to Cavalry and his Crucifixion. Similar images in plaster, bronze, pewter, painted on wood panels or sculpted can be found in Christian churches throughout the world and in many communities, people from all denominations participate in "Living Stations" or "Passion plays" based on these same moments.

Congratulations, on 3rd Place Win, in JESUS -THE SON OF GOD, contest!

So powerful but heartbreaking. Your Art is so inspiring Ken Mucke

Congratulations on your sale from the bottom of my heart!

Lianne -- Superb!! CONGRATULATIONS!! Your beautiful artwork has been Featured by the - CATHOLIC ART GALLERY - Fine Art Group on Pixels.com, a Fine Art America Company! Thank you for sharing it !! Keeping you in prayer always! Your beautiful life and Art makes a positive and lasting impression in this world.

Mitch, Jaroslaw, Victor and Sharon - as soon as I'm able after my bone marrow surgery I will be by your pages to thank you in person. Please know that I cherish your lovely comments. Thank you.

Nice work! Congratulations on your sale.

wonderful piece had to come back for another look ...truly sensational in all ways beautifully realised and rendered love it fl

Moving and beautiful!!! I found your bio. so interesting, as well! L

Thank you so much PJ - I appreciate that very much

My most sincere thanks to ShitlaPrasad, Frank and Geordie for featuring this art work in their phenomenal groups - 1-2-3-4-5, CATHOLIC ART GALLERY and CHRISTIAN THEME ARTWORK GROUP. I'm deeply honored.

Lainne this whole series is so beautiful and full of meaning..each one is a masterpiece in its own right. I am sure the buyer was wonderfully pleased with your work. I love these pieces!! v/f/t/g+

Thank you so much Frank - I'm reworking several of this series that I wasn't quite happy with but I'm so glad you can feel this one speak to you.

Thank you all for your lovely words of congratulations - I'm very touched by that outpouring of support. And I want to thank as well the groups and hosts listed in the description to the right for recently featuring this work. I am more honored than I can say.

Thanks so much to the buyer but also to each of you for helping me to celebrate and for your good wishes. That means more to me than I can tell you!

Congrats on your sale Lianne. What a fantastic work. Well deserved sale my friend.

Congrats on your sale, Lianne!

It would be impossible for me to express to each of you my deep gratitude for your comments and votes on this work. It's a difficult piece, so your affirmation of my work means more than I can say...it's a true gift. I hope I have been able to return that gift in kind by visiting your work as well - if I haven't yet, I will soon.

Marie I am so deeply touched and honored by your feature of this image from the Via Dolorosa series. What an affirmation to be featured in CHRISTIAN ART AND PHOTOGRAPHY.

My sincere apology Tina that I did not acknowledge your feature of this image in ARTISTS BEST FIVE. I cannot tell you how meaningful that is. Thank you.

This whole series is wonderfully creative and engaging. Love the complexity while maintaining cohesiveness across the entire image. Great layering and textures.

I just revisited this beautiful series. There are certain pieces that bring tears to my eyes. As a body of work, this is powerful and quite magnificent! Your treatment is perfection, Lianne! You must have such a feeling of accomplishment after completing such a project! Well done!! V/F!

What an incredibly lovely thing to say Terry. It was extremely challenging but at the same time, enormously fulfilling to complete this series of 14 images. Perhaps I see this work more than others as a legacy of sorts - at least I hope that it is an offering worth leaving behind. Thank you so much for your lovely comment, f and v.

"Father forgive them for they do not know what they do' Lianne, Your Via Dolorosa is an outstanding achievement and must have been a very deeply touching experience for you to make, based on sensing my own deep emotions. It is an awesome work of art, perfect in visualization, My respect for the deep spirit of humanity you bring to this oeuvre.

I'm overcome with emotion Greta - yes, this was a challenging and yet inspiring series for me. I was so deeply moved by the original sculptures and yet, I thought plain photographs of them did not do them justice nor tell the story in the same way as fine art. I'm incredibly touched by your comment Greta and I thank you from my heart.

Tina - I am just incredibly honored by the feature in your group ARTISTS BEST FIVE. It's such an amazing honor. Thank you.

This series of images are simply stunning Lianne, congratulations on their success xx

Love, love, love it! Amazing work! I like that you shot the other two crosses as well! v/f