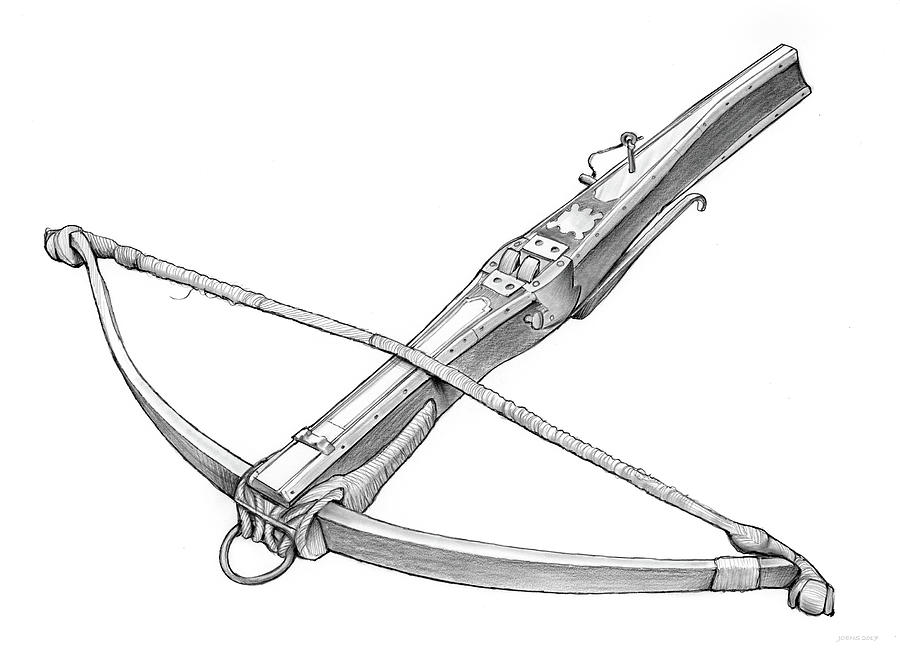 A crossbow is a type of elastic ranged weapon in similar principle to a bow, consisting of a bow-like assembly mounted horizontally on a main frame called a tiller, which is handheld in a similar fashion to the stock of a long gun. It shoots arrow-like projectiles called bolts or quarrels. The medieval European crossbow was called by many other names, most of which were derived from the word ballista, an ancient Greek torsion siege engine similar in appearance.

Although having the same launch principle, crossbows differs to bows in that the a bow's draw must be maintained manually by the archer pulling the bowstring with fingers, arm and back muscles and holding that same form in order to aim (which demands significant physical strength and stamina), while a crossbow uses a locking mechanism to maintain the draw, limiting the shooter's exertion to only pulling the string into lock and then release the shot via depressing a lever/trigger. This not only enables a crossbowman to handle stronger draw weight, but also hold for longer with significant less physical strain, thus capable of better precision.

Historically, crossbows played a significant role in the warfare of East Asia and Medieval Europe.[2] The earliest crossbows in the world were invented in ancient China and caused a major shift in the role of projectile weaponry. The traditional bow and arrow had long been a specialized weapon that required considerable training, physical strength and expertise to operate with any degree of practical efficiency. In many cultures, archers were considered a separate and superior warrior caste, despite usually being drawn from the common class, as their archery skill-set was essentially trained and strengthened from birth (similar to many horseman cultures) and was impossible to reproduce outside a pre-established cultural tradition, which many nations lacked. In contrast, the crossbow was the first ranged weapon to be simple, cheap and physically undemanding enough to be operated by large numbers of untrained conscript soldiers, thus enabling virtually any nation to field a potent force of crossbowmen with little expense beyond the cost of the weapons themselves.[3]

In modern times, crossbows, like bows, have been largely supplanted by the more powerful and accurate firearms in most weapon roles, but are still widely used for competitive shooting sports, hunting and scenarios when shooting with relative silence is important.