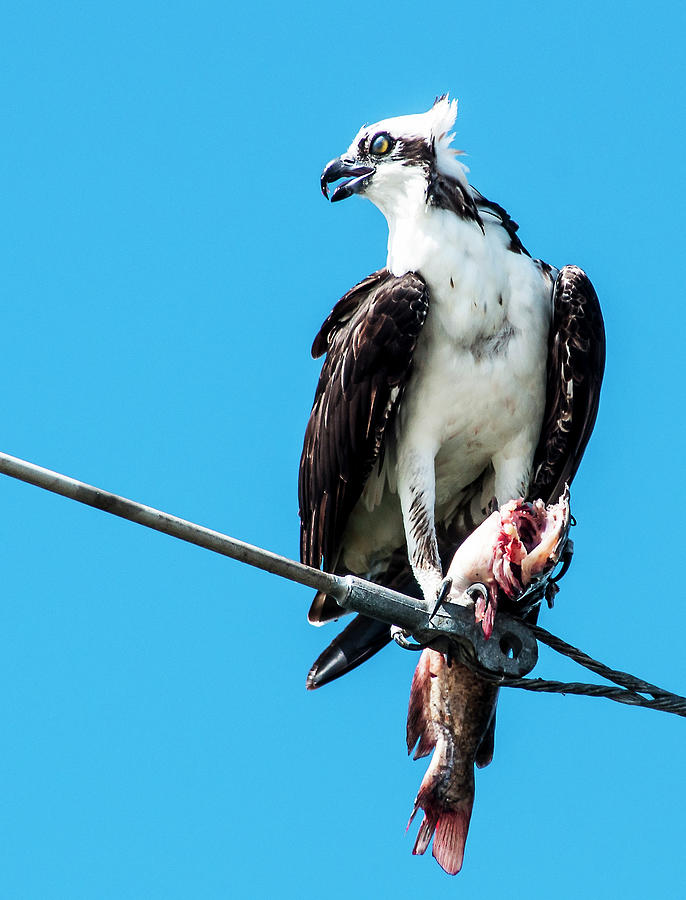 An osprey rests on a wire feeds on a catfish on the Lake Apopka North Shore Wildlife Drive in Orange County, Florida.

Ospreys (pandion haliaetus) can be found around the world where there is a body of freshwater or saltwater with a concentration of fish near the surface. Since they can only dive three feet down in the water, they prefer shallow water or water where fish tend to school at the surface. Also known as the fish hawk or sea hawk, the osprey ranges in the Americas from Alaska and northern Canada all the way down to northern Argentina in South America, migrating long distances during cold weather to reach warmer climates.​

Ospreys, like owls, are the only raptors with a reversible outer toe that allows them to grip prey with two toes forward and two backward. The osprey also has barbed pads on the soles of its feet that help them hold onto slippery fish and other prey. They measure from 21.3" to 22.8" in length with a wingspan between 59.1" and 70.9." Unlike other hawks, they have closeable nostrils that allow them to dive underwater.

I'm really glad you like it Beatriz. Thank you very much for the feature in the group "FLORIDA - ART OF THE SUNSHINE STATE.."