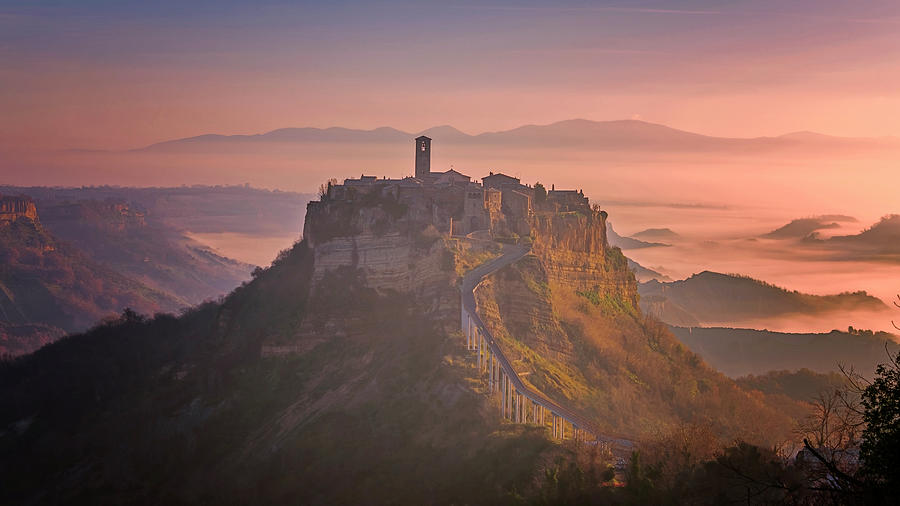 I woke up in Orvieto Italy the morning of a planned trip to Civita di Bagnoregio to find thick fog enveloping the town. I worried that the fog might ruin what I had understood to be amazing views of the medieval hilltop town. However, what I found was the most amazing misty and magical and fairy tale view of this town, with fog enveloping the valleys while the hill town stood tall in the sunrise. Nevertheless, I found Civita di Bagnoregio to be a complicated place. On the one hand, it is an ancient place, founded by the Etruscans more than 2500 years ago. But the town began to decline by the end of the 17th century as a major earthquake occurred to accelerate the erosion that eats away at the edges of the town. The bridge that connected Civita to Bagnoregio was bombed during World War II and a new bridge had to be built. A series of landslides in 2014 and 2015 saw some other medieval properties plummet into the valleys. Civita di Bagnoregio became known as The Dying Town, with a permanent population of only 10. But a fee of 3 euro to enter the town has helped in fund preservation efforts and has succeeded in abolishing communal taxes and abolishing unemployment in Bagnoregio. However, a town that exists only as a small tourist haven is a rather bizarre concept. It is almost Disney-like, and not in a good way! Wandering the streets in the early morning is like being in a ghost town. The most romantic view is the one from across the valley from the Belvedere in Bagnoregio.

FEATURED PHOTO, Promote Your Work Here and Get Noticed group, 4/16/21

FEATURED PHOTO, The Road To Self Promotion group, 2/1/18

Congrats on your feature!

Congratulations on being featured in the FAA Group 'Promote Your Work Here and Get Noticed.' To ensure your feature remains available over time, post your featured image(s) in the Group's featured image archive (l/f and, if you allow pinning, pinned at www.pinterest.ca/tendrelimages/01-promote-your-work-here-get-noticed/)

Congratulations! Your fantastic art has been featured on the M IS FOR MOISTURE themed week, MARCH 29, 2021- APRIL 5. 2021! You are invited to add your wonderful art in the Features Archive Discussion in the ABC GROUP.

One of my favorite places! And a beautiful image to top!

thank you Skyline Photos of America for the feature in The Weekenders group, 11/24/18

Beautiful capture, Joan! I love the colours and the mist! L/F t

thank you Katarzyna for the feature in the Landscapes From Italy- Photographs group, 2/23/18

thank you Frozen in Time Fine Art Photography for the feature in the Your Very Best Photography goup, 2/11/18

thank you Les for the feature in the Topaz Simplify-glow-impression Photo Renderings group, 2/3/18

What an amazing town! Great capture!

thank you Karen for the feature in the Lady Photographers And Artists group, 2/2/18

Revisit to this stunning shot!

I think this is my favorite photo of Italy...ever!!

thank you Judy for the feature in the USA Photographers Only group, 2/1/18

thank you Kim for the feature in The Road To Self Promotion group, 2/1/18

thank you Julie for the feature in the Your Story of Art group, 2/1/18

Magnificent! I've been to Orvieto, but not here.