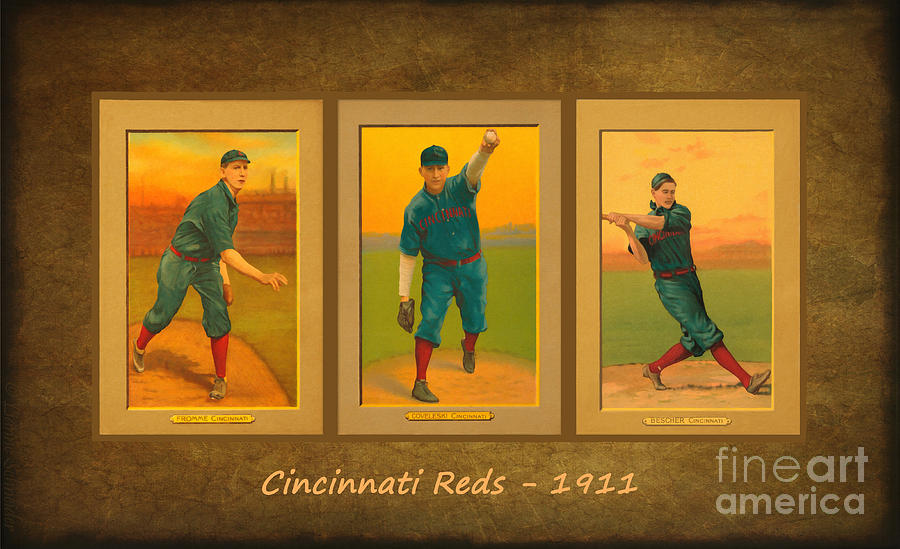 Officially, today, March 31, marks the opening day for Major League Baseball. In actuality, the season this year got under way in Australia on Saturday and here at home with a Sunday night Dodgers-Padres game. For a good many of us, today is a celebration of what has come to be called "America's Pastime."

This image is a hand-painted digital triptych created from small images of vintage baseball cards which are held in the digital collection at the Library of Congress. The original cards and prints from those cards are in the public domain.

Thank you so much to each of the following for featuring this image in these groups:
ART FROM THE PAST - JOUKO
VISUAL VOICE - ANNIE
ROCK THE SALES - JOETTA
PREMIUM FAA ARTISTS - MARINESCU
DIGITAL REALISM - ANNE
MANIPULATION - M AND L CREATIONS
ARTISTS BEST FIVE ART WORKS - TINA

References to baseball as America's pastime can be found as early as the late 1700s. But it took a seven man commission formed in 1903 three years of investigation to finally conclude that baseball is fundamentally an American sport and began on American soil. The commission credited Abner Doubleday with having invented the game.

Modern rules of the game - called the Knickerbocker Rules - were in place before the Civil War. Those rules included 9 man teams, 9 inning games, bases 90 feet apart and required fielders to tag or force the runner as we do today.

"In the 1860s, aided by the War, "New York" style baseball expanded into a national game, as its first governing body, The National Association of Base Ball Players was formed. The NABBP soon expanded into a true national organization, although most of the strongest clubs remained those based in the northeastern part of the country. By the end of 1865, almost 100 clubs were members of the NABBP. By 1867, it ballooned to over 400 members, including some clubs from as far away as San Francisco and Louisiana. The Cincinnati Red Stockings (which ultimately moved to Boston and became the franchise that is now the Atlanta Braves) were the first to so declare themselves as openly professional, and were easily the most aggressive in recruiting the best available players. Twelve clubs, including most of the strongest clubs in the NABBP, ultimately declared themselves professional for the 1869 season" (Wikipedia).

In 1863, the original Cincinnati Red Stockings was founded as baseball's first openly all-professional team. As successful as it was, the team dissolved and moved to Boston. A second Red Stockings team became a charter member of the National League in 1876, but was expelled from the league after the 1880 season, for 'violating' rules which had not yet gone into effect: namely, serving beer at games and allowing their park to be used on Sundays. In 1889, when the third Red Stockings team left the American Association to join the National League, the team dropped "Stockings" from their name and have been simply the Cincinnati Reds ever since.

"The early years of the 20th century were not kind to the Reds - they played most of those years in the league's "second" or lower division and never finished better than 3rd. And although 1911 was another losing season, outfielder Bob Bescher stole 81 bases that year - still a team record. Pitcher Art Fromme pitched in 38 games with 10 wins, 11 losses out of 26 starts. Pitcher Harry Coveleski had a disappointing season in 1910 and was traded to Birmingham. The 1911 season tobacco cards had already gone to press and this original card bears the date 1911. Coveleski's younger brother Stan is a member of the Baseball Hall of Fame" (Wikipedia).

All images and my personal poetry/prose are protected by copyright and may not be reproduced, downloaded, distributed, transmitted, copied, reproduced in derivative works, displayed, published or broadcast by any means or in any form without prior written consent from the artist. My copyright does not imply rights to an underlying public domain image and I make no such claim. Copyright on works derived from or based on images in the public domain applies only to the subsequent manipulation or the digital painting resulting from my own style and interpretation. The original image remains in the public domain and such images are used in accordance with international law

So amazing. My boyfriend plays vintage bball...the losantaville blackstockings wgich is what cincinnat eas called befote. Thr precursor to the Reds. Since i live in Cinci. I love the Reds. I see an angel in the pixels in every photo particularly oops...fotgot name but it's a ship

This is a wonderful presentation Lianne. the colors fit very well, a nostalgic image beautiful work!

Lianne, This is So Gorgeous! Baseball is in my blood and we have some family history with another team... Congrats on your sale and Most Gorgeous work!! like.add

Let me know the team and I'll try to put a triptych together of old players!! Thanks so much Chrisann xo

Congratulations on your sale, well done.

Congratulations on your sale Lianne!

Excellent idea and very well done. Congratulations on your sale.

Congrats on your sale Lianne!

Nice one Lianne! Congratulations on your sale!

Just fabulous, Lianne. Your style and creativity are a delight to behold. L/fv/tw/g+

Robert - thank you so very much for featuring this image in FAA FEATURED IMAGES. I'm enormously honored by that.

Gorgeous use of colors and such a wonderful work you created, Lianne. f,l

Lianne, This is fantastic..I am a huge baseball fan. I really like the history associated with this wonderful work of art. Nicely done. v/f

Thank you so much Sharon for featuring this vintage piece in your fabulous group SIGNATURE STYLE ART. That means more to me than I can say!!

Excellent work, Lianne! Love very much the colors you used for this triptych collage! :) LFG+

So many hosts to thank for featuring this painting in their groups...I'm afraid I'll have to list them to the right in the description but I am immensely grateful. And to each of you who have come by in the past few days - I will definitely be visiting you this afternoon. I've a funeral to go to this morning but I'll be by when I get back. In the meantime, please know that I cherish each comment.

Thank you so much Annie and Joetta for featuring this opening day image in your terrific groups - VISUAL VOICE and ROCK THE SALES. I'm truly honored and very happy. To everyone else who stopped in - thank you from my heart - I hope I've been by your pages to thank you in person but if I haven't I will soon!!

Wonderful work, Lianne. So love the history associated with this beautiful piece. v/f

Wonderful colors Lianne! Absolutely beautiful! And the composition is perfect! And your technique is beautiful! Love this!!! L/F!

A baseball fan in my childhood and loved to play it, too, and none of that softball stuff! Great nostalgic handling of this work! v/f

Thank you so much Jouko for featuring this image in ART FROM THE PAST. That means so much to me and I'm very honored!