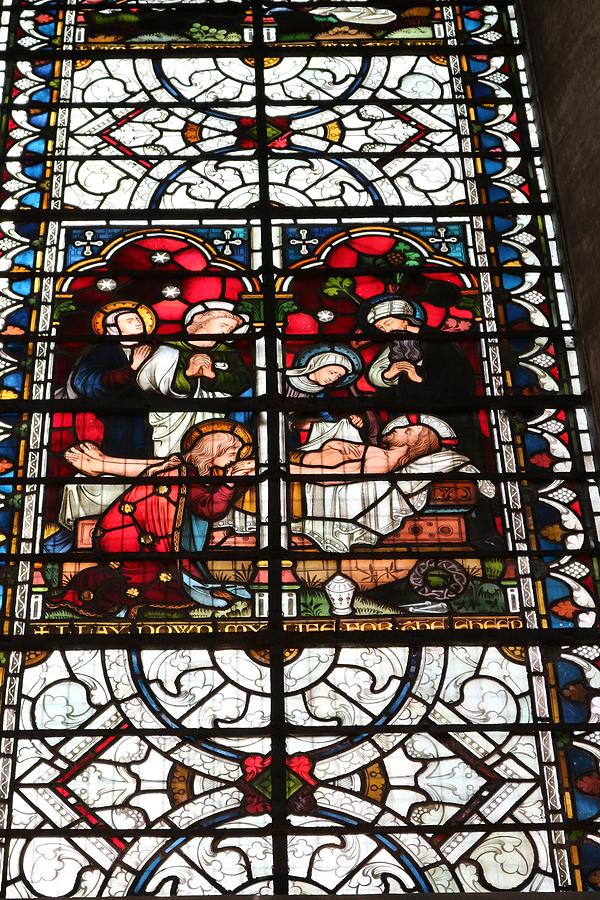 Stained Glass, Salisbury, Wiltshire, UK, England
Salisbury Cathedral, formally known as the Cathedral Church of the Blessed Virgin Mary, is an Anglican cathedral in Salisbury, England. The cathedral is regarded as one of the leading examples of Early English architecture. Its main body was completed in 38 years, from 1220 to 1258. As a response to deteriorating relations between the clergy and the military at Old Sarum Cathedral, the decision was taken to re-site the cathedral, with the seat of the bishopric being moved to New Sarum, or Salisbury The move occurred during the tenure of Richard Poore, a rich man who gave the land on which the new cathedral was built.
Construction was paid for by donations, principally from the canons and vicars of southeast England, who were asked to contribute a fixed annual sum until the building was completed. A legend tells that the Bishop of Old Sarum shot an arrow in the direction he would build the cathedral; the arrow hit a deer, which died in the place where Salisbury Cathedral is now. The cathedral crossing, Old Sarum, and Stonehenge are reputed to be aligned on a ley line, although Clive L. N. Ruggles asserts that the site, on marshland, was chosen because a preferred site several miles to the west could not be obtained

The foundation stones were laid on 28 April 1220 by William Longespée, 3rd Earl of Salisbury and by Ela of Salisbury, 3rd Countess of Salisbury.[9][10] Much of the freestone for the cathedral came from the Teffont Evias Quarry. As a result of the high water table on the new site, the cathedral was built on foundations only 4 feet (1.2 m) deep, and by 1258 the nave, transepts, and choir were complete. The only major sections begun later were the cloisters, added in 1240, the chapter house in 1263, the tower and spire, which at 404 feet (123 m) dominated the skyline from 1320. Because most of the cathedral was built in only 38 years, it has a single consistent architectural style, Early English Gothic. In total, 70,000 tons of stone, 3,000 tons of timber and 450 tons of lead were used in the construction of the cathedral.

Salisbury Cathedral is unusual for its tall and narrow nave, which has visual accentuation from the use of light grey Chilmark stone for the walls and dark polished Purbeck marble for the columns. It has three levels: a tall pointed arcade, an open gallery and a small clerestory.[ Lined up between the pillars are notable tombs such as that of William Longespée, half brother of King John and the illegitimate son of Henry II, who was the first person to be buried in the cathedral

Yes, I really liked it too