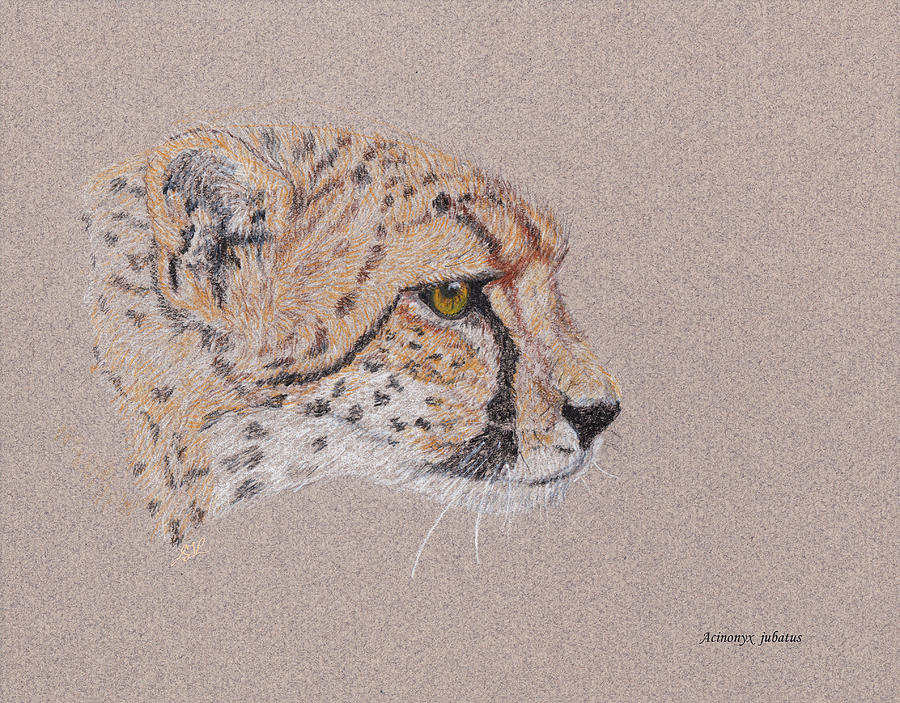 Head of a Cheetah in colored pencil on textured paper.
The cheetah (Acinonyx jubatus) is a large feline inhabiting much of Africa and parts of Iran. It is the only living member of the genus Acinonyx. The fastest land animal in the world, the cheetah is a marvel of evolution and can go from 0 to 60 miles an hour in only three seconds.
Cheetahs are tan in color with black spots all over their bodies. They can also be distinguished from other big cats by their smaller size, spotted coats, small heads and ears and distinctive "tear stripes" that stretch from the corner of the eye to the side of the nose. This cat is notable for modifications in the species' paws, being one of the few felids with only semi-retractable claws.
Found mostly in open and partially open savannah, cheetahs rely on tall grasses for camouflage when hunting. They are diurnal (more active in the day) animals and hunt mostly during the late morning or early evening. Only half of the chases, which last from 20 - 60 seconds, are successful.
Cheetahs knock their prey to the ground and kill with a suffocating bite to the neck. They must eat quickly before they lose the kills to other bigger or more aggressive carnivores.
Cheetahs are also typically solitary animals. While males sometimes live with a small group of brothers from the same litter, females generally raise cubs by themselves for about a year. Cubs are smoky in color with long, woolly hair – called a mantle – running down their backs. This mantle is thought to camouflage cubs in grass, concealing them from predators. Mothers move cubs to new hiding places every few days. At 5 - 6 weeks, cubs follow the mother and begin eating from their kills.
In the wild, the cheetah is a prolific breeder, with up to nine cubs in a litter. The majority of cubs do not survive to adulthood, mainly as a result of depredation from other predators. The rate of cub mortality varies from area to area, from 50% to 75%,[11] and in extreme cases such as the Serengeti ecosystem, up to 90%. Cheetahs are notoriously poor breeders in captivity, though several organizations, such as the De Wildt Cheetah and Wildlife Centre, have succeeded in breeding high numbers of cubs.
The cheetah is listed as vulnerable, facing various threats including competition with and predation by other carnivores, a gene pool with very low variability, and persecution by mankind.

Many thanks for the feature in Big Cats Fine Art ,Barbara I really appreciate it.

Many thanks everyone for your kind comments!

Beautiful drawing of this beautiful animal.

wonderful artwork; his eyes are captivating

Thank you so much Barbara for the feature in Big Cats FINE ART, I really appreciate it!

Thank you so much Marcia

Thank you so much Kim, for the feature in The Road to Self Promotion, I truly appreciate it!

Thank you all for your nice comments I really appreciate them.