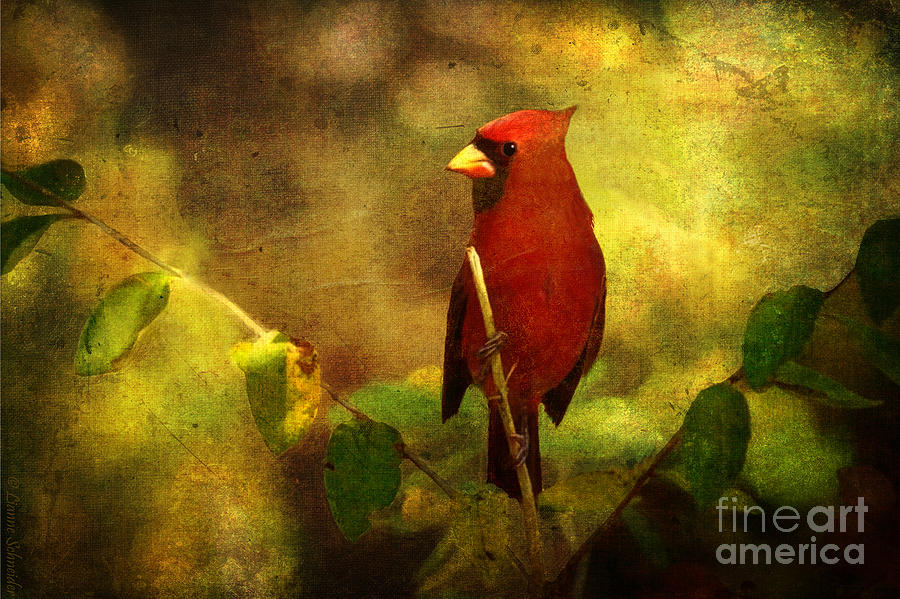 Digitally hand-painted to achieve the effect of a tapestry - part of a set of six bird paintings done in this style.

The Christmas Cardinal has a very special significance and that is the reason that you can find so many ornaments, decorations and gifts.

From All About Birds:

The male Northern Cardinal is perhaps responsible for getting more people to open up a field guide than any other bird. They're a perfect combination of familiarity, conspicuousness, and style: a shade of red you can't take your eyes off. Even the brown females sport a sharp crest and warm red accents. Cardinals don't migrate and they don't molt into a dull plumage, so they're still breathtaking in winter's snowy backyards. In summer, their sweet whistles are one of the first sounds of the morning.

Only a few female North American songbirds sing, but the female Northern Cardinal does, and often while sitting on the nest. This may give the male information about when to bring food to the nest. A mated pair shares song phrases, but the female may sing a longer and slightly more complex song than the male.
Many people are perplexed each spring by the sight of a cardinal attacking its reflection in a window, car mirror, or shiny bumper. Both males and females do this, and most often in spring and early summer when they are obsessed with defending their territory against any intruders. Birds may spend hours fighting these intruders without giving up. A few weeks later, as levels of aggressive hormones subside, these attacks should end (though one female kept up this behavior every day or so for six months without stopping).
The male cardinal fiercely defends its breeding territory from other males. When a male sees its reflection in glass surfaces, it frequently will spend hours fighting the imaginary intruder.
A perennial favorite among people, the Northern Cardinal is the state bird of seven states.
The oldest recorded Northern Cardinal was 15 years 9 months old.

Rare Yellow Cardinal -
(I have a pair of true yellow cardinals of which I have a number of pictures - not good enough to post - that visited my backyard a couple of years but I have not seen them yet this winter).

It is apparently a rare mutation -
The first documented yellow Northern cardinal was "collected" in 1989 by the Museum of Natural Science at Louisiana State University, according to Hill's research paper.

Typical cardinals get their rich red feathers by metabolizing their food into a certain pigment, Palmer-Ball said. With the yellow Northern cardinals - not to be confused with a separate South American species known simply as a yellow cardinal - a mutation causes the metabolic process to create a different type of pigment.

All images and my personal poetry/prose are protected by copyright and may not be reproduced, downloaded, distributed, transmitted, copied, reproduced in derivative works, displayed, published or broadcast by any means or in any form without prior written consent from the artist. Copyright on works derived from or based on images in the public domain applies only to the subsequent manipulation or painting resulting from my changes. The original image remains in the public domain and such images are used with in accordance with international copyright laws.

A fantastic creation that is so beautiful Lianne. A stunning work dear Lianne.

Congratulations! This is quite an honor!!

Wonderful and magical! congrats on your feature!

Thank you so very much Chuck and Taikan for featuring this image in your amazing groups AAA IMAGES and THE BEST 30000 ARTWORKS. What a wonderful honor.

Thank you so much Joe for the feature in 4000 AND UP. I'm really honored by that.

Wonderfully captured--love the coloring and textures

A brilliant and vivid composition with great color and mood. Absolutely delightful creation!

Such wonderful compositions you gift us dear Lianne , radiant in colour and beautifully crafted art my friend .. Wow

Oh, Lianne, I so love your set of bird paintings! This brilliantly colored fellow looks marvelous against that gorgeous background. Your work has such a beautiful glowing dreamlike effect that is fascinating and lovely. L/F and P

this is heart felt. a wonderful piece. F/L

The cardinal is so rare these days. Delighted you've captured him here.

A ruby....so wonderful Lianne...so perfectly placed on the right spot of light and dimensions. So beautifullly texturized and so tenderly done. Rosa

A huge and heartfelt thank you to everyone who has stopped by in the past week or so to leave such lovely comments. And a special thank you to Roseann and David for featuring this cheery cardinal in their groups: DIGITAL ART AND RESOURCES and DIGITALLY RE-IMAGINED PHOTOS. I'm so honored and grateful. And a special thanks to the group MEMORIES AND NOSTALGIA for featuring my work in general this month.

Beautiful, Lianne!!! Congratulations on your special feature in Memories And Nostalgia group! L/F/T/G+

Another vote for this beauty!

My most sincere thanks to Ella, Nadine and Bob and Rose for featuring this work in their wonderful groups - NATURE WILDLIFE SUNSETS AND SUNRISES, ARTIST NEWS, and ARTISTS OF WESTERN NEW YORK. I apologize for taking so long to express my gratitude - holidays and family - but I will be by to thank you in person as soon as I get back in a few more days.

A huge heartfelt thank you to all of you who have come by to leave such encouraging words - that is such a precious gift to give a fellow artist. And I plan to return your gifts in kind by visiting your work just as soon as possible after the New Year. I'm still enjoying a little "off" time with family. Happy New Year to you all!!

OMG Lianne! I just love this! The light is exquisite and the use of texture is perfect! And the bright red of the cardinal is so rich and luscious....what a feast for the eye! A real favorite my dear! L/F

Ah you sweet woman - your enthusiasm is actually inspiring! I've been a bit lacking in the inspiration department lately! What a lovely New Year's gift! And Happy New Year to you too Sandi - hope it's a year filled with joys and blessings. xo

Fantastic lighting and colors-love it :)!! l/f

F/L This is terrific work! It slipped by me, somehow, and now I have to get into a loooooong line of admirers:>) Great information, as always, and a magical image that only you could create! Happy New Year, dear Lianne.

You are so dear Carol - thank you so so much my friend. A very happy, healthy and blessed New Year to you too - may it be a joyous one!!

Love your Cardinal ~ they are one of my favorites and yours now mine too! xx

The tones and textures are so perfect for a holiday image, great work!!! v,f,t,g+,p

How beautiful Lianne incredible mood in this painting! LF

Lianne, oh, this Christmas Cardinal is enchanting and so beautiful. The cardinal is our state bird. I will be sure to add a red cardinal to our Christmas tree to bring good luck, as mentioned in your well done description. Thank you dearly for your comments. I love the way you processed this fine image. LF

This is just beautiful, Lianne... such wonderful colors and tones!! l/f

What a charm, what a treasure ! Splendid tones and the gorgeous cardinal has such an innocent expression. Exquisite work ! f,v

What a marvelous cardinal image and I really like your treatment Lianne.. fv

Barbara, Ella and Nadine and Bob - I'm so thrilled that you've chosen to feature this in your wonderful groups: MOTIVATION MEDITATION INSPIRATION, NATURE WILDLIFE SUNSETS AND SUNRISES, and ARTISTS NEWS. I'm so very grateful.