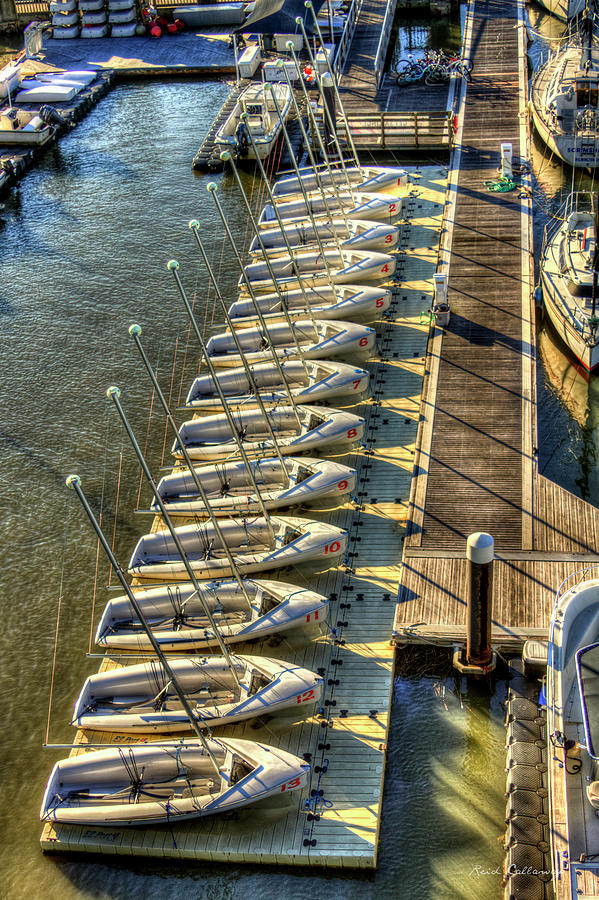 Note:
This image won First Place in the Small Crafts Only At the Dock contest on Fine Art America 7/6/2022!

Charleston is the oldest and second-largest city in the U.S. state of South Carolina, the county seat of Charleston County, and the principal city in the Charleston-North Charleston-Summerville Metropolitan Statistical Area. The city lies just south of the geographical midpoint of South Carolina's coastline and is located on Charleston Harbor, an inlet of the Atlantic Ocean formed by the confluence of the Ashley and Cooper Rivers, or, as is locally expressed, "where the Cooper and Ashley Rivers come together to form the Atlantic Ocean."

Founded in 1670 as Charles Town in honor of King Charles II of England, Charleston adopted its present name in 1783. It moved to its present location on Oyster Point in 1680 from a location on the west bank of the Ashley River known as Albemarle Point. By 1690, Charles Town was the fifth-largest city in North America, and it remained among the 10 largest cities in the United States through the 1840 census. With a 2010 census population of 120,083 (and a 2014 estimate of 130,113), current trends put Charleston as the fastest-growing municipality in South Carolina. The population of the Charleston metropolitan area, comprising Berkeley, Charleston, and Dorchester Counties, was counted by the 2014 estimate at 727,689 the third-largest in the state and the 78th-largest metropolitan statistical area in the United States.
Known for its rich history, well-preserved architecture, distinguished restaurants, and mannerly people, Charleston is a popular tourist destination and has received a large number of accolades, including "America's Most Friendly City" by Travel + Leisure in 2011 and in 2013 and 2014 by Cond- Nast Traveler, and also "the most polite and hospitable city in America" by Southern Living magazine.

According to the United States Census Bureau, the city has a total area of 127.5 square miles (330.2 km2), of which 109.0 square miles (282.2 km2) is land and 18.5 square miles (47.9 km2) is covered by water. The old city is located on a peninsula at the point where, as Charlestonians say, "The Ashley and the Cooper Rivers come together to form the Atlantic Ocean." The entire peninsula is very low, some is landfill material, and as such, frequently floods during heavy rains, storm surges, and unusually high tides. The city limits have expanded across the Ashley River from the peninsula, encompassing the majority of West Ashley as well as James Island and some of Johns Island. The city limits also have expanded across the Cooper River, encompassing Daniel Island and the Cainhoy area. North Charleston blocks any expansion up the peninsula, and Mount Pleasant occupies the land directly east of the Cooper River.


The tidal rivers (Wando, Cooper, Stono, and Ashley) are evidence of a submergent or drowned coastline. There is a submerged river delta off the mouth of the harbor, and the Cooper River is deep, affording a good location for a port.

The Fine Art America logo will NOT appear on your purchased image.
<(((><
Comments, Likes and Favorites are appreciated...😎

Thank you Janis Vaiba for featuring my artwork in our group….Just perfect! 7/18/2022

Thank you Jenny Revitz Soper for featuring my artwork in our group.... No Place Like Home! 7/8/2022

Thank you Kathi Isserman for featuring my artwork in our group... Showcasing The South! 7/8/2022

CONGRATULATIONS your EXCEPTIONAL image has been FEATURED on the HOME PAGE of SHOWCASING THE SOUTH GROUP. Please add this to the discussion 2022 “FEATURED IMAGE ARCHIVE THREAD.” L Thank you for participating in the group.

CONGRATULATIONS! It is my great pleasure to FEATURE your artwork on the homepage of the group No Place Like Home, 7/6/2022. You are invited to post it in the Group's Features Discussion thread for posterity or any other thread that fits!

Thank you Gary for admiring my artwork and for making this image one of your personal Favorites! 7/6/2022

Thank you Kay for your kind words, the heads-up and for making this image one of your personal Favorites! 7/6/2022

Congratulations on your top finish in the Small Crafts Only At the Dock contest! voted l/f

Thank you Doug Norkum for featuring my artwork in our group...H D R Photography! 3/2/2021

Thank you Anna for your kind words!

Hey Ann, this was captured from the bridge over the harbor!

Thank you Laura Ragland for featuring my artwork in our group... WeatherUnderground! 7/9/2016

Thank you Frozen in Time Fine Art Photography for featuring my artwork in our group.... The Niche! 6/6/2016

That line-up creates some great textures!

Thank you Dan Marinescu for featuring my artwork in our group... Premium FAA Artists! 5/27/2016

Thank you Karen Silvestri for featuring my artwork in the group......Nature Landmarks Landscapes! 5/13/2016