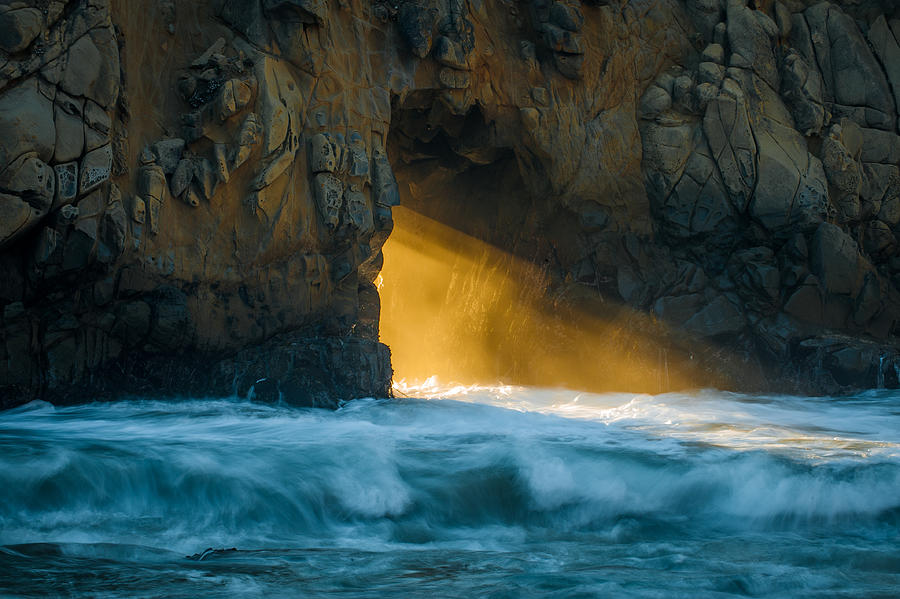 This fine art photograph of the Keyhole Arch aptly titled Chaos was made while standing on the sandy beach at Julia Pfeiffer Burns State Park in Big Sur, California. The light rays from the evening sun pouring through the tunnel, contrasting the static rock formation against the chaotic strength of the waves and surf from the Pacific Ocean make for an extremely dramatic and motivating photograph.

This is my favorite of all of my images in my portfolio on Fine Art America. See also the black and white version of this image titled Chaos - BW. When I made this image I had been watching the waves crashing around and through this tunnel. I was captivated by the strength and power of the ocean pounding on the unyielding rocks while the sunlight pours through the tunnel as if nothing is going on. It reminded me of the struggles that people living with MS must be going through, the turmoil in their bodies (the massive waves) versus their own internal fortitude and determination (the rock formation), and their faith mirrored by the light in the tunnel. I titled this image CHAOS. Later realized that this turmoil applies not only to those living with MS but also to those living with any devastating disease. A beautiful 16x24 canvas of this image is hanging on the wall at the Carrollton, Texas office of the National Multiple Sclerosis Society and another 16x20 canvas hangs at the home of a young man living with Angelman's Syndrome. The title and the meaning behind the image struck home to both of these particular buyers.

Love that shaft of sunlight!

This artwork is mesmerizing and sure to spark the wonder of anyone who sees it!

Thank you Mike. I loved exploring your gallery in Carmel-by-the-Sea.

This is just superb, George ! l/f/t

Thank you. This is one of my favorites.

Hi George... I like your image. Pfeiffer Beach is such a great place and you have made an excellent photograph there. Well done... Cheers Bob fv

Thank you Bob. &Essex, it was an amazing experience.

this is just unreal... very nice work... the sunbeam is just heavenly... L/F

What an excellent picture! Love the colors in this

Incredible image! Has a mystique about it.

Absolutely beautiful work, George... masterfully photographed and presented! A stunning work of art illustrating hope and faith in the midst of chaos. Massive blessings on your artistry! Saw this beauty featured in "The Artistic Photographer". Congratulations! F/L

Thank you Brian. I really the comments.

Continues as one of my favs in your portfolio! Beautiful light!

George, this is by far my favorite picture in your portfolio. It was nice reading about how it came to be. LF

Fantastic, how did you get into a position for this shot? on a boat?

Thanks for the comment Darrell. I am standing on the shoreline just above the surf crashing on the beach. I shot this on the long end of my 70-200 to compress the distance between the waves and rock.

This is stunning, the light shining thru the beautiful and the stone is wonderful with all the different textures! L

An amazing capture. The color of the water and the ruggedness of the rock along with wonderful light make for a perfect scene.

Wow this is a spectacular image George, those light rays are awesome!!! L/F

Magnigicent, congratulations on your sale!

Great shot, I love the motion and looking at the rock I see images and faces. Probably just me but perfect exposure.

Gorgeous detail and composition. Especially catching the net in the water just on the left side of the opening. Beautiful.

Thank you Judy for the kind words and the Feature.