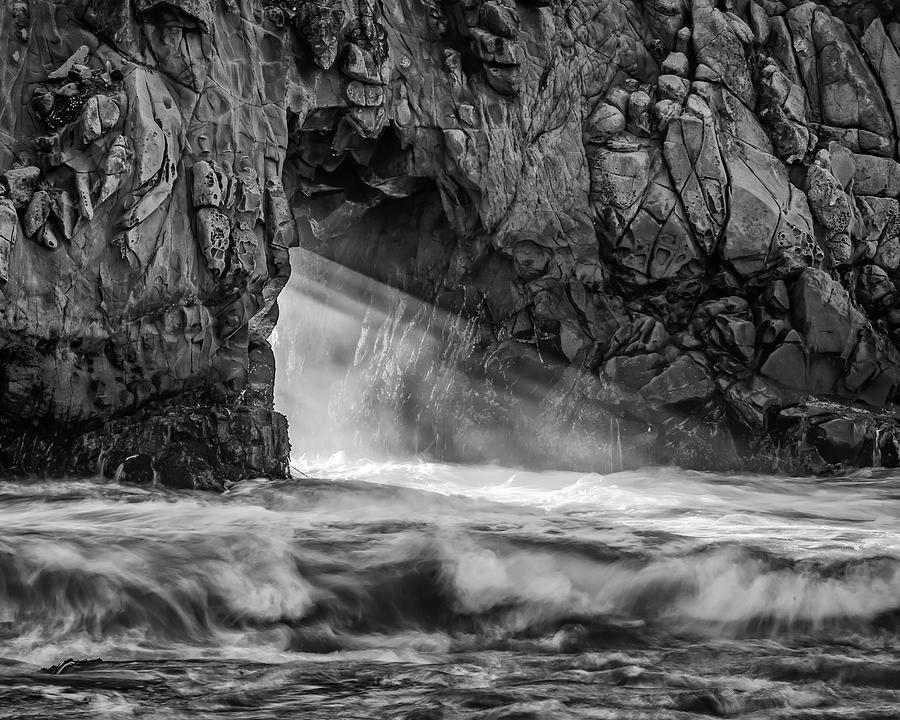 This fine art black and white photograph of the Keyhole Arch aptly titled Chaos was made while standing on the sandy beach at Julia Pfeiffer Burns State Park in Big Sur, California. The light rays from the evening sun pouring through the tunnel, contrasting the static rock formation against the chaotic strength of the waves and surf from the Pacific Ocean make for an extremely dramatic and motivating photograph.

This is one of my favorite of all of my images in my portfolio. See also the color version titled Chaos. When I made this image I had been watching the waves crashing around and through this tunnel. I was captivated by the strength and power of the ocean pounding on the unyielding rocks while the sunlight pours through the tunnel as if nothing is going on. It reminded me of the struggles that people living with MS must be going through, the turmoil in their bodies (the massive waves) versus their own internal fortitude and determination (the rock formation), and their faith mirrored by the light in the tunnel. I titled this image CHAOS. Later realized that this turmoil applies not only to those living with MS but also to those living with any devastating disease. A beautiful 16x24 color canvas of this image is hanging on the wall at the Carrollton, Texas office of the National Multiple Sclerosis Society and another 16x20 canvas hangs at the home of a young man living with Angelman's Syndrome. The title and the meaning behind the image struck home to both of these particular buyers.

Wow! So dramatic, George! I really love this in black and white . . . it gives the viewer the space to really appreciate the patterns, textures and light!.......vf

Thanks Karen. You always have such kind words.

An excellent capture of light, texture, and movement