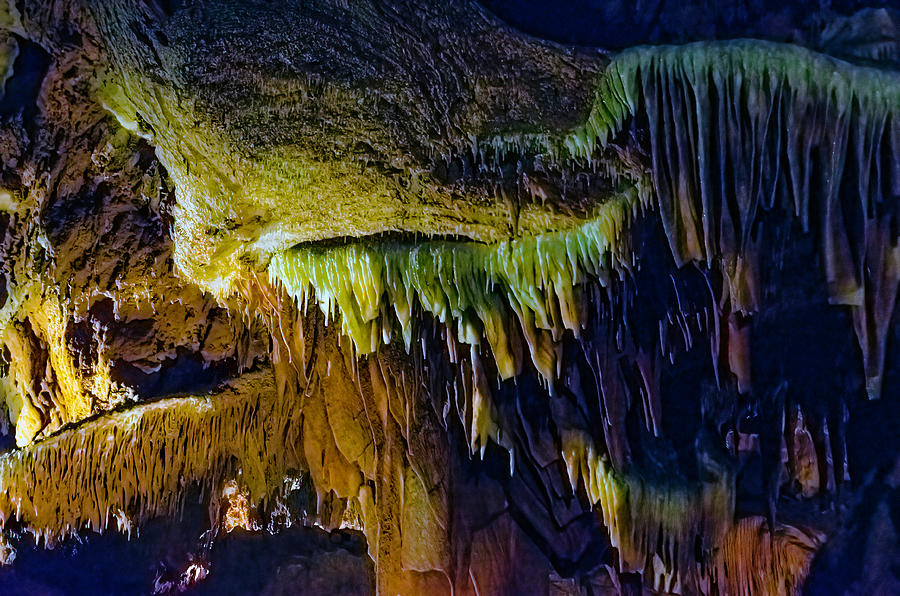 A cave shield forms as calcite-rich seep water under hydrostatic pressure is forced from tiny cracks in a cave wall, ceiling or occasionally, floor. As this seep water loses carbon dioxide to the cave air, calcite is deposited as parallel extensions to the cracked walls. The result: two thin, sandwiched disks separated only by a capillary, sheet-like void that feeds their growth.

Often, seep water feeding a shield does not lose all of its carbon dioxide at the shield rim.. Additional CO2 loss by water slowly dribbling from the shield rim gives rise to draperies, as seen in the left photo. If a shield becomes clogged, perhaps due to sealing of its rim during dry spells, backed-up seep water may find escape through perforations in the shield disks. This may form stactites, as in the lower photo, or masses of tangled helictites.

According to legend, the cavern system was discovered in 1804 by 17-year-old Bernard Weyer, manager of the local distillery, looking for a missing trap. Originally, it was called Amend's cave, named after the land's owner, Matthias Amend. In two years, Amend opened it for the public, one of the first show caves of the United States. The locals, however, preferred to name it after the original discoverer.[3]

During the Civil War and the Valley Campaign, the cave was visited by both Confederate and Union soldiers. During their visits, over 230 soldiers signed their names on the cave's walls. One noted signature is that of W.W. Miles, signed on September 26, 1864. Once, Confederate General Stonewall Jackson was apparently camped near Port Republic and allowed his soldiers to visit the caverns.[4]

In 2004, the Grand Caverns management requested that the Virginia Region chapter of the National Speleological Society conduct a re-survey of the cave system which had not been done since the 1930s. With completion of the re-survey in the original, commercial portion of the cave (2,651 meters or 8,698 feet), the cavers pushed through a 20-centimeter-high (7.9 in) passage, which led them to 3,432 meters (11,260 ft) of unexplored cave. The total surveyed passage now stands at 6,083 meters (19,957 ft; 3.780 mi) making Grand Caverns the 215th longest surveyed cave in the United States as of May 2008.[5] The newly discovered portion of cave (closed to the public) is highly decorated with many forms of speleothems, including the celebrated shields. The passages to the north are fairly dry with abundant brilliant white formations, earning them the name "New Mexico". The southern portion of the new cave includes a series of large rooms with massive breakdown, the largest of which ("Kentucky") is over 100 meters (330 ft) long by 40 meters (130 ft) wide. The highest and lowest points in the cave are found in the new passage.

CONGRATULATIONS your EXCEPTIONAL image has been FEATURED on the HOME PAGE of Mid-Atlantic States of the USA. Please add this to the discussion 2021 “FEATURED IMAGE ARCHIVE THREAD.” L Thank you for participating in the group.

Thanks Ann for the l/f and your great comment!!

Thank you Carol for your nice comment and L/F!!

Thanks Phil, I appreciate your 'Cool' comment and l/f!!