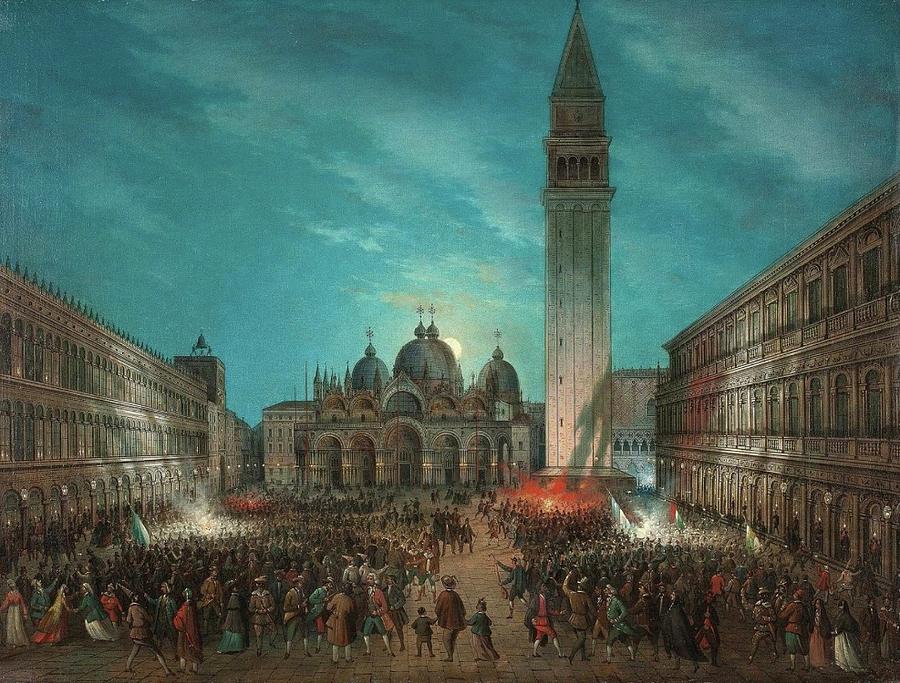 Colle Leone was a painter in Venice and Italy who followed in the footsteps of Canaletto, he painted various Venetian scenes known today, mainly for the Aristocratic Grand Tourist Market. He would have worked alongside the likes of Francesco Zanin, Migliara and other 19th Century Italian View painters based in Venice at that time. The Venice Carnival is now world famous – it always takes place during the ten days leading up to Shrove Tuesday. Carnival, being a pre-lent festival, means ‘farewell to meat’ and is celebrated throughout Italy. It was first held in Venice in the 11th century and consisted of over two months of revelry, until it fell into decline during the 18th century. It was revived in 1979 with great success and nowadays it is a great excuse to don a mask and costume, parade around the city, enjoy the live music in the main squares of the city, the events organised by the tourist board and is a wonderful open-air festival where everyone can join in. Fantastic costumes are displayed in St Mark's Square and Venice is the perfect back-drop for amazing photographs. Carnival in the 18th century began with a series of balls in St Mark's Square, as can be seen on the fresco on the walls of the famous café Quadri's. Fortunes were squandered every night of Carnival in the Ridotto Gambling casino, whatever the social status all the people wore costumes and masks, many connected to the Commedie del'Arte, Harlequin, Columbine, the Plague Doctor and of course the courtesans.