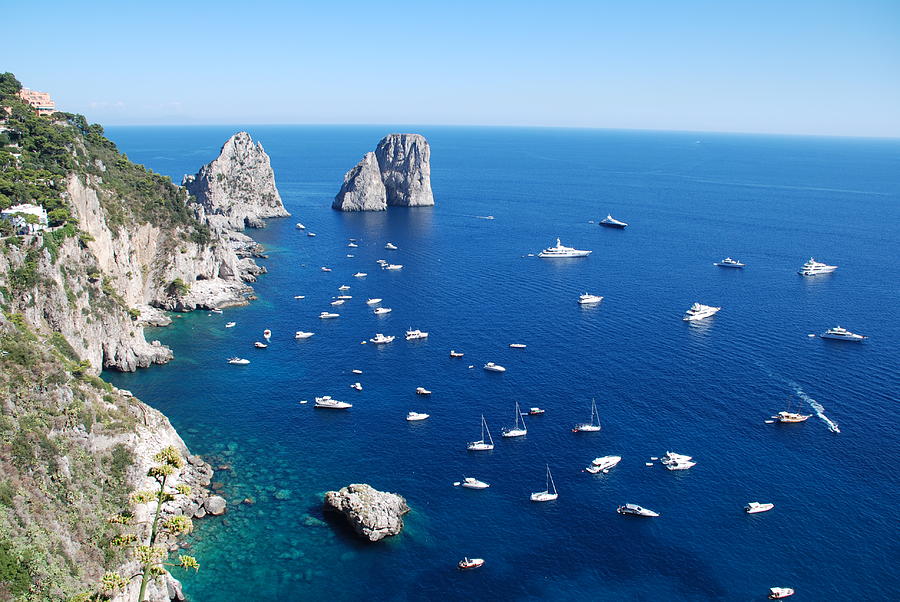 Capri Island is a Mediterranean jewel.
The Faraglioni are three immense, 80-100 meter high stacks, the impressive forms of which have been created by the erosive action of the wind and sea
Capri is in the Bay of Naples, south of the city of Naples and near the tip of the Amalfi Peninsula, in the Campania region of Southern Italy. The island is in the Mediterranean Sea.
Capri is an enchanting and picturesque island made of limestone rock. A favorite with Roman emperors, the rich and famous, artists, and writers, it's still one of the Mediterranean's must-see places. The island's top attraction is the famous Blue Grotto, Grotta Azzurra. Tourists arrive by boat at Marina Grande, the island's main harbor. Beaches are scattered around the island. There are only two towns - Capri, just above Marina Grande, and Anacapri, the higher town. Lemon trees, flowers, and birds are abundant.

Beautiful ! Thank you for your posts to our sharing thread Seascapes in forum.....f/v....V

Fabulous view! Congrats on your sale!

Thank you Austra,it's very kind or you!

Congrats on your sale! -Kim