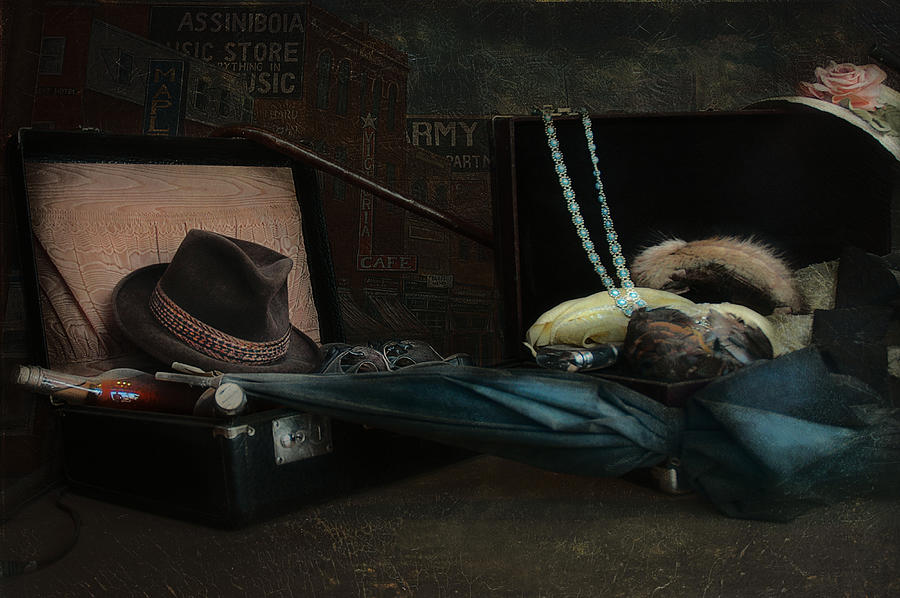 The items in this still life were found displayed in a window of the 'Tunnels of Moose Jaw' tour building in 'Moose Jaw', Canada. They are reported to be from Al Capone and his (well, whatever) female friend. The backgound is taken from a mural on the side of a building in the town.
Mouse Jaw is, per widipedia: "is a city in south-central Saskatchewan, Canada on the Moose Jaw River. It is situated on the Trans-Canada Highway, 77 km (48 mi) west of Regina. Residents of Moose Jaw are known as Moose Javians. Best known as a retirement and tourist city, it serves as a hub to the hundreds of small towns and farms in the surrounding region of Saskatchewan. The city is surrounded by the Rural Municipality of Moose Jaw No. 161.
Marked on a map as Moose Jaw Bone Creek in an 1857 survey by surveyor John Palliser, two theories exist as to how the city got its name. The first is it comes from the Plains Cree name mosc�stani-s�piy meaning "a warm place by the river", indicative of the protection from the weather the Coteau range provides to the river valley containing the city and also the Plains Cree word moose gaw, meaning warm breezes. The other is on the map of the city, the Moose Jaw River is shaped like a moose's jaw.
Moose Jaw is an industrial centre and an important railway junction for the area's agricultural produce. It is known for its giant historical murals on the exterior walls of buildings in its business district, and its tunnels were used for rum-running during Prohibition. CFB Moose Jaw is a NATO flight training school, and is home to the Snowbirds, Canada's military aerobatic air show flight demonstration team. Moose Jaw also has a casino and geothermal spa". There are many murals on buildings in town and one interesting 'motel' reputed to be where Al Capone stayed. Though a bit run down, it has a very cool sign out front.
According to the tour of the 'tunnels imagine that ':You're bootleggers in 1929. You come to Moose Jaw to buy booze from the Capone organization. You've got to learn the ropes and stay out of the way of the local police chief. You start out at Miss Fanny's club and end up in a tunnel, somewhere underground. And the only one who knows the way out is Gus, one of Capone's goons. The Chicago Connection has several flights of stairs" and the tour is exciting. I was impressed with the town and this arrangement - hence the picture - which has been modified as an art piece. Blown up (so to speak) it is quite detailed and expressive. Perfect display for the business that sells 'booze' (or likes antique items related to the days of bootlegging and prohibition.

Thanks for featuring this work in "500 Views"

Congratulations on your feature in 1000 Views! Fl

One of your peers nominated this image in the 1000 views Groups nominated images by your fellow artist in the Special Features #17 promotion discussion. Please visit and pass on the love to another artist.....L/F/Tw

An Excellent image Jeff. It captured my time. Nominated for special feature in the 1000 view group T/F...

Thanks so much Diana. Very much appreciated.

Congratulations, your wonderful work is featured on the home page of the quadruple-curated group, All Stars. Featured images are changed weekly, so for your image to remain visible for potential buyers who visit the group later, please post your featured images in the featured discussion thread for 2021.

Thanks so much Barbie. Regards.

Thanks so much Christopher.

Hi Jeff... I like your image. Great stuff as always... Cheers Bob fv

Thanks for this feature.

Thanks so much Randi. Really appreciate your look and comment/v.

.... Great subject, texture, composition, and color... Today it was Published in the Internet publication ARTISTS NEWS.... Anyone can Just Highlight this link ---- http://bit.ly/RVPlpf - Use Ctl-C to copy and Ctl-V ---- to put it into the Browser Address, to view the publication. You can then, Tweet, FB, and email, etc a copy of the publication, to just anyone you feel would be interested. Happy Promoting! :-)

Thanks Nadine and Bob. Please check out the newest version which I think is more complete and interesting.

Thanks Odd. This image is composed of three layers of photos. The items were in a storefront window in Moosejaw, Canada....which provides tours of the 'tunnels' made by Al Capone when he avoided the authorities (police) in the US. The items are reputed to be his. The background comes from a photo of a mural that is on a building in the town. I am pleased that you like it. The image really pops when enlarged.