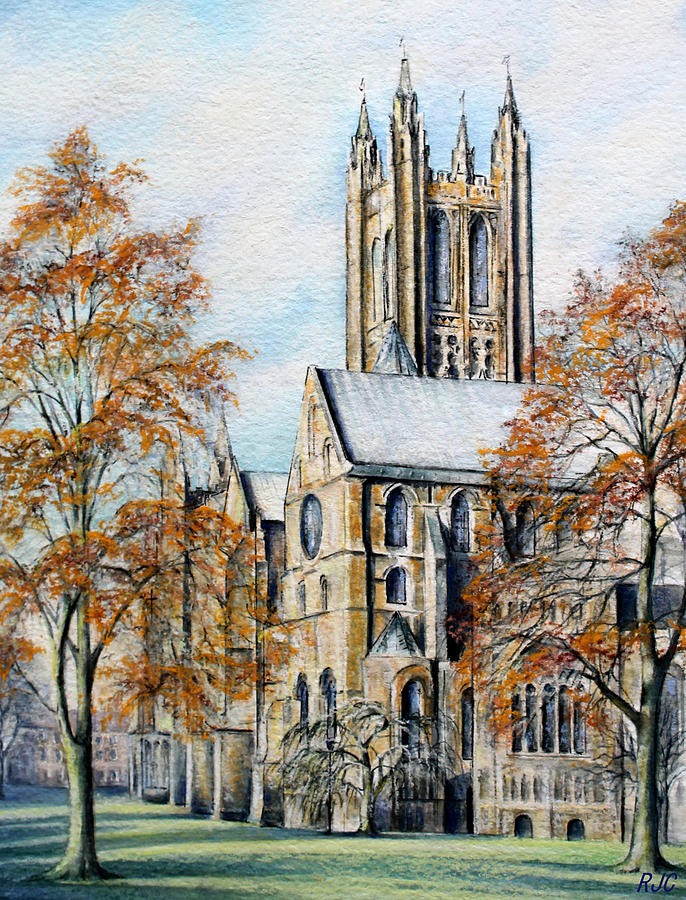 Canterbury Cathedral is one of the oldest Christian structures in England. It was founded by Augustine in 597 A.D. Having been destroyed by fire in 1067, it was completely rebuilt. Further fire damage resulted in major reconstruction in 1174. The cathedral became a place of pilgrimage after Thomas Becket, the archbishop of Canterbury, was murdered in the cathedral by knights of King Henry II, on 29th December 1170. During the late 14th Century,Geoffrey Chaucer wrote The Canterbury Tales, which is a collection of stories told by jovial pilgrims, as they made their way along The Pilgrims Way, from London to Canterbury.

Wow Rosemary you have painted some amazing and stunning details in this marvelous watercolour painting!! wonderful composition and expression. the energy is very charming. love this masterful art!! L/F/FB

Wow!!! This is amazing Rosemary!LF

Thank you so much, Deepa!

This painting is so wonderfully detailed and toned. Great work Rosemary!

Thank you for your kind comment Betty! Much appreciated!

A crystalline radiance shines in this beautiful scene, Rosemary.

I love this piece. You get the feeling you are there. L/F

Some of the settings in Robin Hood and the Magna Carta are similar to this. Wonderful Cathedrals abound in England and many are filled with impressive history, Lovely work of art. So well done. FAV!

Thank you Reynold, for your thoughtful, and generous, comment!

Thank you very much Sandi!

Thank you very much Khalid.

How beautiful Your work is impeccable and your color beautifully rendered Brava, Rosemary. Warmest regards from the California desert. F/l

Thank you for your generous comment, Maria! Greetings from southern Spain.

Thank you so much Beth!

Rosemary, it is such a privilege to feature to wonderful watercolor image on the group homepage of Artists' Cards - fine art greeting cards. Thank you for sharing!! FAV

Thank you Nancy, for featuring my work in the Artists´Cards group!

Wow!! What an Architectural beauty in this capture!! L/F

What a story behind this work of art of our forefathers, in such a beautiful rendering! You are the specialist to go to!

lovely church painting - this makes the cathedral feel very rural, quite different to its location in the centre of the town. I rather prefer it this way!

Thank you Andy! I have lots of connections with Canterbury, so this is how I remember the cathedral.

What a charming landscape, l/f

All your paintings are outstanding, Rosemary! Lf

Congratulations, Rosemary, on your feature in the group, Book Covers! This is such a beautiful watercolor! :)

Thank you very much, Toni!

Beautiful , Congradulations for your feature in the group" Book Cover ".

Thank you very much, Aline.

Congratulations, your excellent work has been featured on the Book Covers Group. Link: http://fineartamerica.com/groups/book-covers-1-per-day.html?tab=overview

Thank you so much Rosalie, for featuring my work in "Book Covers"!

What a magnificent watercolor with such exquisite detail, Rosemary! The colors, lighting, and shadows are just perfect! L/F

Thank you so much Hazel!

The detail in this beautiful painting is superb Rosemary, a real masterpiece. An outstanding painting of Canterbury Cathedral. L/F.

Thank you very much for featuring my work on Women Painters!

So beautiful work dear Rosemary!! Love your work!! Have a great week my friend!! :-) lfv

You got it nice too much.

Outstanding watercolor Rosemary, as always the detail is amazing, wonderful Autumn artwork of this historic cathedral!...F/T/G+/L

Thank you for your generous comment and support, Donna!

Thank you for your generous support Hanne!

Thank you very much Zina!

This is gorgeous Rosemary! I love the tones and light and shadow, and the detail is amazing! Wonderful work! L/F!

Thank you Nancy...do hope that you, one day, manage to visit Canterbury!