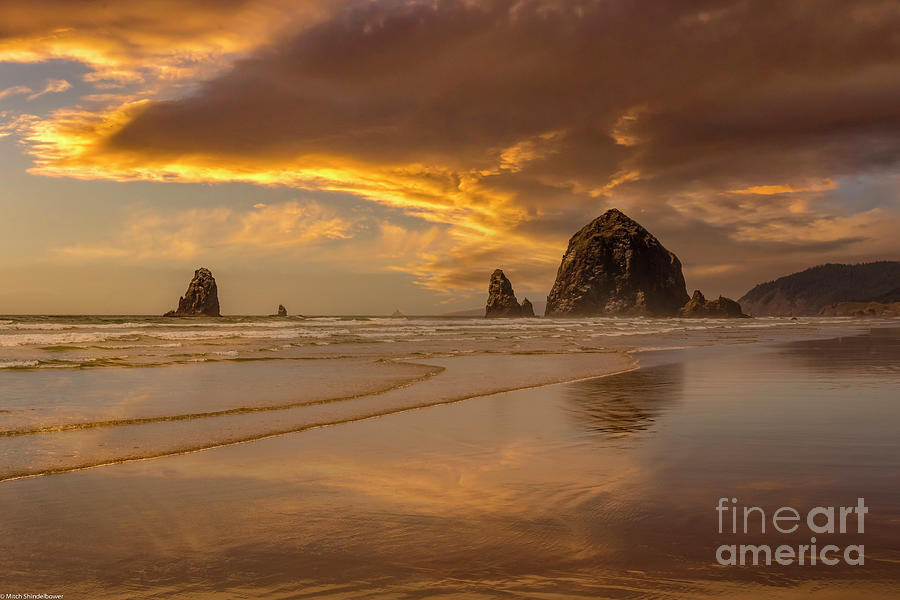 What is now Cannon Beach, as well as the coastal area surrounding it, is part of the traditional territory of the Tillamook tribe.

William Clark, one of the leaders of the Lewis and Clark Expedition, journeyed to Cannon Beach in early 1805. The expedition was wintering at Fort Clatsop, roughly 20 miles (32 km) to the north near the mouth of the Columbia River. In December 1805, two members of the expedition returned to camp with blubber from a whale that had beached several miles south, near the mouth of Ecola Creek. Clark later explored the region himself. From a spot near the western cliffs of the headland he saw "...the grandest and most pleasing prospects which my eyes ever surveyed, in front of a boundless Ocean..." That viewpoint, later dubbed "Clark's Point of View," can be accessed by a hiking trail from Indian Beach in Ecola State Park.

Clark and several of his companions, including Sacagawea, completed a three-day journey on January 10, 1806, to the site of the beached whale. They encountered a group of Native Americans from the Tillamook tribe who were boiling blubber for storage. Clark and his party met with them and successfully bartered for 300 pounds (136 kg) of blubber and some whale oil before returning to Fort Clatsop. There is a wooden whale sculpture commemorating the encounter between Clark's group and the Tillamooks in a small park at the northern end of Hemlock Street.

Clark applied the name "Ekoli" to what is now Ecola Creek. Ehkoli is a Chinook word for "whale".Early settlers later renamed the creek "Elk Creek", and a community with the same name formed nearby.


Looking northwest up the beach
In 1846, a cannon from the US Navy schooner Shark washed ashore just north of Arch Cape, a few miles south of the community. The schooner hit land while attempting to cross the Columbia Bar, also known as the "Graveyard of the Pacific." The cannon, rediscovered in 1898, eventually inspired a name change for the growing community. In 1922, Elk Creek was redubbed Cannon Beach (after the name of the beach that extends south of Ecola Creek for 8 miles (13 km), ending at Arch Cape) at the insistence of the Post Office Department because the name was frequently confused with Eola. Elk Creek itself was renamed Ecola Creek to honor William Clark's original name.[11]

The cannon is now housed in the city's museum and a replica of it can be seen alongside U.S. Route 101.[12] Two more cannons, also believed to have been from the Shark, were discovered on Arch Cape over the weekend of February 16, 2008.[13]

U.S. Highway 101 formerly ran through Cannon Beach. In 1964, a tsunami generated by the Good Friday earthquake came ashore along the coast of the Pacific Northwest. The subsequent flooding inundated parts of Cannon Beach and washed away the highway bridge located on the north side of city. The city, now isolated from the highway, decided to attract visitors by holding a sand castle contest, an event that still continues annually every June.

Lovely capture Mich and congrats on your features! f/l/tw/fb

Congratulations!! This stunning image has been selected to be featured for the week in the “Art Forever with You – Creative and Unique Outdoor Images” Group Home Page. You are welcome to add a preview of this featured image to the group’s discussion post titled “2021 June: Stunning Group Featured Images and Thank-you’s” for a permanent display within the group, to share this achievement with others. Also feel free to post your feature on our group Facebook page: https://www.facebook.com/groups/296998814248643/ Thank you for your participation in the group! ~Jan (June 28, 2021)

Gorgeous moment and shot Mitch! I love the colors and love the reflections!

Aren't Oregon sunset's beautiful? This one just says it all. Wonderful piece.

Thank you Hany ! yes they are !