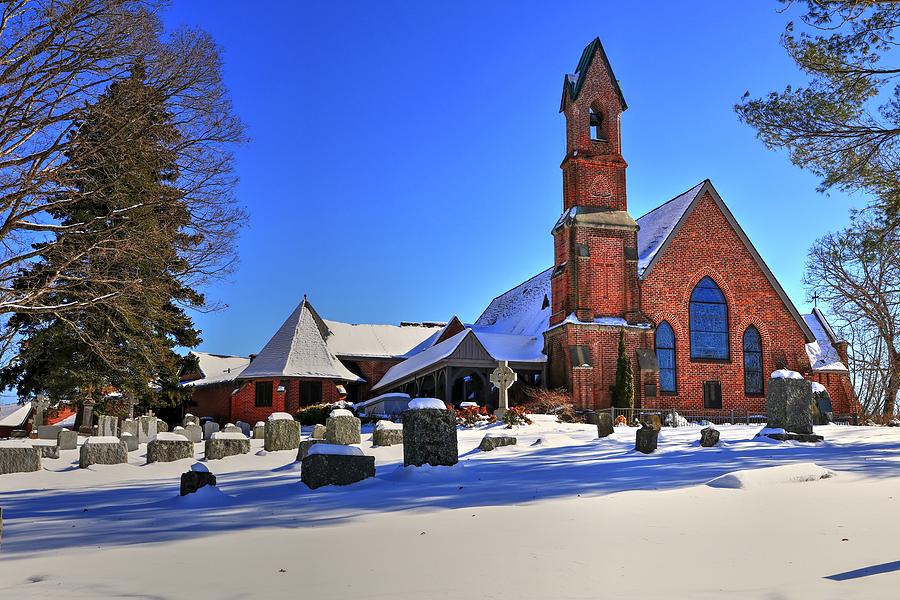 I have always loved this structure reminding me of old world smaller churches in the English country side. The amazing red doors, red-orange brick, and bell tower reaching the deep blue sky which forms a backdrop!


"Travel into the rugged mountains of North Carolina was not easy until 1828, when a turnpike was completed from Charleston to Knoxville. Many people from the Low Country of South Carolina came to the mountains to escape the oppressive summer heat. Some came not only to summer here, but to settle. Such was the case for the founders of Calvary Episcopal Church.

Among those settlers was the Blake family. In 1857, Daniel & Helen Craig Blake, proprietors of a stagecoach inn and way station just north of Fletcher, gathered neighbors in their home, spearheading the founding of Calvary Church.

They donated the land and led the campaign to erect the first building. Using plans based on drawings of Sir Christopher Wren, a 16th century-style building was planned; clay was dug, kilns built, and bricks were fashioned by hand. The building was completed, beautifully sited on a hill and complete with a bell tower. The Rt. Rev. Thomas Atkinson, bishop of North Carolina, made the long journey from Raleigh for the consecration on 21 August 1859.

The founders of Calvary did more than build a building; they set out to found a community. With no public education available in the area, Miss Fanny Blake saw the need for schooling for area children. Donating additional land to Calvary Church, she erected a one-room school house where she taught on both weekdays and Sundays until her death in 1920.

Finding a priest to serve the parish always proved difficult, but strong lay leadership conducted worship and bolstered the community. The grove surrounding Calvary Church became a meeting ground for folk of the area.

The Civil War brought hardship to the area, but the church endured. The grove was often used as a rallying place for volunteers, and the church building and carriage shed were used from time to time as barracks and hospital as well as for worship. The Old Well was a favored watering place for soldiers from both the North and South.

Following the war, the women of the parish raised money for a rectory by holding a weekly market in the carriage shed. With the coming of the Rev. E. A. Osborne in 1877, the parish grew and mission chapels were established. The Word was preached and Sunday School classes were held all over the area, thanks to the zeal of Calvary parishioners.

In the early 20th century, the old turnpike became US Highway 25, the main route through the mountains, and growth came quickly. The heights of the roaring ‘20s and the depths of the depression were both keenly felt, but Calvary Church continued as one of the largest and strongest congregations in the newly formed Diocese of Western North Carolina.

The original church building burned in 1935, with only the brick shell of the building left standing. One stained glass window, the baptismal font, and a few smaller items were saved. The congregation moved quickly to rebuild; Scottish architect S. Grant Alexander was engaged for the design. The nave was lengthened and widened but the west front of the old building with its beautiful bell tower was saved and incorporated into the new building.

The parish grew and flourished with the area. The Rev. G. Mark Jenkins came as rector in 1940, beginning a tenure of 40 years. Parson Jenkins was well known and well loved, ministering to the needs of the entire community. He led the way to the building of a new Parish House – the portion of the facility that houses administrative offices, school rooms and fellowship areas – in 1953. The Parish House then underwent renovation in the early 1980s and, under the leadership of the Rev. David Sailer (rector, 1984-1998), improvements were made in the church: new lighting and a freestanding altar. In 1992, a 2-manual, 23-rank pipe organ by the Holtkamp Company was dedicated after extensive renovations to the chancel and nave. Fr. Sailer oversaw a major renovation and expansion of the Parish House in 1995. Construction was completed in 2000, just as the vestry called the Rev. Victor C. Mansfield as Rector. During Fr. Mansfield’s tenure, the parish explored new ventures in mission work, welcoming numerous community groups into the parish facilities and establishing the Calvary Episcopal Church Food Pantry with the help of other local congregations. Fr. Mansfield retired in 2015, and the Rev. W. Rian Adams served as Rector in 2016 and 2017. The Rev. J. Clarkson was named Priest-in-Charge in February 2018.

Even as the surrounding countryside is converted from farmland into houses, stores and apartment complexes, some of the grace and stability of an earlier age can still be found in the structure and spirit of Calvary Church."