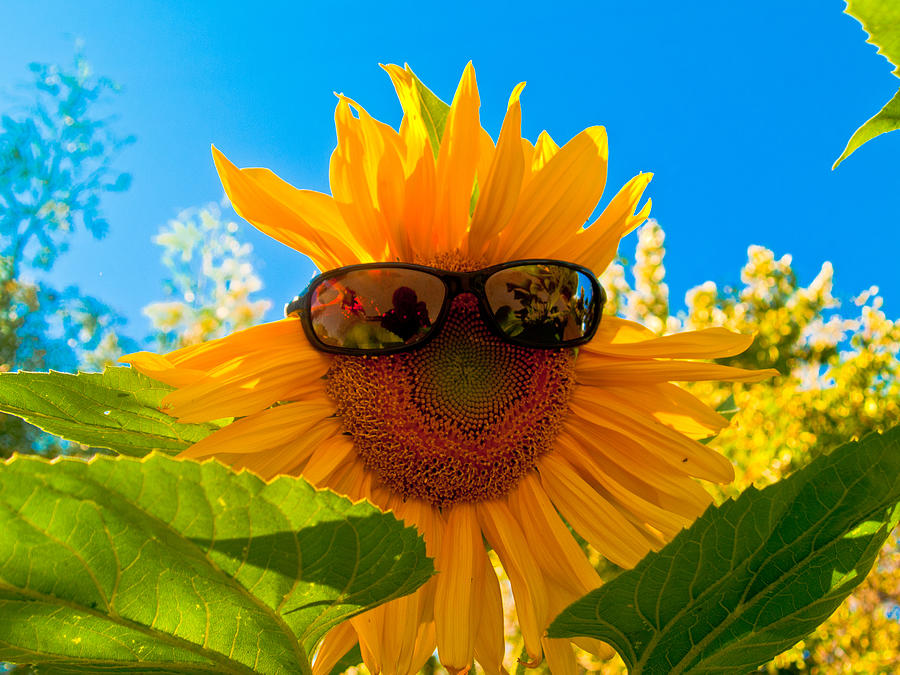 What could be happier than a California sunflower soaking up the California sun.
I was visiting some local wineries with my wife when I put this together. Maybe I was inspired by the wine that had been consumed at the previous winery, who knows. My wife had asked me to hold her glasses as she had to use the ladies room. This particular winery had a large diversity of plants in thier landscaping arrangement, roses, palm trees, assorted bushes, ponds and of course sunflowers.
This image actually was a little tougher to get than I thought it was going to be and even turned out to be a bit of a self portrait, look closely.
The sunflower is an annual flower native to North America. It has a large flowering head and gets it's name from the shape and color of it's flowering head.
Sunflower seeds were brought over to Europe in the 1600's to be used as sunflower oil for cooking.
Leaves of the sunflower can be used for cattle feed and while the fibre in the stems can be used for paper production.
The sunflower has been domesticated and harvested for thousands of years. It was first thought to be harvested in the southwestern part of the Unetd States. The earliest record of domesticated sunflowers was found in what is now Tennessee and ddate to around 2300 BC.
The sunflower is the state flower of Kansas and the national flower of the Ukraine.
During the early growth periods of the sunflower the flower head will follow the position of the sun across the sky. After the sun sets the heads slowly rotate east.
Featured on the following groups:
The World We See
USA Photographers
The Road To Self Promotion
ABC Group
Images That Excite You
Art District
Your Very Best Photography

You made me chuckle - this is wonderful!

congratulations on the sale

Congratulations on the recent sale!

BLESSINGS on your sale